Plus: DCD gets new leadership team 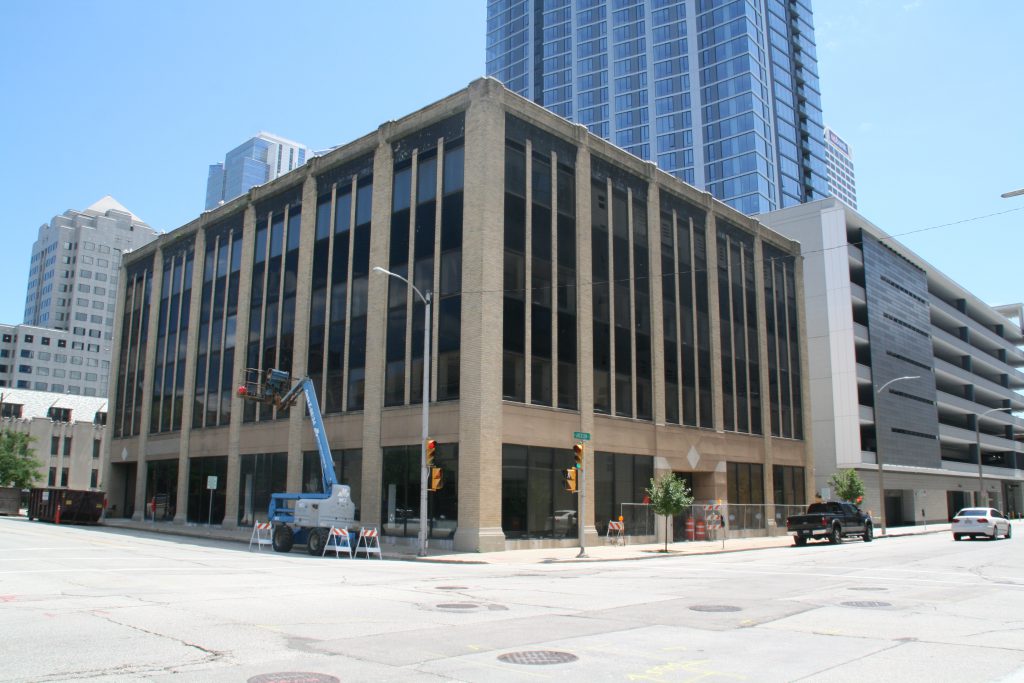 The first floor of the four-story building, located at 790 N. Jackson St., was last occupied by Whiskey Bar. The large tavern closed in January 2019.

Partial demolition work is underway on the building, including removing a small, two-story addition on the building’s south side at a cost of $46,850. Interior demolition, estimated to cost $508,150 according to a city permit, includes removal of elevators, walls and some floor areas.

The two firms and their principals are quite familiar with the area with both firms having offices within a block of the park. Van Buren Management is located at 788 N. Jefferson St. and RINKA is located a block west at 756 N. Milwaukee St. They’ve collaborated a handful of projects in the vicinity, including redesigning the office building where Van Buren is located. The real estate firm also owns the building where the architecture firm is located.

City permits refer to the new building as the Adams Hotel. But how many rooms the new hotel will have remains a question. A permit has yet to be filed to start construction of anything new in the building.

The building, pre-demolition, had 45,089 square feet of space according to city assessment records. It was originally built in 1920 to serve as a car dealership for the Wisconsin-Oakland Company (later Hokanson-Thompson) according to the Wisconsin Historical Society. It was one of at least two buildings in the neighborhood to serve that purpose, the other being what is now the Grohman Museum.

The Jackson Street building was remodeled in 1959 into a general office building and again in 1982 when the now-demolished two-story addition was added.

A permit to begin the demolition work was first applied for in April.

The new hotel comes as other nearby hotel proposals face uncertain futures. A proposed new hotel in the Milwaukee Athletic Club redevelopment was dropped. A redevelopment of the Humphrey Scottish Rite Masonic Center has not moved forward yet.

Three attached hotels are under construction a few blocks to the south. 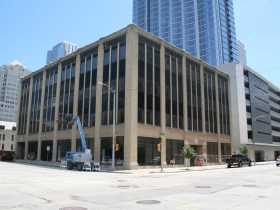 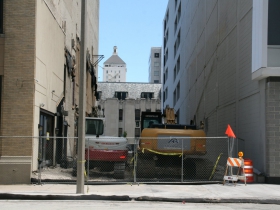 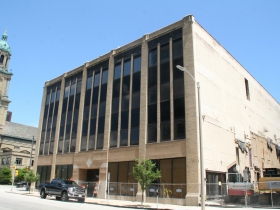 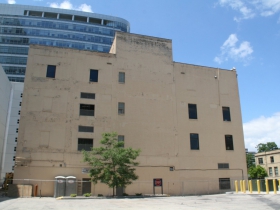 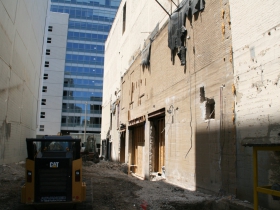 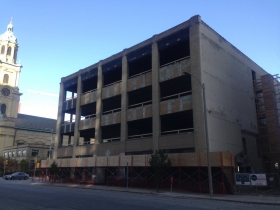 The Department of City Development will have a new leadership team in place by the end of the week.

Longtime Commissioner Rocky Marcoux is retiring and deputy Martha Brown already retired in May. Combined they had worked for the city for 69 years, with Marcoux leading the department for the last 16.

Lafayette Crump was appointed Commissioner by Mayor Tom Barrett and confirmed last week. He’s expected to take the oath of office on Wednesday as he wraps up his work for the Democratic National Convention host committee where he currently serves as deputy chief of staff and chief inclusion officer.

“My plan is not to come in here and blow up what DCD has done… but to expand what is done and to look at new models,” said Crump during his two-hour confirmation hearing. The new commissioner said he would look to improve racial equity and expand economic development beyond Downtown. The council unanimously confirmed his appointment.

Planning manager Vanessa Koster has been promoted to deputy commissioner. Koster has worked for the city for 22 years, including the last 11 as planning manager. In her role, she’s been the lead DCD staff member before the City Plan Commission and frequently appears before the Common Council.

Both Koster and Leichtling earned master’s degrees from the UW-Milwaukee School of Architecture and Urban Planning. Crump received a law degree from Duke University.

The department, which oversees planning, city-owned real estate, commercial corridor development and economic development programs, is funded to have 78 full-time-equivalent employees in 2020.

Apartments Rising Alongside Office Tower at River One

There are now two buildings clearly visible at Michels Corp‘s River One development at the northwest corner of S. 1st St. and W. Becher St.

Michels, which is headquartered in rural Brownsville just outside of Fond du Lac, will anchor the office building with its new civil infrastructure division. Two large staircases that connect the three floors Michels will occupy at the top of the new building are currently visible.

A former surface parking lot for employees of A.O. Smith Corporation will soon be home to a new park.

While much of the former A.O. Smith, and later Tower Automotive, plant campus awaits redevelopment as part of Century City Business Park, the city is moving forward with plans to replace and upgrade the nearby 29th and Melvina park. The park will grow from one acre in size to almost four as the city expands it onto adjacent, long-unused parking lots as part of a $1.1 million project.

Developer Joshua Jeffers has lined up a financing plan to advance his redevelopment of the Milwaukee Journal Sentinel complex into the Journal Square Lofts. It’s an unconventional plan, as many of the developer’s Downtown projects have been.

J. Jeffers & Co. closed on the purchase of the nearly full-block complex in October 2019, paying $8 million for the property, and announced plans to redevelop it. The firm submitted a request to the state for low-income housing tax credits to redevelop much of the property into affordable housing. But when the annual, competitive awards were announced in April, Jeffers was one of many applicants that didn’t secure credits.

Instead of waiting another cycle and applying again, Jeffers is splitting up the multi-building project into different phases.

It’s unusual to see golfing in an urban area, even more so when it’s tucked into a 30,000-square-foot corner lot in one of the oldest neighborhoods in town.

But that’s exactly what takes place at the northeast corner of N. 17th St. and W. State St. in Milwaukee.

It’s “one of the more unusual sights in the city of Milwaukee,” said area Alderman Robert Bauman when a lease extension was before the Common Council’s Public Works Committee in late June.

Since 1992, Robert Byrd has led Bridging the Gap Learning Center, which includes an instructional golf facility at 1600-1624 W. State St. He told the committee that 7,000 students, including many young children of color, played golf for the first time at the facility since it opened in 2000.

Byrd is now fundraising for a $750,000 expansion of the indoor facility. The expansion would accommodate a small conference center, meeting space and a small kitchen.

The expansion is part of a plan to go beyond just teaching the game of golf. “This would allow us the opportunity to provide training in the golf business,” said Byrd.

Thirty-eight small businesses or buildings, 97 percent of which are owned by entrepreneurs of color, were named winners in the second round of LISC Milwaukee‘s Brew City Match program.

The program, backed by a $3.5 million grant from Chase, is focused on small business development and commercial property revitalization in the city’s historic commercial corridors.

In total, the 38 winners span four different programs focused on everything from developing business plans to finding space and improving properties. Of the participating businesses, 97 percent are run by entrepreneurs of color and 77 percent are owned by women. Most of the businesses are small entities that Brew City Match will help get off the ground. But others are established or emerging firms that Brew City Match will partner with to rehabilitate vacant or underutilized commercial properties.