Shepard Fairey, designer of iconic Obama Hope image, will bring his work to Milwaukee in time for DNC. 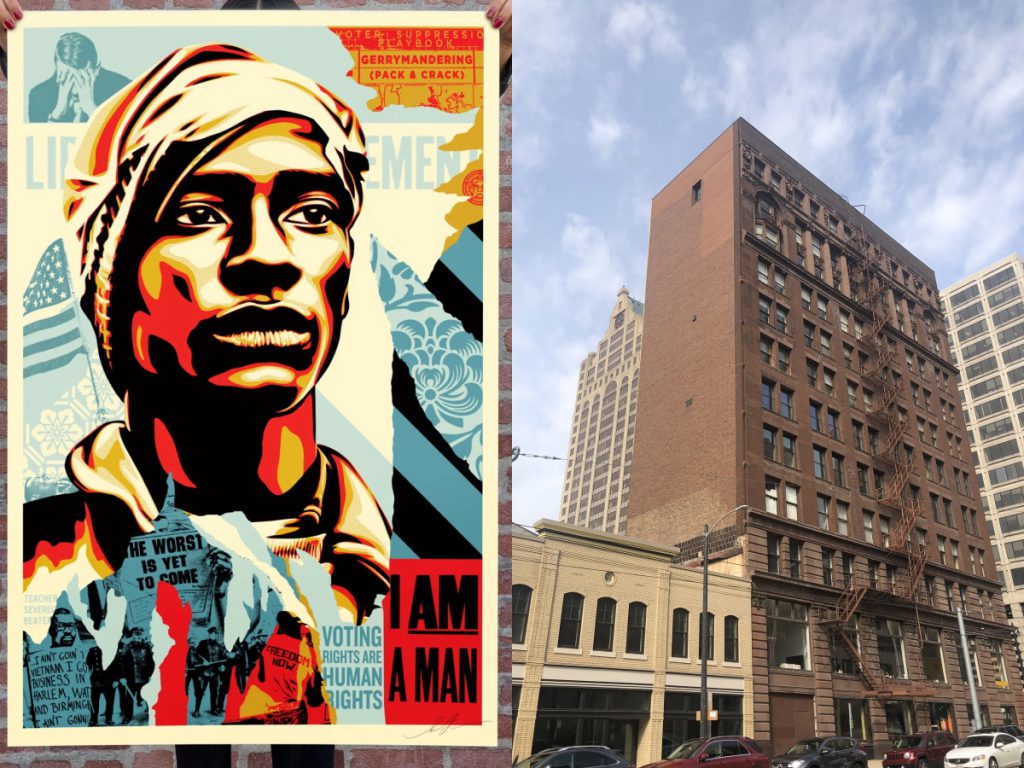 Internationally-acclaimed artist Shepard Fairey will paint a multi-story mural on the south side of the 12-story Railway Exchange Building, 229 E. Wisconsin Ave., in downtown Milwaukee.

The piece, entitled “Voting Rights are Human Rights,” will be completed in time for the Democratic National Convention in mid-August, but is intended to last for years after the convention.

The multi-story mural is centered on an image of a Black male with references to gerrymandering, voting rights, anti-war protests, and other images surrounding the figure. It was designed in partnership with photographer Steve Schapiro, who documented civil rights protests in the 1960s.

The project is being organized by Milwaukee artist Stacey Williams-Ng and her organization Wallpapered City in partnership with Fairey’s own Obey Giant organization. The lead sponsor on the project is the Milwaukee-based Black Box Fund.

The mural is based on a series of images created by Fairey. Another image in the series, “American Rage,” was recently installed on the side of an office building in Seattle.

“As I looked through his numerous beautiful and powerful photos, we discussed the possibility of collaborating on the spot,” wrote Fairey in describing the inspiration behind the piece and his first meeting with Schapiro.” Voting rights and racial equality were the focus of a mass movement toward a more just society in the ’60s. Unfortunately, insidious racism, which never went away, has given way to more overt racism, and voter suppression, often targeting people of color and students. Democracy needs to work for everyone.”

“Voting rights are human rights, and we need to make every effort to give equal voting access to everyone of voting age regardless of race or economic circumstance. It is essential that people vote!” wrote Fairey.

Fairey is likely best known for his Barack Obama “Hope” poster created for the 2008 presidential campaign. The building his new mural will adorn served as the Milwaukee office for Obama’s 2012 campaign.

Because of its proposed location within a city-designated historic district, the project requires approval by the Historic Preservation Commission.

“Although we have yet to announce this project in the press, the major city and state art leaders already know about it, and heartily support this historic artwork being added as an asset to the City of Milwaukee’s downtown landscape,” wrote Williams-Ng in a certificate of appropriateness application.

The project is receiving support from the Wisconsin Department of Tourism.

“Art and the creative economy build a sense of community and togetherness that our society so deeply needs right now,” said state tourism Secretary-designee Sara Meaney in a statement. “We in Wisconsin already know Milwaukee is a gem, but Shepard Fairey’s mural may very well transcend Milwaukee, putting us on the map right along with The Smithsonian, the Museum of Modern Art in New York and the National Portrait Gallery, prominent places that have already featured Mr. Fairey’s work.”

Fairey has painted over 100 murals and has pieces on six continents.

“Milwaukee is already blessed with a diversity of impressive murals created by local and internationally recognized artists. The addition of Shepard Fairey’s work to our skyline will place Milwaukee alongside Los Angeles, London and Paris in the list of cities embracing this important voice,” said Deborah Kern, Black Box Fund founder.

Signed prints of the piece the mural is based on will go on sale at noon Thursday, July 9th for $45 with proceeds benefiting the Equal Justice Initiative.

Urban Milwaukee is a tenant in the Colby Abbot Building owned by the Kahn family.