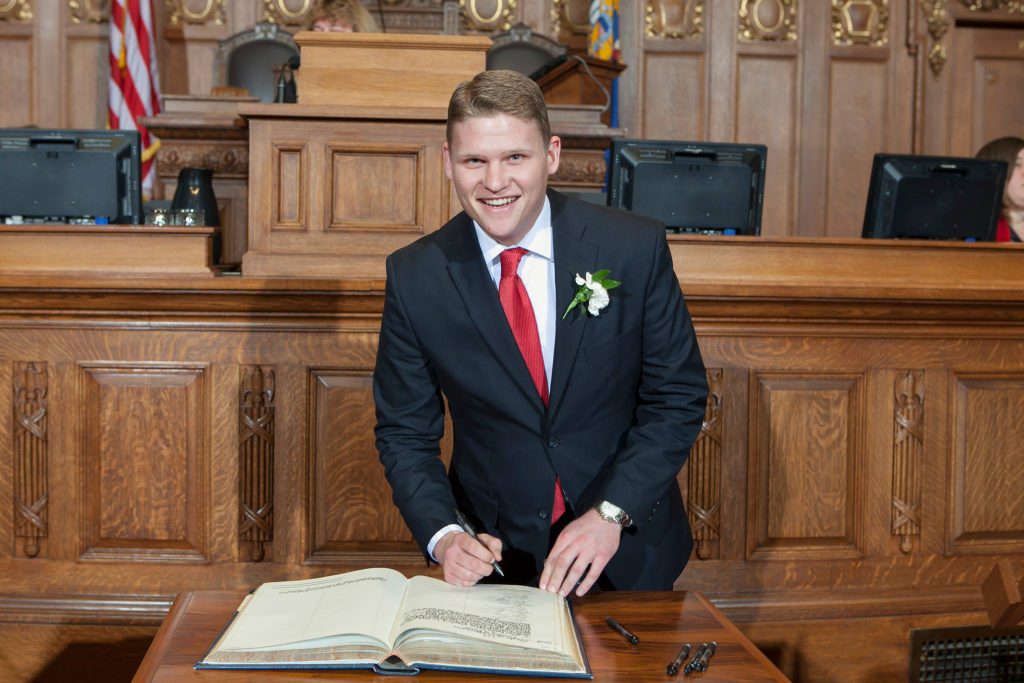 In the month of April, Republicans in the Wisconsin Legislature tirelessly argued against Gov. Tony Evers’ “Safer-at-Home” order.

Instead, they argued, the state needed a regional plan to control the virus and boost the economy. A regional plan would treat the largely white and not-yet-infected residents in Northern Wisconsin differently from the disproportionately Black and brown residents in places like Milwaukee that had higher numbers of COVID cases.

Republican legislators believed this so ardently they filed and won a lawsuit at the state Supreme Court — some even attended protests against Evers’ order.

For weeks, press releases, letters and Tweets said that Wisconsin needed local control over plans to protect residents from the virus. On April 17 (about a month before the Supreme Court struck down Evers’ statewide order), Rep. Cody Horlacher (R-Mukwonago) wrote a letter to the governor that specifically asked for stay-at-home orders to “vary county by county.”

Horlacher was joined by 17 other Republican legislators in signing that letter.

On May 13, the Supreme Court struck down Evers’ order. Counties across the state followed up with their own stay-at-home orders — effectively, though not officially, creating the localized, regional approach Republicans had been asking for.

More than a month has passed and many of those county orders have expired or been rescinded. But now, as the number of daily cases rises again across the country — and in some parts of Wisconsin — county boards across the state are attempting to pass ordinances codifying their powers to control a local outbreak of the disease.

These ordinances largely copy word for word the powers already given to them by state statute, which says “local health officers may do what is reasonable and necessary for the prevention and suppression of disease; may forbid public gatherings when deemed necessary to control outbreaks or epidemics and shall advise the department of measures taken.”

Counties are attempting to copy the statutory language into local code to make sure that local  health departments can enforce quarantine and potentially close businesses in the event of a local spike.

But the key word there is “attempting.”

Republican legislators, the right-leaning think tank the MacIver Institute and conservative media personalities including radio host Vicki McKenna, have been stirring up residents on social media against their county boards and the “overreach” by supposedly tyrannical bureaucrats in local health departments.

All of this despite their previous calls for local control.

The effort is working. Proposed ordinances have been sent back to committee or tabled in a number of counties.

“HEADS UP JEFFERSON CO,” McKenna said to her nearly 25,000 Facebook followers on June 16. “Now Jefferson Co wants the authority to enter your home and remove you (or your kids!) from it…”

At the MacIver Institute, an article written by Lexi Dittrich — the daughter of Rep. Barbara Dittrich (R-Oconomowoc) — suggests that the county ordinances are part of a broader conspiracy against the people of Wisconsin because they all reference the relevant state statutes.

“All proposals that MacIver has reviewed reference 252.03, some reference 252.06. Some proposals cite the powers that DHS Administrative Rule 145.06 gives to public health officials,” the article states. “The similarities raise the question, was there a coordinated effort to adopt a master ordinance with broad and sweeping powers all over the state?”

Horlacher, the representative who authored the letter calling for local control, has recently been fighting a war against local control on two fronts. His 33rd District covers parts of Jefferson and Walworth Counties — both of which have attempted to pass these local health ordinances.

“If you live in Walworth County be advised the board has this overreach on their agenda at 3:30pm today,” Horlacher wrote on Facebook June 9.

Also posting about local health ordinances were Reps. Rick Gundrum (R-Slinger) and Bob Kulp (R-Stratford). Both of them signed Horlacher’s letter in April that called for local control.

Gundrum is quoted in the MacIver Institute article. In a Facebook post about that article he wrote “I oppose county governments granting new powers to appointed bureaucrats.” But, again, these aren’t new powers.

Gundrum declined to answer any questions, saying in an email his previous statements against “local health officials unilaterally creating new ordinances” were enough.

“Policing powers are reserved to be drafted, discussed, and decided by the respective elected governing body not an unelected government official,” Gundrum said. “Attorney General [Josh] Kaul has cautioned local governments about creating penalties for individuals who violate a public health ordinance enacted by a local government.”

There are a few things to unpack here.

So, despite what Gundrum says, these ordinances have been drafted, discussed and decided by the “respective elected governing bodies.”

Second, Gundrum — and a number of others who have spoken out against these ordinances — is referencing police powers. These critics say no appointed bureaucrat should have more power than an elected official. But neither county board members nor state legislators are able to execute search warrants or discharge a firearm in the course of their daily work.

The comparison to law enforcement powers actually highlights how much power is regularly given to unelected officials. A municipal police chief isn’t elected, a police officer or sheriff’s deputy aren’t either. Maybe an appointed police commission has hiring powers, but still no election is being held.

In fact, the only local law enforcement official who is actually elected in Wisconsin is the county sheriff.

These arguments have been echoed online by a number of other representatives. John Macco (R-Ledgeview), Michael Schraa (R-Oshkosh) and Shae Sortwell (R-Two Rivers) all posted about the ordinances.

In some instances, local powers to prevent the spread of COVID-19 are desperately needed in the districts these officials represent. Schraa’s Winnebago County didn’t break 100 positive cases until after the statewide stay-at-home order was lifted. But in June, Winnebago’s positive case count jumped from 211 to 565.

“I’m asking anyone who is concerned or disturbed by the language to attend tomorrow’s meeting,” Schraa wrote on Facebook June 21. “Many of the County Board members are opposed to this horrible resolution, but there are a number of board members who would support this archaic and overburdening language. I’m asking you to show up for this meeting, speaking if you feel compelled, but to show up. I’m posting language that Walworth County tried to pass recently. I think you’ll agree, this can’t happen. #KeepThemAccountable”

Dittrich says she’s “the wrong arm of government” to talk about the local orders, so she’s been pointing her constituents to their county board members when they ask about this issue.

“It’s a county level issue that I as a legislator can’t really do anything about,” she says. “I have been encouraging constituents to get a hold of county boards to make their voices heard. People are upset about it, understandably.”

While she does think some of the measures counties are proposing — such as quarantine guards — are extreme, Dittrich says that the issue has been too politicized and that in many cases, people can be trusted to act in the interest of their own health.

“Literally authorizing people who are not law enforcement to stand outside your house and guard your house, this seems extreme to people,” Dittrich says. “We don’t give people enough credit for having a vested interest in their own well being. People don’t want to be treated like children … I don’t like how politically charged this has become, because it shouldn’t be.”

Horlacher, Kulp, Schraa and Sortwell did not respond to a request for comment. Macco said he was unavailable.

But the effort to fight local ordinances is not just coming from the legislative branch.

In Racine County, which at one point was one of the worst COVID-19 hotspots in the country, local officials have tried for months to establish mechanisms of control over the virus.

The city of Racine established and then rescinded a stay-at-home order after the statewide order was struck down in May. Earlier in June, the city attempted to institute an order restricting public gatherings.

A circuit court judge struck the order down.

“Instead of complying, Defendants cut and pasted the challenged language at issue in this case into a new ordinance that they are now enforcing. Strike One,” Fredrickson wrote in his order. “At this time, this Court is not going to ascribe motives to Defendant City of Racine in its enactment of the new ordinances. Going forward, this Court warns Defendants that it will not hesitate to issue an order to show cause for contempt if any one, or both, of Defendants attempt to undermine the orders of this Court. There are no strikes two, or three, in this Court.”

The injunction, much like the Supreme Court decision striking down the statewide order and Republican legislators stirring public sentiment against local health ordinances, leaves Racine without the tools to fight a pandemic that has killed more than 120,000 Americans — 61 of whom were residents of Racine County and  more than 700 of whom were Wisconsinites.

“This ruling is extremely troubling. Local governments have a clear and longstanding ability and authority to enact ordinances to protect the health and well-being of our residents,” Racine Mayor Cory Mason said in a statement. “That has never been more needed than now, in the midst of this pandemic. As Mayor, my duty and obligation is to protect the health of Racine’s residents and I will continue to seek ways to do that while this litigation works its way through the process. In the meantime, this judicial ruling leaves no protections in place for our community, putting all of us at increased risk.”

“We are on our own for now, without the public health protections that were helping to keep the virus from exacting an even worse toll on our communities,” he added.

“That’s one of the reasons why we believe a statewide approach was the best way to deal with this statewide pandemic,” Nilsestuen said. “And it’s one of the challenges that the Wisconsin Supreme Court, by not providing clarity in terms of the entirety of the law [created for] … local public health officers that are on the frontlines of fighting this disease and now they’re also on the front lines of fighting the legal battles on this.”

“It’s a difficult problem,” Nilsestuen added, “but we’re confident and will continue to support local public health officers to make the tough decisions they need to make in order to keep us healthy and safe.”

But even as county boards and health departments fight for the tools to control the virus, Wisconsin is seeing upticks in counties across the state — including in Dane, Jefferson, LaCrosse, Manitowoc and Walworth Counties.

Nor is this the only culture war battle health officials need to focus on. Milwaukee County recently issued a universal mask policy as mask-wearing becomes more and more politicized.

So, after emerging from the fight over local ordinances, health officials will need to prepare to convince the public to comply with one of the most effective virus-fighting tools.

On June 26, McKenna, posted the link to a Breitbart article with the headline “Joe Biden: I Will Force Americans to Wear Masks in Public.”