With laminated photos of Blacks killed by cops. Sheriff’s Office is investigating.

By Isiah Holmes, Wisconsin Examiner - Jun 24th, 2020 05:55 pm
Get a daily rundown of the top stories on Urban Milwaukee 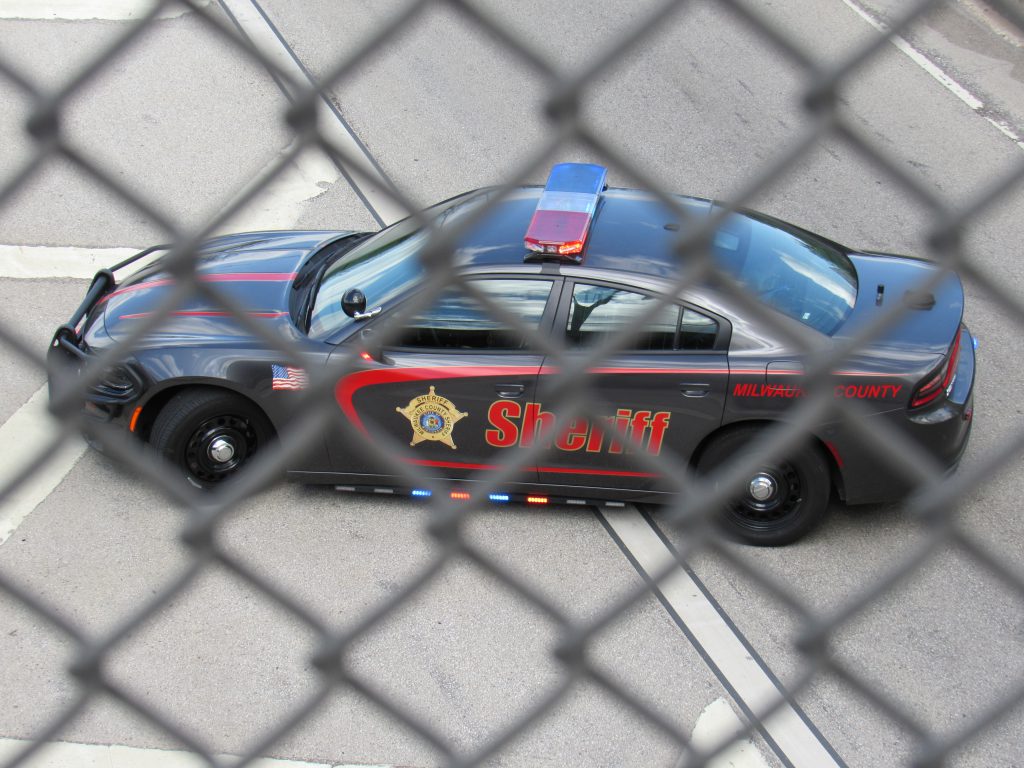 A Milwaukee County Sheriff vehicle parked below a bridge being crossed my protesters. Photo by Isiah Holmes/Wisconsin Examiner.

The Milwaukee County Sheriff’s Office (MCSO) is investigating a chilling incident in Milwaukee’s Riverside Park, on the city’s east side. Nooses were placed in a tree in the park, near laminated cards depicting the photos of Black men and women who’ve been killed by police or citizens in recent years.

In a press release, the MCSO noted that descriptions of each individual’s death was also on the cards. “This investigation is ongoing and has identified pertinent information,” reads the press release. “MCSO encourages any members of the public with information regarding this matter to contact Milwaukee County Dispatch at (414) 278-4788.” 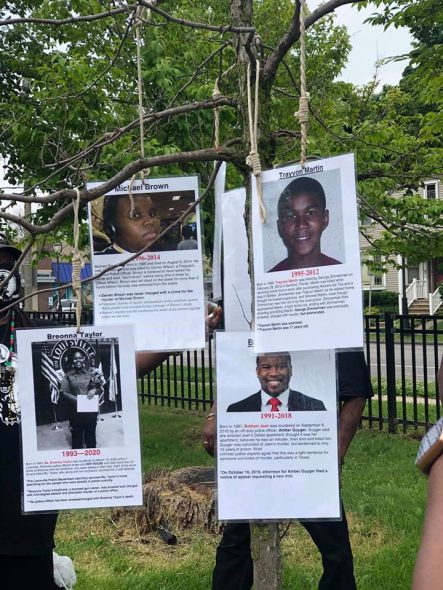 A picture of the nooses and images. Posted on Facebook by Darryl King Rick Farmer II and the Original Black Panthers of Milwaukee.

The photos, which MCSO became aware of on June 20, depicted Breonna Taylor, Eric Garner, Botham Jean, Ahmaud Arbery, Michael Brown, and Trayvon Martin. While Taylor, Garner, Jean, and Brown were all killed by police, Martin and Arbery were pursued and killed by ordinary citizens who claimed they felt they were behaving suspiciously or involved in crimes. Both Taylor, who was killed by Louisville Metro police and Jean, who was killed by an off-duty Dallas officer, were shot in their own homes. On Wednesday, the officer who killed Taylor was fired by the department more than three months after her death.

Garner and Brown’s cases sparked nationwide Black Lives Matter movements. Garner was killed after New York officers placed him in a choke hold, some of his final words being “I can’t breath.” Brown was shot by officers in Ferguson Missouri in 2014 with his hands up. His death ignited protests and civil unrest in the city, as well as the chant, “hands up, don’t shoot!”

Some of these cases saw the shooters face charges and prison time, while others were cleared. Amber Guyger, the off-duty Dallas PD officer who shot Jean, was sentenced to 10 years in prison for the killing. Guyger claimed that she thought she was actually entering her own apartment when she saw and shot Jean in his own home.

Former police officer Gregory McMichael and his son Travis McMichael killed Arbery with a shotgun, but weren’t arrested for months until a video and media attention made it impossible to ignore the case. George Zimmerman, the 36-year-old man who pursued and shot 17-year-old Trayvon Martin in 2012 as he walked home from a store, was acquitted of all charges. Zimmerman then sued the Martin family and others involved in the trial in December 2019 for $100 million. In Garner’s case, it was recently revealed that 17 complaints had been filed against the officer who killed him.

MCSO continues to investigate the hanging of the nooses and pictures in Riverside Park. “MCSO encourages any members of the public with information regarding this matter to contact Milwaukee County Dispatch at (414) 278-4788.”