Can Palzewicz Win Race for Congress? 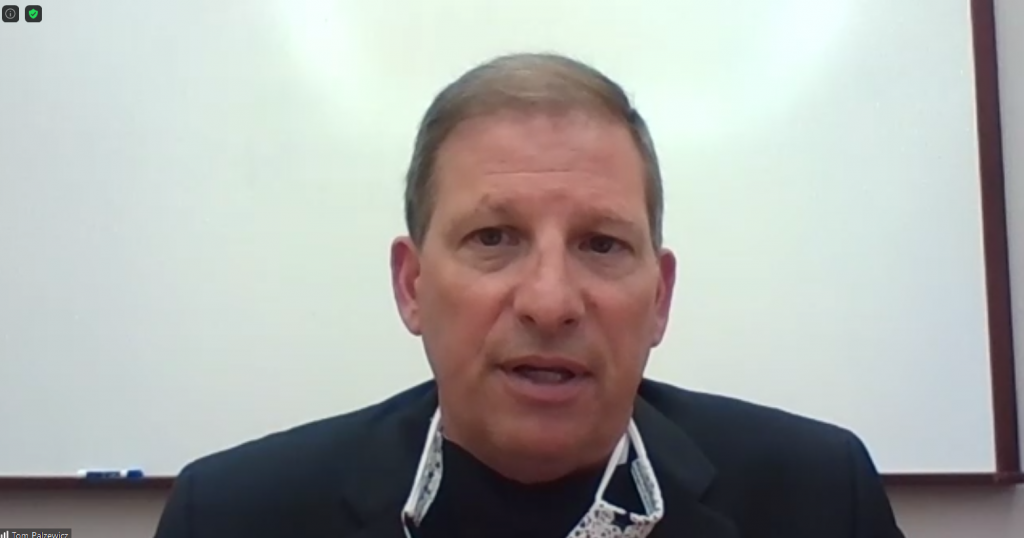 Sidelined after the COVID-19 pandemic put a halt to in-person gatherings, Democrat Tom Palzewicz relaunched his campaign for Wisconsin’s 5th Congressional District Tuesday with a low-key kickoff at his Brookfield campaign headquarters — supplemented with an online connection via Zoom.

The announcement from the business consultant and former banker reiterated the messages he offered when he first formally entered the race last October, focusing on health care, economic inequality, climate change and gun violence.

He said Tuesday his campaign is “about all of us working together for affordable and accessible health care, economic parity, solving racial injustice, climate and environmental sustainability and bringing an end to gun violence.”

In an interview after the kickoff, Palzewicz said the pandemic has accentuated the importance of universal healthcare. Continuing protests across the state and the nation focusing on police brutality and systemic racism have brought racial justice issues to the foreground as well, he added.

“It’s very hard to do anything about individual racism,” Palzewicz told the Wisconsin Examiner. “But we have a tremendous opportunity, especially right now in our society, to really look at where are the structures and the systemic [effects] of racism? Where are they built into our society?”

Palzewicz ran against incumbent Republican Congressman James Sensenbrenner in 2018 and lost handily, but improved on previous Democrats’ numbers against the veteran lawmaker. Sensenbrenner announced last year he would retire at the end of his current term after 42 years in Congress.

While that produced an open-seat contest, political oddsmakers score the district as solidly Republican. State Senate Majority Leader Scott Fitzgerald (R-Juneau) is the leading favorite for the GOP side of the ticket, although he faces a primary challenge in August.

Earlier this year, Palzewicz said, his run had been building momentum with gatherings to introduce himself to voters and raise money, until those were shut down by the pandemic. Tuesday’s relaunch will mark the beginning of a more digitally focused campaign, with town halls and fundraisers conducted online.

Assuming Fitzgerald clears the primary hurdle, Palzewicz said he will focus on his opponent’s Senate record: blocking popular legislation authored by Democrats, “gaveling in and gaveling out” of recent special sessions that Gov. Tony Evers has called — most notably on gun violence — and holding just a handful of floor sessions in 2020, adjourning the state Senate’s regular calendar before April with bills, including many that had been passed by the Assembly, left unaddressed to die.

“As a taxpayer, I’m very frustrated by the fact that he basically worked a couple months this year and now he gets to spend the entire year still drawing a salary and running for the next level of where he wants to go,” Palzewicz said.

The Democratic challenger believes both the issues he has embraced, and his criticism of his likely November opponent, will resonate beyond Democrats in the district — who, he says, have become more willing to go public since President Donald Trump took office in 2017. He is counting not just on drawing independent voters, but Republicans who have been leaning away from the party in frustration with its current direction under Trump and Trump’s supporters, including Fitzgerald.

“I’m hoping there’s enough people that believe in accountability and that believe we should hold our politicians accountable,” Palzewicz said.