Unanimous vote of the school board ends funding for school resource officers.

By Madeline Fox, Wisconsin Public Radio - Jun 19th, 2020 05:03 am
Get a daily rundown of the top stories on Urban Milwaukee 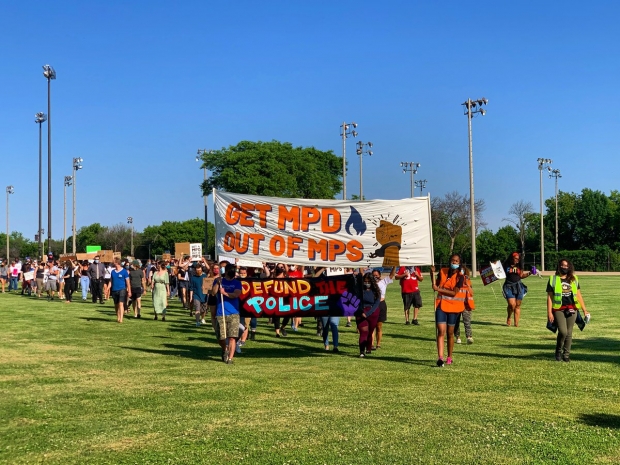 The Milwaukee Board of School Directors voted unanimously to terminate its contract with the Milwaukee Police Department Thursday evening.

More than two dozen members of the public called in to express their support for the resolution, and board members received nearly 800 written messages about the planned vote.

“We have enough research to know that a majority of our students, our students of color, are not treated with respect by the system,” said board member Paula Phillips, who co-introduced the resolution. “While we can try to make this work, it hasn’t been working.”

Director Sequanna Taylor, the other board member who drafted the resolution, agreed.

“If we’re going to address and have our students ready for success, then we need to have them in an environment that is successful,” she said. “I’ve heard from many students that having police inside the schools, working within the schools does not create a positive effect.”

The unanimous resolution followed a yearslong push by student and teacher groups, and came amid more recent moves by school districts across the country to sever relationships with police departments as protests continue over the deaths of George Floyd and others.

“All the hype that’s built up to this — it’s our time now, it’s our time to get them up and out of here,” said Kris English, a high school sophomore and fellow at the student-led group Leaders Igniting Transformation. “The world is seeing why we don’t need police in our schools.”

Leaders Igniting Transformation, or LIT, has been pushing to divest Milwaukee Public Schools (MPS) from the police department and invest that money elsewhere since the group formed two and a half years ago. They’re asking for the money to be reallocated into hiring more social workers, counselors and other support staff, as well as training teachers and other school officials in restorative justice, among other priorities.

The Milwaukee Police Department (MPD) released a statement before the vote saying it “fully supports” MPS if it decides to remove school resource officers from its schools.

“We agree with the many voices from our community who believe that the funding should be reinvested into our public school system to support social services,” the police department said in an email. “Regardless of the vote, MPD will continue to support MPS and MPS students.”

“That was a really rough school board for us,” she said. “To see where we’ve come in a year is really impressive, really inspiring, but it’s also sad at the same time that it took the death of George Floyd, Breonna Taylor, and now Rayshard Brooks to kind of put us in this position where folks are like ‘Oh, wait, maybe we really do need to look at this a little differently’ — so, you know, it’s bittersweet.”

She said the COVID-19 pandemic and the “pandemic of racism” that’s been brought to wider attention by recent protests are only adding to the need for more comprehensive counseling and mental health services for MPS students, which she said was already urgent.

With MPS facing what’s likely to be a particularly challenging budget year due to unanticipated expenses and hits to state and local funding amid the pandemic, she’s worried district leaders might use the budget allocation that went to the Milwaukee Police Department as an opportunity for cuts.

“This is an opportunity for them to utilize this funding to really show that they want to invest in the futures of their Black and brown students,” she said. “The specific ask for this money was to divest from policing and invest in students, and so anything other than investing in students is not what the community’s asking for.”

Board members Taylor and Phillips co-authored the resolution last week, and board president Larry Miller sent out a statement backing it. The board called a special meeting for Thursday night to discuss terminating its contract with MPD and halting negotiations on purchasing metal detectors, facial recognition software and other security equipment.

Though the board can terminate the district’s contract with MPD for school resource officers, the board doesn’t have the authority to remove the four MPS officers who are assigned as part of their Truancy Abatement and Burglary Suppression (TABS) program, a collaboration between MPD, MPS and the Boys and Girls Clubs of Greater Milwaukee that’s supported by state funds and state statute. The resolution does, however, call for the board to lobby the Wisconsin Legislature to repeal the state statute that sets aside funding for the TABS officers, and an amendment added on during the meeting has the board holding off the execution of its TABS contract, and the money that includes, until it can receive legal direction from the city on its options to spend that money on something other than law enforcement.

Director Megan O’Halloran called the resolution “long overdue,” a sentiment echoed by many of the other board members. She brought up the death of an MPS student, Alvin Cole, earlier this year at the hands of police as an incident that should have driven the board to act sooner.

English, the sophomore LIT fellow, said his high school has between four and six police officers on site on a given day, and “a bunch of metal detectors.” He’d like to see those gone, and have staff members trained to deescalate situations safely — and he wants more money allocated to counselors, since he said there are only three total, split between the four grades.

“My hopes for MPS is definitely to just be able to come to school and not get harassed or bullied by a police officer, not getting treated out of pocket by some of our teachers, being able to talk to my counselors about the next step, which is college, and going to a good one,” English said. “Seeing MPS change its prison-like mentality and go back to being like a school, a regular school — that’s pretty much what I want from MPS.”