"Everyone's coming together" at protests in Wausau, Sturgeon Bay and across the state.

By Rob Mentzer, Wisconsin Public Radio - Jun 8th, 2020 12:16 pm
Get a daily rundown of the top stories on Urban Milwaukee 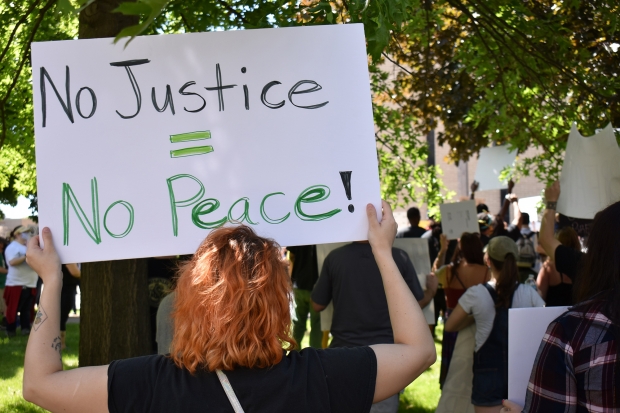 Protesters gathered in Wausau on Saturday, June 6, 2020 to raise awareness for Black Lives Matter and the killing of Minneapolis man George Floyd while in police custody. Rob Mentzer/WPR

The George Floyd March in Wausau on Saturday was the city’s third protest in a week. Some 1,500 protesters marched on downtown city streets, chanting for an end to police brutality. Outside City Hall, they knelt silently for 8 minutes, 46 seconds to commemorate the death of George Floyd, allegedly killed by a Minneapolis police officer who put his knee on Floyd’s neck for that long.
The protest, held in the city of 40,000 people, wasn’t so different from those held across the country since Floyd’s death. But it was the biggest organized political demonstration in Wausau in decades. 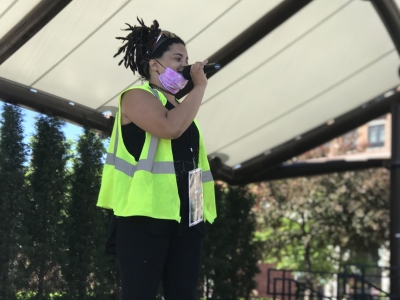 Carmyn Hoen speaks to protesters ahead of the George Floyd March in Wausau on Saturday, June 6, 2020. Rob Mentzer/WPR

Its size is one measure of how broad and far-reaching the protest movement against police brutality and racial injustice has become — reaching Wisconsin’s small cities and rural areas, and often attracted hundreds or even thousands of participants there.

“It’s thrilling,” said Carmyn Hoen, one of the organizers of the Wausau event. “This has been everywhere. You see it even in small towns that you wouldn’t think would have protests. … Everyone’s coming together.”

The protests are calls for racial justice, and for some people of color in rural areas, they’re also a way to assert their right to belong in those places.
“Being part of a minority community, you don’t always feel the numbers in small communities,” said Gwen Taylor, another organizer of the march. “It’s just as important if not even more important for the small communities to come out together, for people to come out of the woodwork and see that our community is diverse, and we have strength in that diversity.”

Wausau’s event was among the largest Wisconsin has seen outside of Madison and Milwaukee. But other events have dotted Wisconsin’s rural landscape. In Door County, hundreds lined the streets of Sturgeon Bay on Thursday, carrying signs and chanting. In Shawano, a group of 300 people marched down Main Street on Wednesday. The list goes on: Protesters outside the courthouse in Merrill — population 9,000 — held signs saying, “End police brutality” and “His name was George Floyd.” There have been demonstrations in Marinette, Marshfield, Stevens Point, Menomonie and many others.

“Regardless of how small we are, we are always going to support and advocate for people of color and (against) injustices anywhere,” said Felysity Niles, 19, whose sign at the Wausau rally said, “Hmong Americans for Black Lives.” About 12 percent of Wausau’s population is Hmong, and it’s the largest minority group. 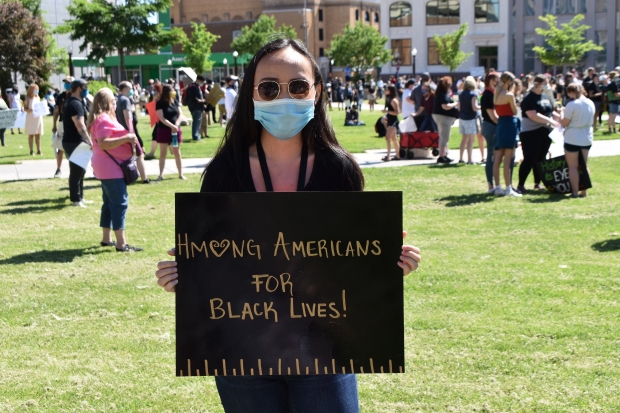 “Sometimes, smaller communities get a bad rap, that we are more inclined to be discriminatory,” said Kayley McColley, 20, also an organizer of the Wausau march. “Here we can see there are black people, there are Hmong people, there are people of other ethnicities and backgrounds who are here and who need our support.”

On Saturday, Ellen Lafans drove about a half an hour south from her home in Cable to a demonstration in Hayward, where she met other protesters from Sawyer and Bayfield counties at the intersection they’ve come to call “Democracy Corner.”

Lafans, who is white, is a retired nurse. She and her husband moved to northern Wisconsin three years ago from the Twin Cities, where decades ago she had an apartment near the site where Floyd was killed. She said she imagined that she was moving to the woods to get away from it all. Instead, she has become steadily more politically engaged.

About 60 people participated in the demonstration in Hayward, which has a population of 2,300. Lafans said she feels a connection to the much larger protests.

“There’s many of us all over who feel like we need to link our arms together and do something,” she said.

In central Wisconsin, Caitlin Schulz attended her first-ever demonstration in Wausau at the end of May. Schulz has gone to three more since then: in Marshfield (where she lives), in Stevens Point and in Wausau again.

Schulz, 31, works part-time in retail, but she lost a full-time job as an event planner due to the COVID-19 pandemic. She is candid about the fact that her life circumstances now give her time and the ability to participate in protests that she didn’t have before. She said she’s also been moved by the experience of getting involved.

“I tear up and I might cry a little bit, and I get goosebumps when people are honking” to show their support for protesters, she said. “You feel like you’re doing something important.”

A sense of connection to a nationwide movement is part of what protesters in rural areas say they get out of it. But that isn’t to say they aren’t seeking to address concrete issues in their own communities. McColley and Hoen both said they have been deeply saddened and outraged by Floyd’s death. Both have faced discrimination in their own lives and in their own community, and have made calls for change.

“Right now, we’re sad,” Hoen said. “We want to use that sadness and that scared feeling to make our community a better place.” 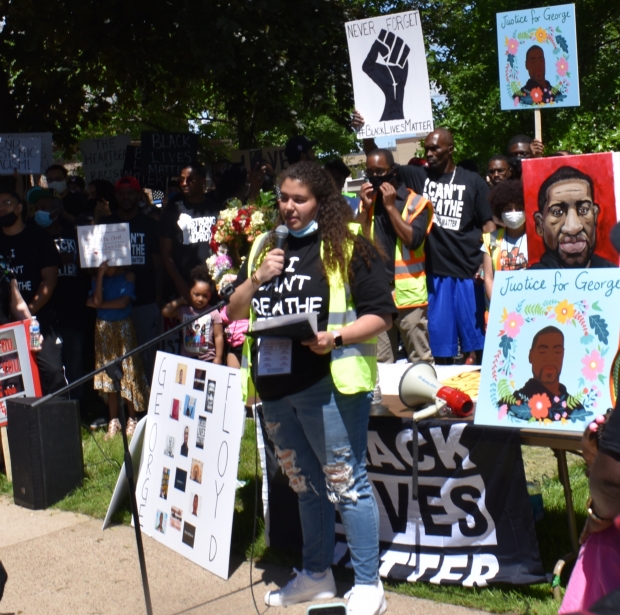 Kayley McColley, 20, addresses protesters at the George Floyd March in Wausau, June 6, 2020. McColley said she was “shocked in the best of ways” at the turnout of some 1,500 people to the Wausau event. Rob Mentzer/WPR

‘All 50 States Are Protesting’

At a protest in Superior on Thursday, Clivia Prince, 21, said she worries about her safety and the safety of her younger brother as people of color in the mostly white city. But community support for the protests has helped her, she said. She feels like “they do care that we’re people.”

“All 50 states are protesting,” Prince said. “They want justice for our people. … It makes me happy. It’s not just black people supporting Black Lives Matter.” 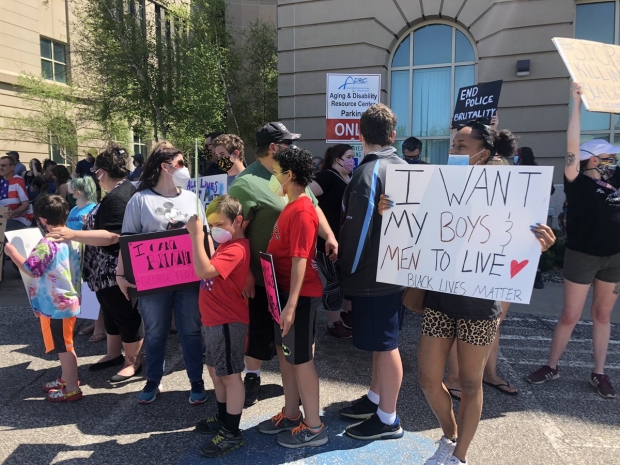 Clivia Prince, 21, of Superior holds a sign that reads: “I want my boys and men to live. Black Lives Matter,” at a protest at the City of Superior Government Center on June 4, 2020. Prince said she has a younger brother and doesn’t want to worry about his safety walking down the street as a black man. Danielle Kaeding/WPR

Ephraim Nikoi is a member of Superior’s police and fire commission. At the city’s protest, the Ghana-born communications professor said he hopes small cities will be a model.

“A city like Superior can show the nation how to bring people together,” Nikoi said. “We see how peaceful it is. We see how engaged the people are. … This is an example we could share with other communities around the country.”

Indeed, small cities haven’t generally seen the vandalism or violent clashes between police and protesters that marked at least the early days of protests in large cities.

In Wausau, organizers worked with local police to organize the march, which closed downtown streets on Saturday morning and into early afternoon. Police provided water for protesters, and several knelt during the silent observance. 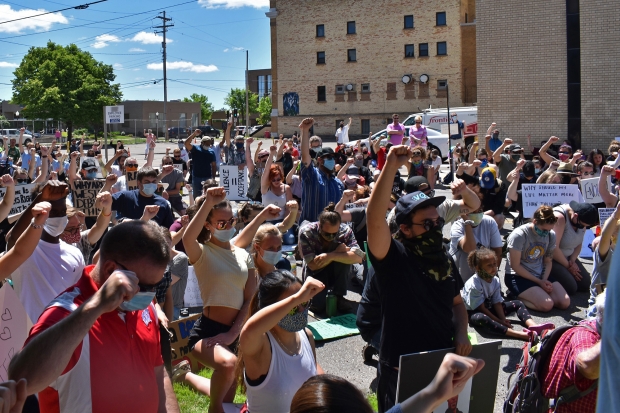 Organizers called the event a beginning of a movement that is still growing. And like many, they also expressed surprise at just how widespread the protest movement has become in not even two weeks.

“Although I am saddened by the reason that we have all been moved to congregate here this morning,” McColley told the crowd on Saturday before the march, “I think I speak for all the organizers when I say that we feel uplifted, we feel empowered, and we are shocked in the best of ways to see the number of people here with us today.”