Evers calls for long-delayed bill on deadly use of force by police to be taken up by Legislature.

By Melanie Conklin, Wisconsin Examiner - Jun 3rd, 2020 02:26 pm
Get a daily rundown of the top stories on Urban Milwaukee 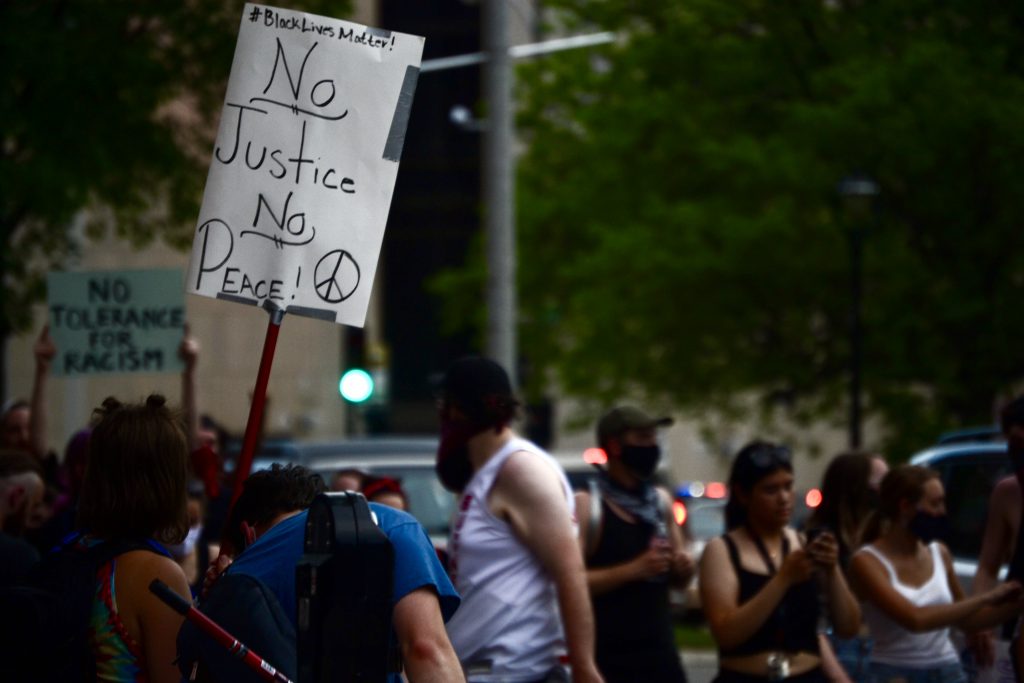 “No Justice, No Peace,” reads the sign. Photo by Maddy Day.

Gov. Tony Evers issued a video call-to-action on Tuesday as protests continued in municipalities throughout Wisconsin.

Evers began his message with a request that the Legislature take up a bill that has been introduced for several sessions by Democrats, but has never been permitted to move forward by Republicans who control both legislative houses.

“There was no empathy or humanity in George Floyd’s death, but there must be empathy and humanity in our response to it,” Evers said. “We must offer our compassion, we must offer our support, but most of all, we must offer our action. … We can start with accountability for unacceptable use of force by certain law enforcement officers in our country and our state. I am calling on the Legislature to immediately pass Assembly Bill 1012 that would reform use of force policies and send it to my desk for signature.”

It would not be a good use of money to bet on the bill’s  passage — or even the Legislature meeting to take up any bills, including more pandemic relief which has also been called for — but this past week has seen unprecedented advocacy and protests from coast to coast in the United States.

Just as the exceptional circumstances of the pandemic moved previously Democratic-only supported measures — like eliminating the one-week waiting period for unemployment benefits that was lifted temporarily on a bipartisan vote — perhaps Evers hopes the protests following Floyd’s killing might lead to bipartisan consideration of police reform, particularly around the use of deadly force.

The specific piece of legislation Evers endorsed was introduced again in March by a group of legislative Democrats led by state Sen. LaTonya Johnson and Rep. Chris Taylor (D-Madison) as the session was winding down.

At the time Republicans were pushing “Tougher on Crime” bills, many of which Democrats considered either racist or unfairly targeting only Milwaukee — or both —  as well as several bipartisan criminal justice reform bills. Republicans, who control both legislative chambers, refused to consider the bills tied to police reform.

Taylor and Johnson’s bill creating law enforcement policies on the use of force was referred to the Assembly committee on Criminal Justice and Public Safety, where it was never taken up.

For Johnson, whose district and neighborhood includes Sherman Park where protests and unrest broke out in August 2016 following the fatal police shooting of unarmed 23-year-old Sylville Smith, this week was too familiar.

“If you are questioning the events that are happening across the country and in our community, please know that for African Americans, seeing yet another Black life taken quite literally before our eyes invoke a trauma and pain that has been felt for decades—centuries,” Johnson wrote on her Facebook page on Saturday. “Our community is crying out for change, and that means changing the policies that allow this oppressive history to repeat itself.

Johnson said that the core of the reform package is the bill singled out by Evers, which requires all law enforcement agencies to have use-of-force policies that incorporate these principles that she — and Evers — laid out:

▪️ The primary duty of all law enforcement is to preserve the life of all individuals;

▪️ Deadly force is to be used only as the last resort;

▪️ Officers should use skills and tactics that minimize the likelihood that force will become necessary;

▪️ If officers must use physical force, it should be the least amount of force necessary to safely address the threat;

“We need support from communities and leaders across Wisconsin to fix what is broken, and we need them to join us in demanding the systemic changes necessary to put an end to this cycle of tragedy and violence,” Johnson added.

Rep. Taylor’s work on police issues was deeply motivated by the 2015 killing of Tony Robinson by a Madison police officer — an incident she heard unfold after stopping to fill her car with gas.

She posted on Facebook that night: “Earlier this evening, I pulled into a gas station on Williamson Street. Simultaneously, there was an incident across the street that resulted in an officer-involved shooting. It is an unspeakable tragedy. I’m heartbroken for everyone involved and for my community. I’ve been informed that the Department of Justice’s Division of Criminal Investigation is on its way to the scene.”

A statement she put out in the wake of that tragedy echoes eerily following the killing of George Floyd. Taylor advocated legislation around deadly force and de-escalation training. She wrote, ““I know that we can make progress together in ensuring these situations happen less frequently.  Adopting further reforms will save lives, which is the goal we all share. We must act now.”

Taylor has authored a number of measures tied to police reform — including one she co-authored with a Republican legislator that was signed into law by former Gov. Scott Walker in 2015 requiring investigators from an outside agency to investigate any officer-involved shooting. Wisconsin was the first state in the nation to pass such a law.

And in February a bill Taylor had worked on, again with a Republican co-sponsor — Sen. Patrick Testin (R-Stevens Point) —  to impose standards and rules around police body camera footage storage, usage and public access that was signed into law by Evers.

Taylor is stepping down as state representative, but Johnson and Rep. Evan Goyke (D-Milwaukee) introduced the package of law enforcement bills that she championed along with Rep. David Bowen (D-Milwaukee), so a number of legislators will likely remain after the fall election to continue the reform advocacy that Evers embraced on Tuesday.

Goyke has also emerged among the most vocal critics of the GOP’s “tougher on crime” philosophy, but told the Wisconsin Examiner in February that he believes a focus on data might be a starting point for Republicans and Democrats to come together, adding, “If we start from that base, and we agree on the facts, then I think reform looks like it has a much better chance of passing.”

Republican legislative leaders Sen. Scott Fitzgerald (R-Juneau) and Rep. Robin Vos (R-Burlington) did not respond to Evers’ message. The Republican pushback came from Senator Van Wanggaard (R-Racine) chairs the Senate Committee on Judiciary and Public Safety and was a police officer in Racine for 30 years before an injury led to his retirement.

In a release he stated that the bill Evers pushed was “clearly written by liberal activists who have never served with law enforcement, and apparently never even talked or listened to them. Micromanaging the force continuum in a state statute written by the most liberal Democrats in the Capitol won’t make things better and will likely make it worse.”

But he added, albeit in a rather insulting invitation, that he would work with Evers if the governor came to him:

“Governor Evers knows I have been working with law enforcement, activists and legal experts on a new way to investigate and prevent deaths in police custody. In the coming weeks and months, I hope to have something that all of Wisconsin can support that will hopefully prevent these horrific events in the future.

“If Governor Evers wants to have a productive conversation about the use of force, and preventing these horrific acts, he knows my number. After two years, Governor Evers should know that dictating to the legislature is neither productive nor bipartisan. His tactics only serve to divide at a time we should be coming together.”

Evers also heard the message on a phone call with President Donald Trump on Monday when the president demanded that governors crack down and “dominate” protesters. While he did not reference that conversation, his call for systemic change to address racism had a notably different tone. Evers said he’s seen “hope in those who’ve joined this cause in support, who’ve lent a hand to a neighbor, who’ve showed up with broom and dustbins in hand to clean up our neighborhoods.”

He also stressed that the bill on reforming police use of force was “an important first step” but still, just a start.

“I know I don’t have all the answers — no one does. This is on all of us, together.

“We need systemic change to address the racism in our state and our country. We must be willing to face it, with clear eyes and open hearts, recognizing that folks who look like me have been part of creating, exacerbating, and benefiting from the systems that we must now turn to dismantle.