By Isiah Holmes, Wisconsin Examiner - Jun 2nd, 2020 09:33 am
Get a daily rundown of the top stories on Urban Milwaukee 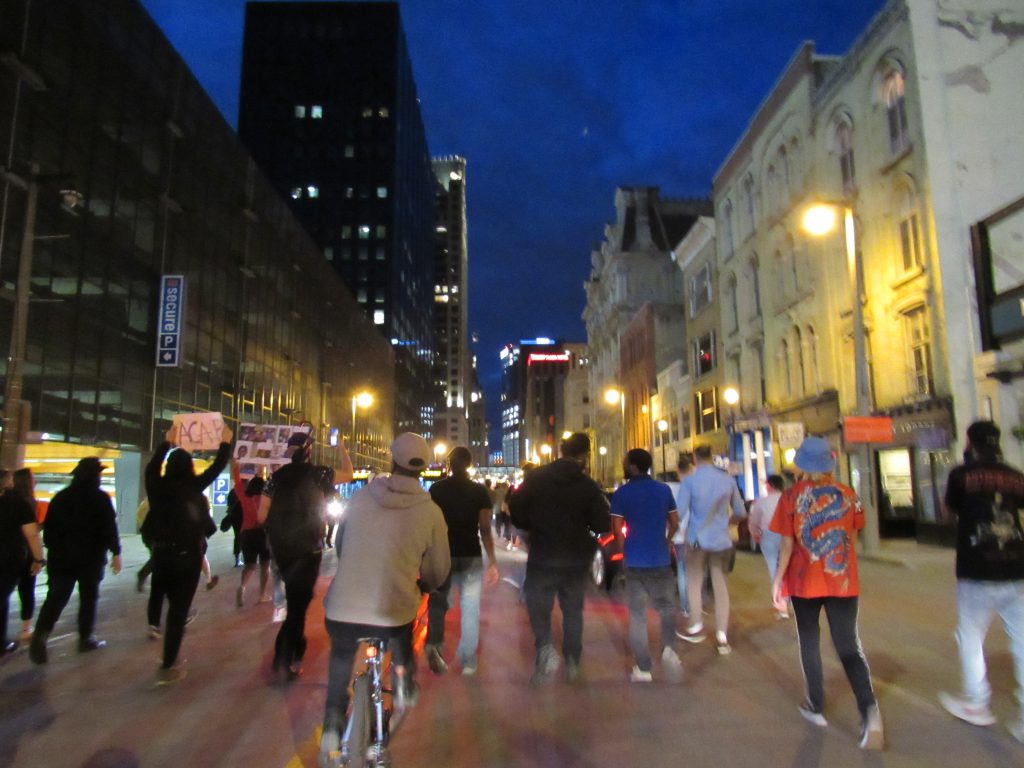 Protesters marching and gathering in Milwaukee during the first day of demonstrations. Photo by Isiah Holmes/Wisconsin Examiner.

Community leaders of Milwaukee have largely united in their support for the waves of protests which swept through the city and numerous others nationwide this weekend. The marches have drawn hundreds of people from across one of America’s most segregated cities for three consecutive days.

Over 100 residents who head community organizations issued a joint public letter affirming their approval of the demonstrations. “Heinous and ongoing violence committed against our fathers and mothers, sons and daughters in the form of inadequate access to decent education, healthcare, work and housing conflicts with our fundamental sense of humanity,” it reads. “This ethical contradiction cannot stand, and we will no longer endure it.”

Days before, the group launched “You Matter,” a campaign of affirmation for the value of all community members. “While this campaign was launched in response to the COVID-19 pandemic,” the letter reads, “it’s a message that transcends this virus.”

In truth, it’s the  theme embodied by masses of citizens who have spent days chanting “Black Lives Matter.” Although the death of George Floyd in Minneapolis catalyzed the nationwide demonstrations, each march had its own names to remember. For Milwaukee they were Dontre Hamilton, Joel Acevedo, Jay Anderson and others who’ve lost their lives during encounters with local law enforcement.

With curfews now in effect and militarized police on standby, Milwaukee officials and leaders are faced with sobering realities. “The heartbreak and the righteous anger of so many of us — in Milwaukee, Minneapolis and everywhere, is empowering,” Alderman Nik Kovac of Milwaukee’s Third District wrote on Facebook. “Those of [us] in government must use this energy to make the changes now that would have saved George Floyd’s life. It starts with a more effective, transparent and accountable system of discipline within the police department, so that signs of racism and sadism are immediately reported.”

Cavalier Johnson, president of Milwaukee’s Common Council, also made a strong statement. “The throat under that knee could have been mine,” Johnson said, “it could have been yours.” Calling the protests, “peaceful, heartbroken and righteous,” Johnson urged city leaders to “heed their call to action.” Milwaukee’s Common Council has drafted a list of proposed reforms which it will be submitting to the Milwaukee Police Department (MPD). They include:

The waves haven’t stopped there. “No one wants to see their village burning,” said County Supv. Sequanna Taylor in a statement. “But we understand the pain and frustration that has led to this moment because we live with that pain every day. We are passed tired of watching our Black brothers and sisters killed by police because of the color of their skin. We are passed tired of watching police who beat and lynch our Black brothers and sisters literally get away with murder when the whole world can see what happened.”

Rep. Evan Goyke (D-Milwaukee), via social media, also candidly addressed the woes being expressed by the protests. “As a white man with unending privilege,” he said, “I certainly don’t hold all the answers. I do believe change is possible, but it cannot be through sweeping pain, anger and grief under the rug or denying its rightful existence.”

Goyke hopes this new, invigorated movement will help America, and Wisconsin, re-imagine it’s criminal legal system. “From how we treat behavior in schools to how we support individuals returning home from prison,” he said, “our criminal system of laws and funding priorities are some of the most visible fault lines exposing the difference between black and white in America.” For Goyke, it’s imperative that, “this system, with its massive and growing budgets, must be dismantled and rebuilt.”

These sentiments have also been expressed within the halls of the Capitol. “We must recognize that, especially in our state, acts of systemic violence are happening every day, and they include more than just fatal police violence,” said Lt. Gov. Mandela Barnes, on the day of the first protests. “The poverty, poor environmental conditions and inequitable access to health care experienced by Black communities and other communities of color are a form of systemic violence, too.”

Although President Donald Trump has threatened a possible federal military intervention, the marchers are undeterred. Motivated by painful experiences and shared sentiments, they’re continuing to organize protests and legislative proposals for reform. “The idea that things should be better, not worse,” said Barnes, “is worth demonstration.”

One thought on “Many Milwaukee Leaders Support Protests”