Two politicos talk about getting more women in elected offices.

By Melanie Conklin, Wisconsin Examiner - May 31st, 2020 12:10 pm
Get a daily rundown of the top stories on Urban Milwaukee 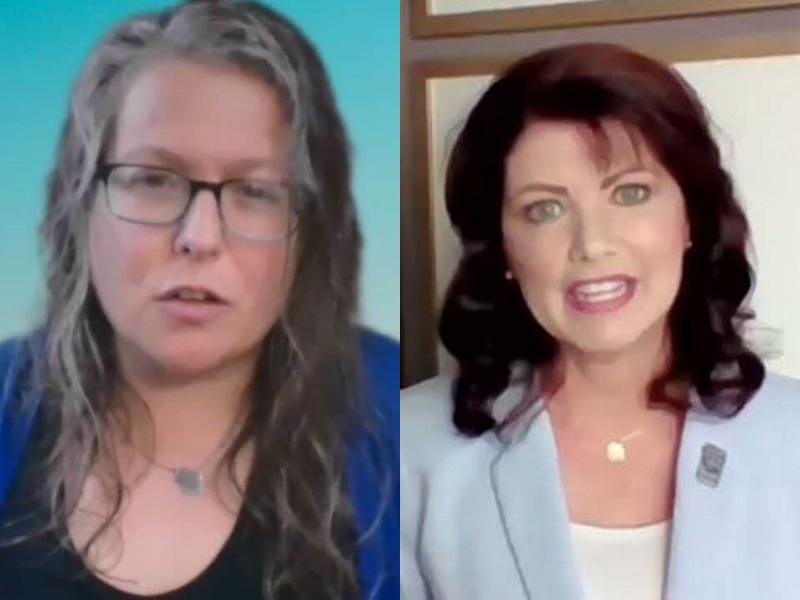 Former Republican Lt. Gov. Rebecca Kleefisch and Erin Forrest, executive director Emerge Wisconsin,  which trains and supports Democratic women looking to run for elected office, don’t have a lot of opinions in common when it comes to politics.

But they are both in the position of recruiting women candidates for the 2020 elections and they both are optimistic about women’s chances to win legislative seats when they look at the crew who will likely be on the ballot after the June 1 filing deadline hits next week.

Here’s another thing they agree on — Wisconsin has led the nation on women’s suffrage, but now has a dismal record on women in political leadership.

On Thursday, Wispolitics President Jeff Mayers moderated an online talk between two prominent women in Wisconsin politics as part of the WisPolitics lunch series that in non-pandemic times takes place in person.

Kleefisch wore a lapel pin with a jailhouse door on it, which she explained was in honor of women who protested to gain suffrage and were locked up. In 2019 she headed a “small federal office” planning the 100th anniversary celebration for women’s suffrage, which began in Wisconsin,the first state to ratify the 19th Amendment.

Mayers opened with this statistic from his spot in front of a fireplace: “In 1975, about 8% of the Wisconsin legislature was female membership. And today it’s 27%, but there really hasn’t been much in the way of gain since about 1983.”

“We are ranked 30th, I think, for state legislatures nationwide,” began Forrest. “But a thing people don’t think about a lot is that in the history of Wisconsin, we have elected three women to federal office ever — and that’s if you count Tammy Baldwin twice.”  (Baldwin has served in both the House of Representatives and the Senate). “Because Tammy Baldwin and Gwen Moore are the only women we’ve ever elected to federal office, and they’re both still serving.”

That creates a challenge inspiring women to run because the state is just now experiencing “the history” of women in those positions and the way to get more women into politics is to have successful examples they can emulate.

For Kleefisch, this brought to mind a personal example. Her husband is former Rep. Joel Kleefisch, who served in the state Assembly for 14 years. When he decided to step down in 2018, she helped recruit his successor.

“My first thought was a woman who ran a terrific special needs ministry from our church, Barbara Dittrich,” says Kleefisch. “But you know, there are barriers sometimes to convincing women to run for and serve in political office, and one of the things was the thing that Barb brought up very first: What about my family?”

The Kleefisches talked Dittrich through that. “We were able to work through those barriers and convince her that this would be a really great way to not only serve her family, but her community and her state and country. And sure enough, I’m now able to call my friend Barb my state representative.”

Wisconsin has never had a woman governor. Mayers noted that Wisconsin is one of 20 states that has never had one, and currently only nine states are headed by women.

When current State Treasurer Sarah Godlewski gave birth to her son last year, she had to write her own maternity leave policy because the state did not have one for constitutional officers, noted Forrest.

Kleefisch put a positive spin on it: “While it is unimaginable that the treasurer had to write her own maternity leave policy in the year 2019, I also think it’s an opportunity to be a trailblazer. And the more women that we have serving in political office, the more trails we blaze and the more opportunities we have to tamp down the grass for the girls and women who come behind us.”

Mayers stated that “I don’t think it’s any secret” that Kleefisch is planning to run for governor of Wisconsin in 2022 — she demurred with a “no comment.”

However she did drop this line: “I don’t know why Wisconsin has not yet elected a woman governor, but I think it will happen soon.”

Historically women’s political involvement started in the schools. Forrest surprised even Mayers — an expert in Wisconsin politics — with this  bit of history, saying that even before women were given the vote, they were permitted to vote in school board elections in Wisconsin, education being considered a woman’s realm. (She added that not all women got the vote even after the 19th  Amendment passed, because Native American women were not considered citizens and African American women were still stopped by racist Jim Crow laws.)

School boards in Wisconsin are where the state comes  the closest to gender parity with roughly 40% of the seats held by women, said Forrest. Mayers chimed in that the two candidates who have announced a run for Superintendent of the Department of Public Instruction are both women.

“Part of that is that schools and kids were a socially acceptable [place] for women to have a say … but also part of it is that’s the thing we’ve been doing the longest,” said Forrest.

Having no former women governors and few federal officials in Wisconsin is a barrier because people get used to women in those roles “a little bit at a time.” And it’s not confined to politics, she added, “There are more Fortune 500 CEOs named John than [there are] women. We have a problem with women being the boss.”

The gender divide of partisanship

A hostile partisan atmosphere has often been blamed for women not running for office. The hostility has also been blamed on the lack of women, who both speakers agreed are seen as — and often are trained to be — more collaborative.

There’s no question, says Forrest, that there are a lot more elected women who are Democrats than there are Republicans. On that front, the divide is getting worse.

“It did not used to be as pronounced as it is now,” Forrest said. “In fact, some of the data that talked about women being more collaborative and what women got done was in part because a lot of the a lot of the women who were in the Republican Party were more moderate. And a lot of those women are gone because of the Republican move to the right. Not all of them, obviously … but [Republican] numbers are decreasing in women’s representation and [Democratic] numbers are increasing.”

Forrest blamed another person for the disparity between Democratic and Republican women in office — President Donald Trump.

“Right now, women are voting for, and running as, Democrats in much, much higher numbers then as Republicans,” she said. “And from my perspective, it’s a matter of policy and it’s a matter of the standard bearer of their party being really gross and not respectful of women. And [his] policies don’t respect us and don’t treat us well.”

Kleefisch acknowledged Democrats have far more women in elected office, but batted aside the negative comment on Trump: “I don’t want to get into a proxy presidential debate on WisPolitics today. But I will say that Erin is correct in her statistics — anyone can read about them — there are more Democrat women serving today than Republican women, which is what I aim to change.”

WisPolitics promoted the discussion on women in Wisconsin politics as occurring around the time former Vice President Joe Biden — the presumptive Democratic nominee — is closing in on his choice of running mate, which he has said will be a woman. Kleefisch dissed that as ‘identity politics’ that focused on someone’s ‘packaging.’”

“I think among my peers in the Republican Party, most women believe that a candidate should be the best person for the job, the most talented, the most qualified,” she replied. “And they usually set identity politics aside, and may even be a little insulted by the idea that he is choosing someone specifically for their packaging. Now, what I mean by that is that he’s basically signaling to America that he’s choosing the best of the Democrat women, not just the best of the Democrats to be vice president of the United States.”

Mayers began to move on and Forrest jumped in with a challenge: “So the whole notion of identity politics is sort of frustrating to me, because it’s not about packaging, it’s about perspective. And it’s about the way we walk through the world and experience things differently because of our identities, because of the color of our skin, because of who we love, because we’re women. Policies impact us differently. And our perspectives are different. And that’s the point.” She noted that when Sarah Palin was on the Republican ticket for vice president, she and Democratic women she knew did not go and vote for John McCain just because of his running mate.

In reply Kleefisch suggested, “Erin, maybe you can coach your presidential candidate to say that because I think that’s a much better way of putting it than what we’ve seen in the media.”

Forrest offered one other factor she said was diminishing the number of women in office — gerrymandering.

“One of the problems that we have for women’s representation in Wisconsin right now is gerrymandering,” she said. “Right now, when maps are rigged against Democrats, they’re rigged against women and people of color and LGBTQ people who are running for office because predominantly, we’re running as Democrats. And so that’s a problem.”

Kleefisch dodged that topic — instead expressing her optimism for changing the dramatic lack of parity: “I’m incredibly optimistic, Jeff. I think the future is ours. I think fulfilling our state’s motto ‘Forward’ is going to be something that women will continue to do in the Republican Party, not just in 2020 but well into the future.”

Forrest said the 2020 spring elections made her optimistic as they were good for women — not just Supreme Court Justice-elect Jill Karofsky, whom she did not mention by name — but in local offices around the state, who are now “ leading their communities through incredibly challenging times.”