By Wisconsin Democracy Campaign - May 26th, 2020 10:36 am
Get a daily rundown of the top stories on Urban Milwaukee 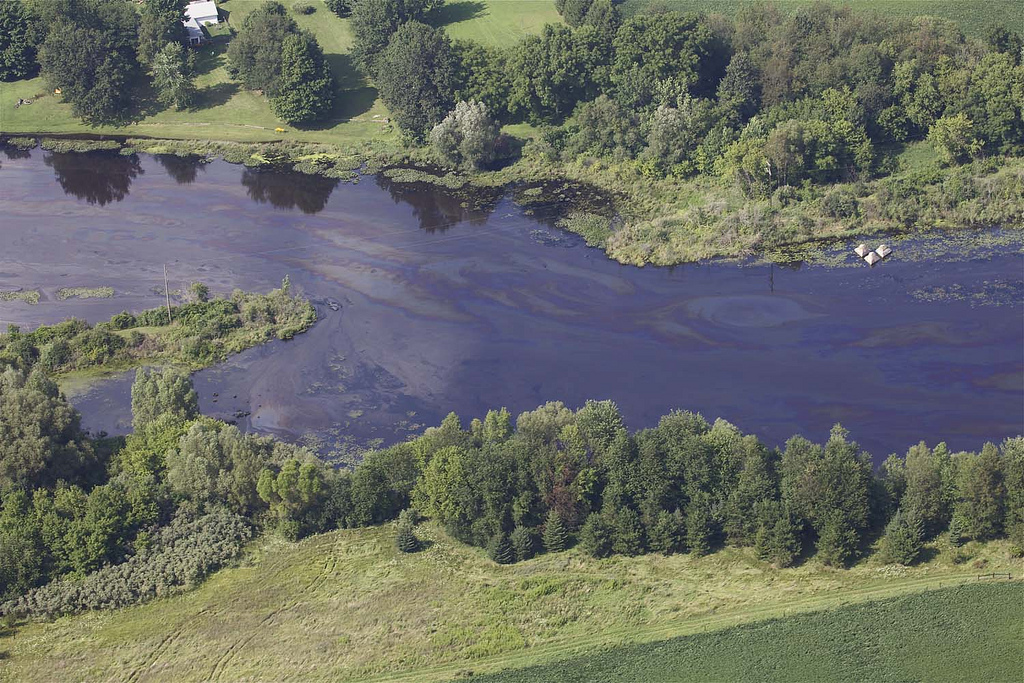 Three days after an Enbridge pipeline burst, oil is visible in the Kalamazoo River on July 28, 2010. Photo: Michigan Department of Natural Resources, via Flickr

A Canadian company that has paid more than a billion dollars for environmental law violations and oil spill cleanups is trying to seize private property in northern Wisconsin to reroute one of its crude oil pipelines.

Enbridge Energy has asked the state Public Service Commission (PSC) to give it eminent domain authority to take private land in Iron and Ashland counties, according to a report by The Wisconsin State Journal’s Chris Hubbuch. The company wants to remove a 12-mile portion of its Line 5 pipeline from the Bad River Reservation and bypass the reservation with 41 miles of new pipeline after a lawsuit filed by the tribe.

Enbridge says the line transports an average 540,000 barrels a day between Superior and southwestern Ontario that is eventually used to supply propane to dealers in Wisconsin and Michigan.

Midwest Environmental Advocates, a Madison environmental law firm, filed a petition on Thursday on behalf of five organizations with the PSC seeking a contested hearing on the matter. A group of more than 20 landowners and a property rights group filed similar requests, claiming the U.S. Constitution prohibits taking private land except for public use.

Enbridge was responsible for more than 800 oil spills between 1999 and 2010, according to a report by the Polaris Institute. Among those spills was a 2010 pipe burst in Michigan that spewed more than 840,000 gallons of tar sands crude. The event, which was the largest inland oil spill in U.S. history, polluted 35 miles of the Kalamazoo River, required residential evacuations, and took four years and $1.2 billion to clean up.

Enbridge Energy executives contributed $1,750 between January 2009 and December 2019 to state policymakers – all Republicans. The recipients were:

In 2015 the GOP-controlled Legislature and Walker approved giving Enbridge and other out-of-state oil pipeline businesses the authority to condemn real estate and personal property for state-approved projects.