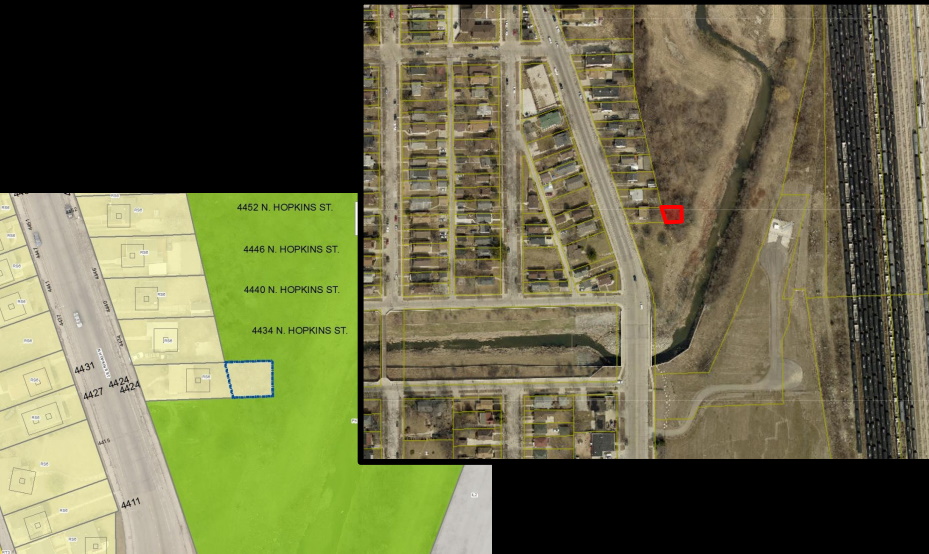 Call it a very small piece of a much bigger puzzle.

The Common Council is poised to rezone the rear portion of a property at 4424 N. Hopkins St. as parkland, allowing it to be merged with a much larger parcel owned by the Milwaukee Metropolitan Sewerage District. The front portion of the irregularly deep lot is occupied by a single-family home.

“It would allow for potentially a trail along this portion of Lincoln Creek,” said Department of City Development planning manager Vanessa Koster when the proposal was before the City Plan Commission.

“Having this piece of property will allow the trail to be constructed out of the flood plain zone,” she said Tuesday when the proposal was before the council’s Zoning, Neighborhoods & Development Committee.

“There is a lot of support from MMSD, DCD and [the Department of Public Works to move this trail forward,” said DCD senior planner Amy Oeth. “We are actively talking and meeting on it.”

The city owns the property, having acquired it via property tax foreclosure in 2018. The house on the lot is currently boarded up.

Lincoln Creek snakes through the north side of the city, following W. Congress St. before turning north at N. 35th St. and running behind the city-owned property and a number of other single-family homes before bending back east towards Lincoln Park and the Milwaukee River at W. Hampton Ave.

The portion behind the house is on the west side of the 30th Street Corridor which MMSD and others have been studying as a potential greenway corridor to mitigate flooding and provide space for recreation. The area was identified as a space for a north-south bicycle connection. The Century City business park is located a half-mile south.

“It would be great to actually have the trail there,” said Commissioner Catrina Crane when the plan commission reviewed the proposal. She said she lives nearby and has seen a number of kids playing in the area.

It’s not the only trail under consideration in the area. The city is also studying extending the Beerline Trail further northwest towards the east side of the 30th Street Corridor.

The council is expected to review the Connecting the Corridor Strategic Action Plan in the coming months. A file to adopt it was introduced in late March.

The Zoning, Neighborhoods & Development Committee unanimously endorsed the zoning change. It will go before the full council next week.