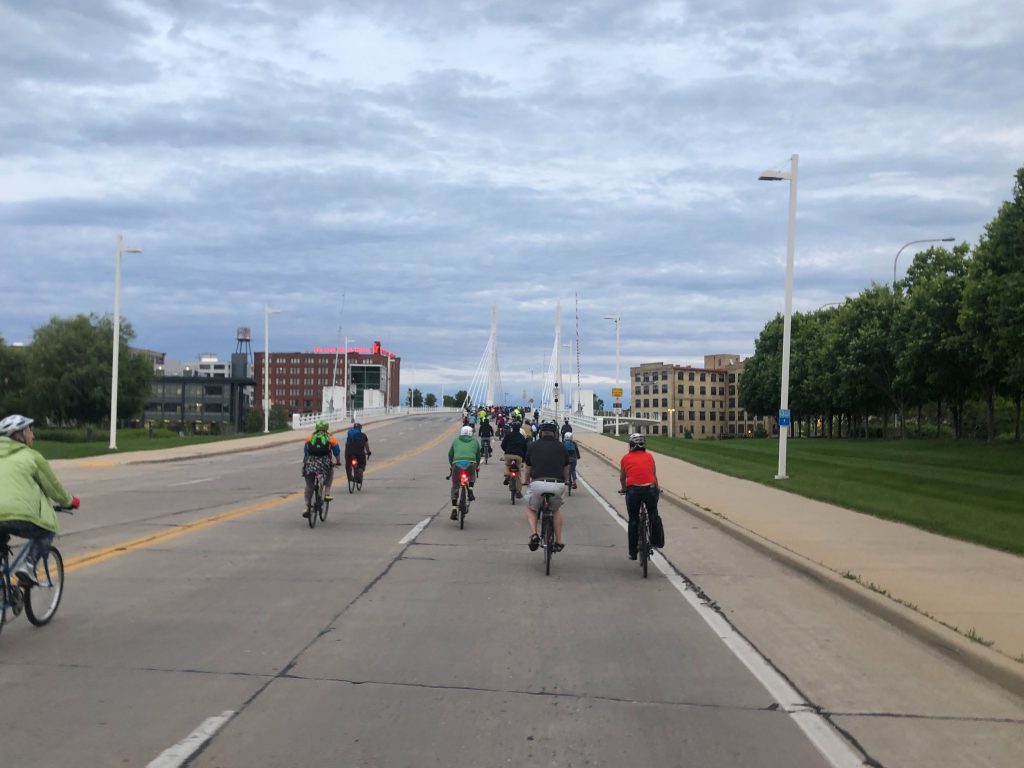 The Department of Public Works (DPW) is looking to improve pedestrian and bicyclist accommodations in three different corridors, including one that would be a new north side bike trail.

The highest profile of the projects is a new off-street trail known currently as the “20th Street Power Line and Beerline Trail.” It would merge a new trail running north-south in the former Milwaukee Northern Railway interurban corridor with a northwest-extension of the Beerline Trail coming out of Riverwest and Harambee. “We have a verbal agreement with We Energies to provide an off-street trail along the 20th Street corridor between Olive Street and Villard Avenue on the north side,” said Amsden. “It’s kind of two trails that connect.” The city acquired a portion of the former Milwaukee Road Beer Line corridor in November that runs from N. 20th St. to N. 24th Pl. via a donation.

“That is some interesting right of way up there,” said Alderman Robert Bauman. Amsden said the corridor is identified as part of the statewide trail network vision known as the Route of the Badger.

Two on-street projects are planned as well. The city is moving to improve safety on W. Oklahoma Ave. from S. 6th St. to S. 27th St. “Primarily pedestrian improvements,” said Amsden. “A lot of destinations nearby, a lot of pedestrian generators.”

Amsden said his department is looking at a road diet (narrowing the street), pedestrian refuge islands, curb extensions and bus bulbs (curb extensions so the bus doesn’t have to weave in and out of traffic) for the corridor. “A big section of that corridor is on our pedestrian high injury network [areas where more collisions occur] which is identified in our pedestrian plan,” said Amsden. “Bikes will definitely be considered, but it’s definitely more of a pedestrian project.” The project would overlap with the S. 13th Street land use plan the Common Council authorized earlier in February.

A third project would redesign 6th St. from the roundabout between W. Florida St. and W. Virginia St. north to W. Michigan St. The segment, which consists of two bridges and an intersection with W. Canal St., was rebuilt in 2002 with two travel lanes in each direction. “Really high speeds on that corridor,” said Amsden. “A lot of excess capacity.”

A portion of the 6th Street study segment is part of the Hank Aaron State Trail which connects the west side of Milwaukee County with Lake Michigan via the Menomonee Valley. A pedestrian and bicycle ramp from the west side of the south bridge down to W. Freshwater Way was added in the past decade to better facilitate that connection, but there is no curb ramp, forcing those wishing to use the ramp to ride on the sidewalk. There are currently painted bike lanes alongside the curb along the entire stretch.

In addition to the bricks-and-mortar projects, DPW is also looking to establish a Sustainable Mobility Action Plan. “We don’t have a comprehensive plan around mobility,” said Amsden. “We are really trying to identify policies and strategies to reduce single-occupancy vehicle trips.”

The action plan would build on the 2019 Milwaukee Pedestrian Plan that identified crash-prone intersections, high usage corridors and strategies to improve pedestrian safety. It would also leverage the 2018 Complete Streets resolution that requires city streets be designed to accommodate all users. “Transportation is changing rapidly as we all know,” said Amsden.

The four projects have an estimated cost of $2.8 million, from which the city would need to contribute $570,000. The remaining funds would come from the federal Transportation Alternatives Program, which grants funds through state agencies. A grant request was submitted in January.

The committee unanimously endorsed advancing the plans. It must next be approved by the full Common Council.