What Comes Next in the Fight Against the Coronavirus?

Will individual choices be enough to keep a spike in cases and deaths at bay? 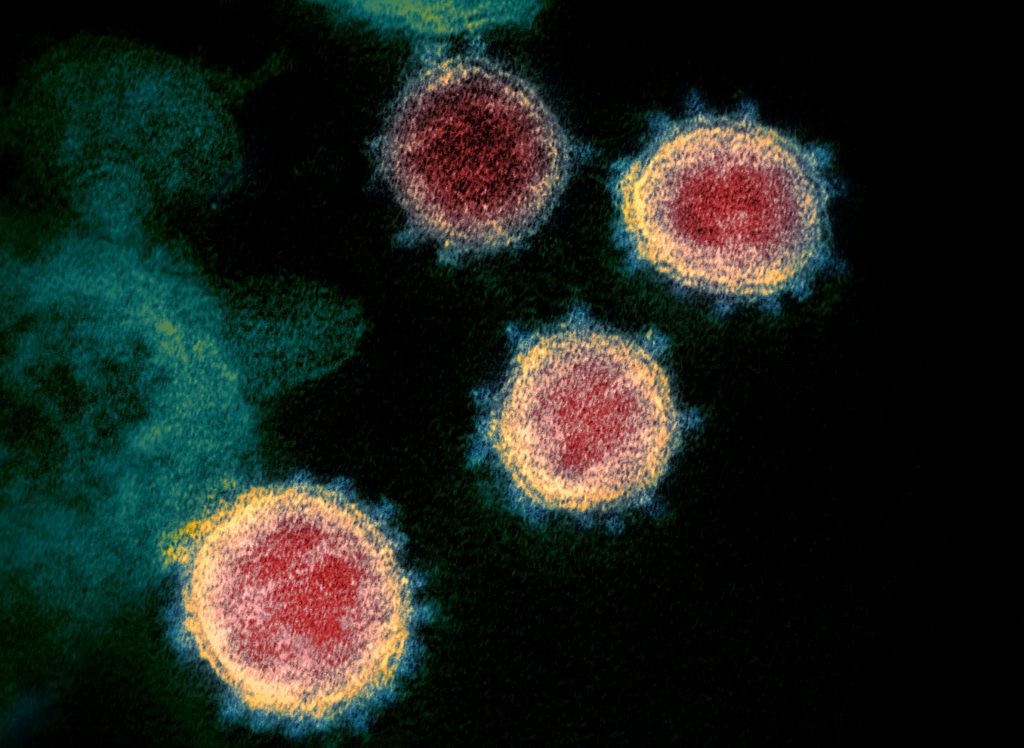 This transmission electron microscope image shows SARS-CoV-2—also known as 2019-nCoV, the virus that causes COVID-19—isolated from a patient in the U.S. Image from the National Institute of Allergy and Infectious Diseases/Rocky Mountain Laboratories (CC BY 2.0).

Wisconsin entered an era of uncertainty following the Wisconsin Supreme Court decision throwing out the Safer at Home order. What comes next?

In late March, as the coronavirus started its exponential expansion in the US, Wisconsinites mostly agreed that fighting the disease should take priority. For example, at that time the Marquette Law School Poll asked a sample of 813 Wisconsin Registered voters, “Do you think the decision to close schools and businesses, and to restrict the size of public gatherings is an appropriate response to the coronavirus outbreak or is it an overreaction that will do more harm than good?” As the left-hand side of the chart below shows, 90% overall regarded the decision as appropriate, including 86% of Republicans. 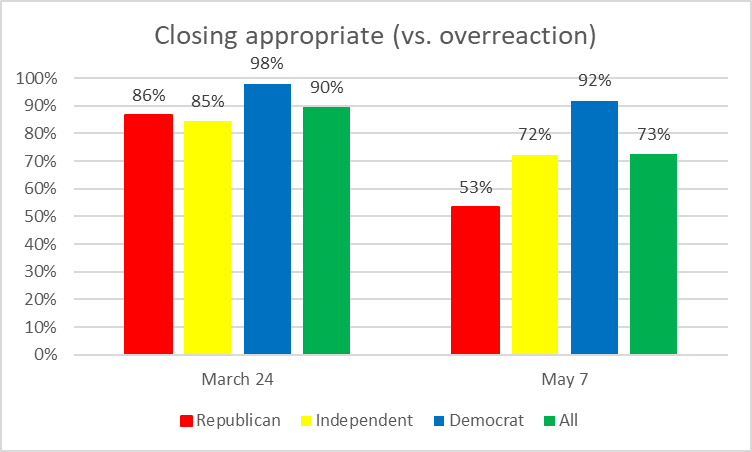 However, when the same question was asked in early May, the proportion of Republicans supporting decision had dropped to 53%. Even so, 73% continued to support the order as a way to reduce the spread of the environment.

The next graph shows evidence of increasing partisanship. A question on the May poll asked, “Which concerns you more regarding the lockdown and stay-at-home restrictions: that we open up too soon or that we don’t open up soon enough?” As the graph shows, 89% of Democrats worried about opening too soon, compared to 73% of Republicans who worried that opening would come too late. That said, a majority of all the voters, 58%, worried that opening would come too soon. 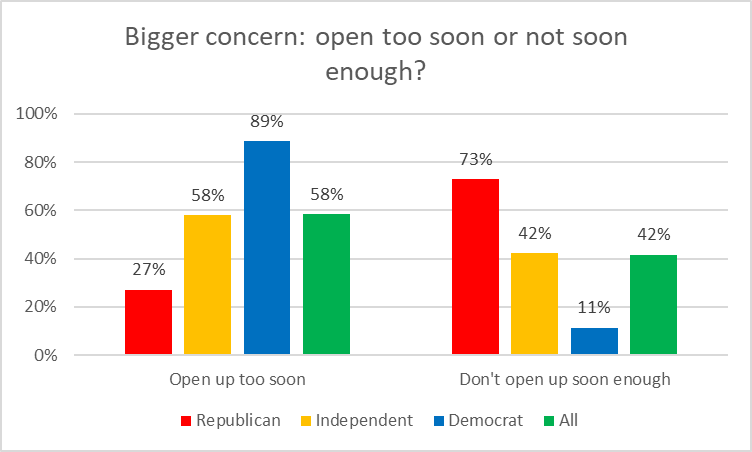 Bigger concern: open too soon or not soon enough?

The next graph shows the responses to the question, “Who do you trust more to decide when to begin reopening of schools and businesses and reduce restrictions on public gatherings, the governor or the legislature?” The partisan split is no surprise, but overall, far more people trusted the governor than the legislature to make the decision. 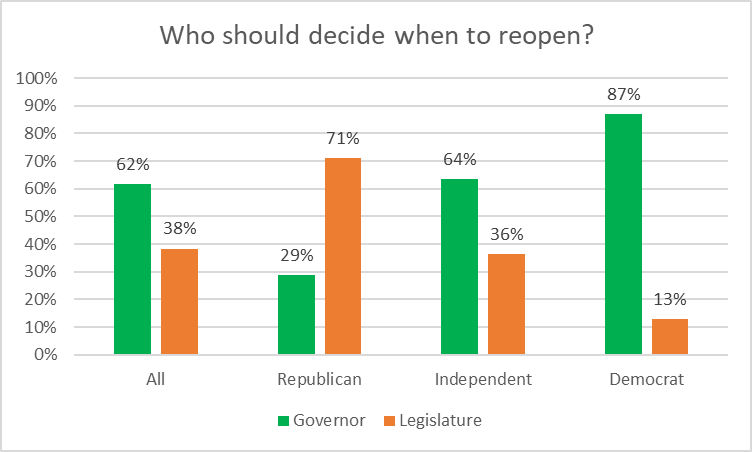 Who should decide when to reopen?

There are numerous other questions on the two Marquette Polls that support the same two conclusions: (1) that there is overall support in Wisconsin for the Safer at Home policy, but (2) support by Republicans has shrunk or vanished for the policy.

And the Marquette Poll is not unique that way. For example a recent Public Policy poll of Wisconsin voters found much the same patterns.

However, in overturning the Safer at Home the Wisconsin Supreme Court ignored public sentiment in favor of safety.

In her dissent, Justice Rebecca Dallet observed that:

This decision will undoubtedly go down as one of the most blatant examples of judicial activism in this court’s history. And it will be Wisconsinites who pay the price.

In his dissent, Justice Brian Hagedorn gives hope that he will evolve into a thoughtful and intellectually conservative judge, something that the court has missed since the death of Justice Patrick Crooks in 2015:

The legislature may have buyer’s remorse for the breadth of discretion it gave to DHS in [section] 252.02. But those are the laws it drafted; we must read them faithfully whether we like them or not.

Or in the words of Justice Dallet:

A majority of this court falls hook, line, and sinker for the Legislature’s tactic to rewrite a duly enacted statute through litigation rather than legislation.

The question of whom to trust with deciding when to reopen the state’s economy appears moot given the state Supreme Court’s decision against Safer at Home, combined with the legislature’s decision to pass on the court’s invitation to discuss a replacement. Like the dog who repeatedly chases cars, only to stop in confusion when one car stops, Vos and Fitzgerald slink home. Apparently, no one has responsibility in most of the state for reducing the impact of the coronavirus.

It appears that presently much of Wisconsin is under no orders aimed at defeating the pandemic. What comes next may be a function of decisions by individuals and businesses.

What, then can we expect in the future? One attempt to answer that question is contained in a recent Trump’s Council of Economic Advisors (CEQ) tweet: 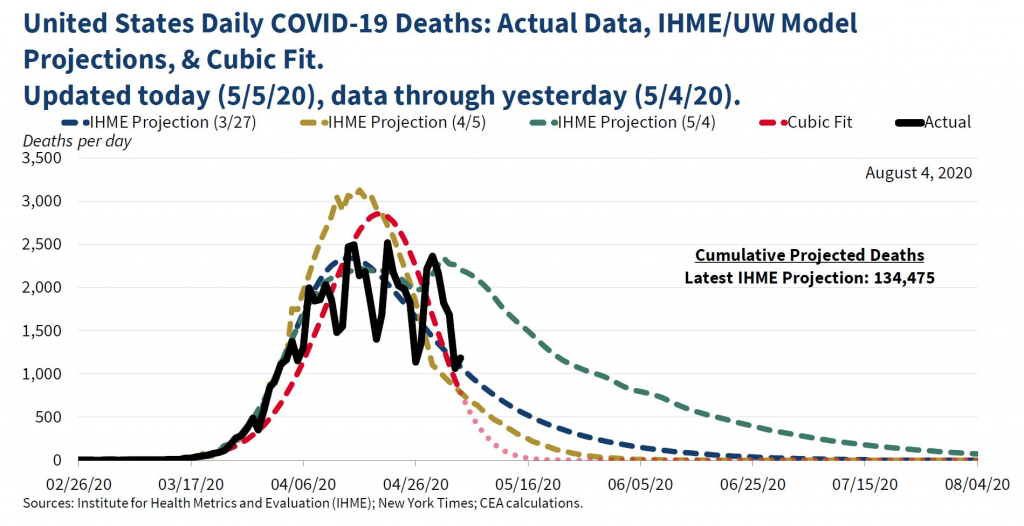 Even the most pessimistic projection—that deaths will end by August seems wildly optimistic to me. The most optimistic—the “cubic fit”—is merely an attempt to fit the data to a bell curve—under the unlikely assumption that deaths will fall as rapidly as they climbed.

The two most recent Marquette Polls asked voters to speculate as when the expect the outbreak to be under control. The voters were given five options: 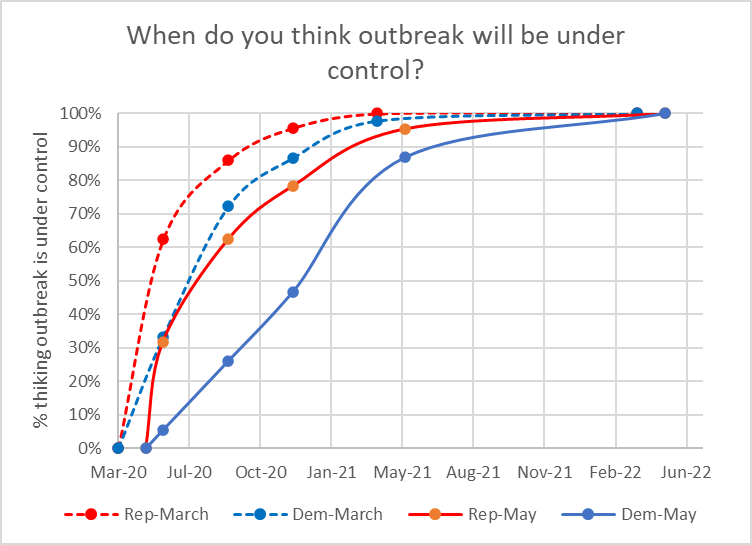 When do you think outbreak will be under control?

The next graph shows the new cases per day for the United States in green and using the left-hand axis. The number of deaths each day is shown in purple and using the right-hand axis. In this and the next two graphs, I use a 7-day moving average to smooth out the curves. A couple of caveats are advisable: as more testing takes place one would expect more cases to be found and it is widely believed that the deaths are underreported and often attributed to other causes. 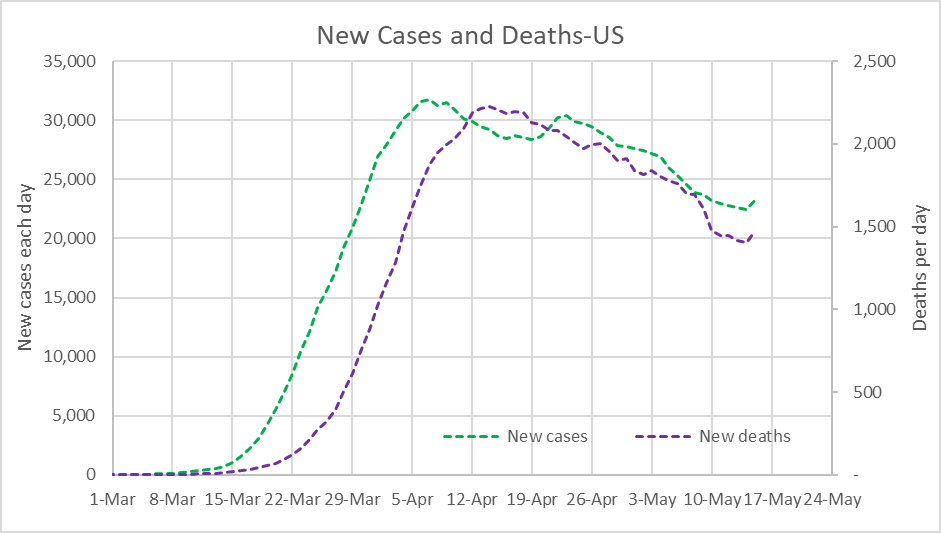 Nationally, the number of new cases and of deaths seems to be making a slow decline. This decline is hardly fast enough to suggest a bell curve and probably not enough for the other curves suggest by the Council of Economic Advisers. It is also likely that the decline in the total is largely driven by early hotspots, such as New York, New Jersey, Detroit, and Washington, DC, as their staying in place policies drive down very large numbers.

Turning to Wisconsin, I divided the state into blue and red counties based on whether a majority voted for Clinton or Trump in 2016. Neither group follow either the national pattern or the various patterns suggested by the CEQ. In fact, both groups had a peak that was followed by a recovery, but then continued growing. For the blue group the peak is mainly attributable to Milwaukee concentrated on black and Hispanic residents; for the red, it is mainly due to COVID-19 at meatpacking plants in Brown County. 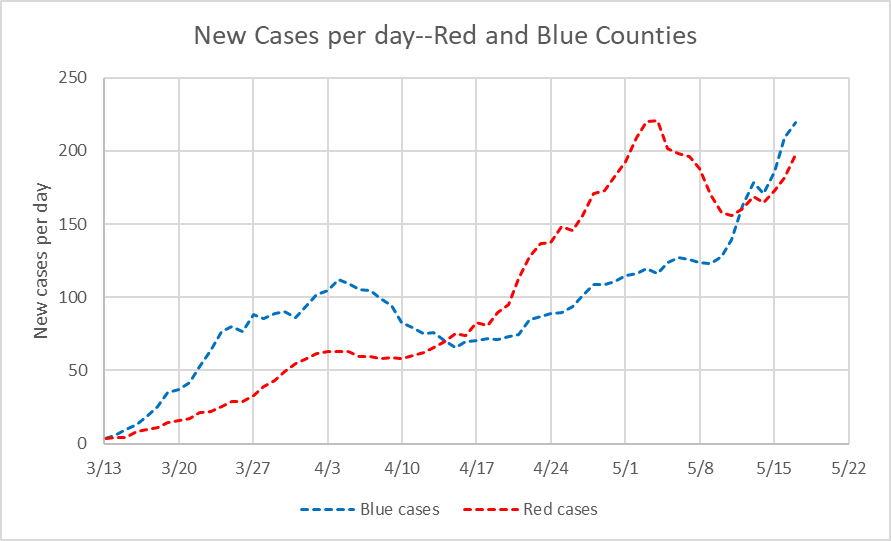 The next graph shows the deaths per day in each of the two groups of counties. Deaths per day peaked at nine in April before declining. These data suggest that the Milwaukee victims were older and less healthy than the meatpacking employees. 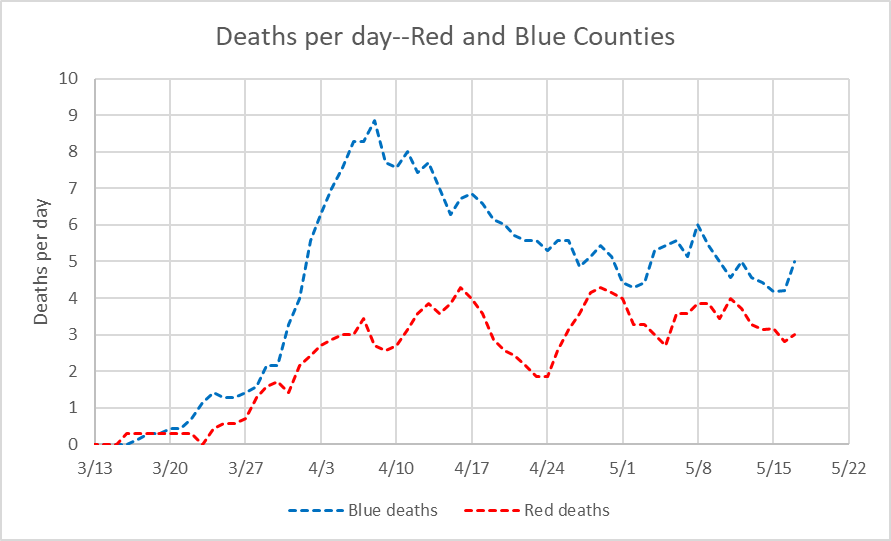 Deaths per day–Red and Blue Counties

As Bruce Murphy pointed out, Wisconsin, under Governor Tony Evers and Secretary Andrea Palm, has performed well against the coronavirus when compared to many other states. Wisconsin sees about 400 new cases every day compared to 24,000 nationwide. Similarly, we have been seeing about eight deaths in Wisconsin every day, compared to around 1,350 in the United States.

That said, the coronavirus is very active in Wisconsin. It is puzzling that Robin Vos and Scott Fitzgerald, along with the justices that shut down the order, want to take responsibility for what happens next. Will decisions by Wisconsin businesses and individuals be sufficient to minimize suffering and death?

Categories: Data Wonk, Health, What You Need To Know