By Melanie Conklin, Wisconsin Examiner - May 7th, 2020 11:44 am
Get a daily rundown of the top stories on Urban Milwaukee 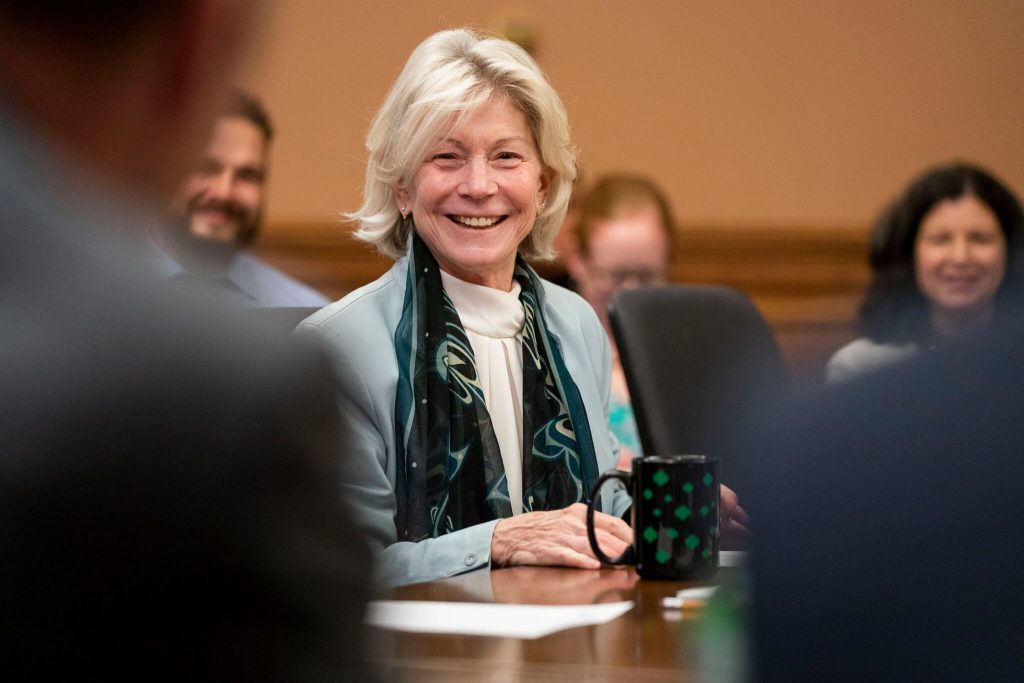 One of Sen. Janet Bewley’s first tasks as the new Senate minority leader was to attend a meeting with Gov. Tony Evers and legislative leaders from both parties on Monday, one day before the Wisconsin Supreme Court heard oral arguments in a case the Legislature brought against the Evers administration to overturn the Safer at Home order.

She got an up-close view of the oppositional dynamics that have been playing out during the pandemic, hindering solutions. She reports that the governor asked Republicans for ideas, but they wanted to solely focus on opening the state up by county or region, while Evers believes in a broad, statewide approach based on  public-health evidence.

Bewley (D-Mason) sees a lot of ingrained behavior playing out,  and believes many of the road blocks come from the Republican-led Legislature having worked for eight years (“it feels like forever”) with a Republican governor. It was  the only experience, she points out, that many of them had.

“I think that in a time of chaos like this, with a lot of change and a lot of moving parts, people persist in their pattern, using the skills and tools they have used all along, but stronger,” says Bewley. “So if your tool was a hammer, you’re just going to put that down and get a bigger hammer.”

“You’ve got to learn a whole new way of dealing with a governor who is not of your party,” she adds. “And at the same time the governor is brand new to being the governor. And he’s dealing with a Republican Legislature that’s like dealing with The Monolith in 2001: A Space Odyssey: There it stands and you will not penetrate.”

As Bewley sees it, changing that oppositional dynamic takes time, and is made more complicated by the difficult and serious issues during the pandemic.

Bewley has been in the minority party since she took office in 2011 — starting in the state Assembly then moving to the Senate in 2014. One of the first confrontations Bewley experienced was the fight over then-Gov. Scott Walker’s union-busting Act 10 and the historic protests that followed.

She sees some similarities between the chaos of Act 10 and the current pandemic, including the need for leaders to be consistent, calm and inspiring whenever possible.

“You know my entire political career has been pretty much finding myself in interesting places and maxing them out doing everything I possibly can, wherever I end up,” says Bewley with a laugh. “And this is another one of those things. Truly, I never really had leadership as my target.”

When Sen. Jennifer Shilling (D-La Crosse) announced that she would not run for re-election and would leave her leadership post immediately, that set the stage for Bewley filling the role through November, when there will be a new group of senators taking the place of retiring veterans  (including long-time senators Fred Risser, Mark Miller, Dave Hansen and Luther Olsen), plus potential changes with the next round of elections.

After the caucus leadership election, Shilling praised Bewley’s skills in a statement, saying: “I know that Janet’s strong and pragmatic leadership will provide a smooth transition and lead to success over the coming months. Democrats will continue fighting for Wisconsin families, workers and the opportunity of a brighter tomorrow.”

The job of a legislative leader, starting in May of non-budgetary, even years, is to lead and oversee the body’s campaign apparatus, in this case the State Senate Democratic Committee.

Half of Wisconsin’s 33 state senators are up for election in any given two-year cycle. Bewley’s seat — which is one of only a few competitive seats between the parties — is not on the ballot until 2022. In weighing whether she wanted the post, she determined she could make the time to lead the Senate Democrats in what is called “outside the building” work, in legislative parlance, AKA campaign work.

The current balance of power in the Senate is 19 Republicans and 14 Democrats. Bewley becomes emphatic when asked if Democrats have a chance of picking up enough seats to take the majority.

“Oh absolutely, absolutely!” Bewley replies, adding with a note of distress, “And the more we see things self-destruct in Washington, the better our chances.”

Democrats have been up against Republican gerrymandered maps since the last redistricting, after the 2010 census, conducted  in private by Republicans and a team of hired lawyers who produced what one federal judge called one of the most skewed, partisan maps in the nation. Still, the map has survived repeated court challenges. Bewley says she’s taking that into account when predicting success.

“If you just look at the gerrymandered maps, we are fighting for districts that were designed to lean red or be purely red,” she says. “So we structurally have that obstacle. But, at a time when the accomplishments of the Republicans — both in the state, and in Washington — are kind of frayed and they’re sort of losing their center, it is a great opportunity for us to show why the Democratic values, and the way we relate to governing, are the better choice right now.”

Democrats, for several election cycles in a row, have made healthcare their number one issue. That is an advantage now, as people want not only reliable healthcare but disease prevention, protection and reliable information.

“I think it’s huge, it’s huge,” says Bewley. “And when, when that is so inconsistent coming from the right, people know that they can relate to the party that has consistently said, ‘We care about your health and we believe in science. We always have, so welcome.’”

But Bewley doesn’t stop there — she says the pandemic also shows Democrats to be the party that is supporting small businesses in the pandemic, because during the April debate over the state COVID-19 bill, Republicans passed a bill that relied on federal aid, without allocating any state funds to combat the crisis. Bills authored by Democrats and Evers, which Republicans rejected, included state funds for struggling small businesses.

“We’re seeing the federal government allocate considerable amounts of money, and yet, the state folded its arms and said, ‘No. No.’ So we literally walked past that Salvation Army kettle and threw nothing in the pot,” says Bewley. “Right now, we can’t wait for anybody to do our job, or give us money. We’ve got it. We’ve got to find a way to give it to people, and that that was defeated by the Republicans.”

Republicans stated during the debate that they felt the state could not afford to fund the bills that the Democrats forwarded.

The third advantage Bewley sees for Democrats is that Republicans in Wisconsin are following President Donald Trump’s lead, which particularly during the pandemic has been chaotic and failed to create calm, effective leadership.

A new stage for Bewley

Bewley’s hometown is Mason, with a population of around 100, in far Northern Bayfield County, an area where tourists outnumber residents two to one in peak summer season.

So she’s very sensitive to a decline in visitors and its potential impact on the economy. However, she says, she already sees cars with out-of-state license plates and people walking around without masks or not keeping their distance who are obviously visitors. This raises an even greater concern for the health of her constituents.

“The region you are dealing with is no longer the region you are dealing with — it’s St. Paul or Chicago or Milwaukee, because that’s the people who come,” says Bewley. “Most people not following social distancing are from out of town. It’s not their home. It’s like, ‘Oh we have clean, fresh air — they don’t have COVID up here.’” She adds wryly, “Well, we might now!”

Bewley comes by her ability to tell an animated story from her background as a thespian, in theater and a bit of television, too. It gives her a leadership advantage as she knows how to convey her vision and speak so she’s heard.

However, she notes, her dramatic flair has made governing in the age of COVID video news conferences and Zoom interviews somewhat difficult as she’s having to train herself to be a bit more restrained.