By Ruth Conniff, Wisconsin Examiner - May 6th, 2020 08:52 am
Get a daily rundown of the top stories on Urban Milwaukee 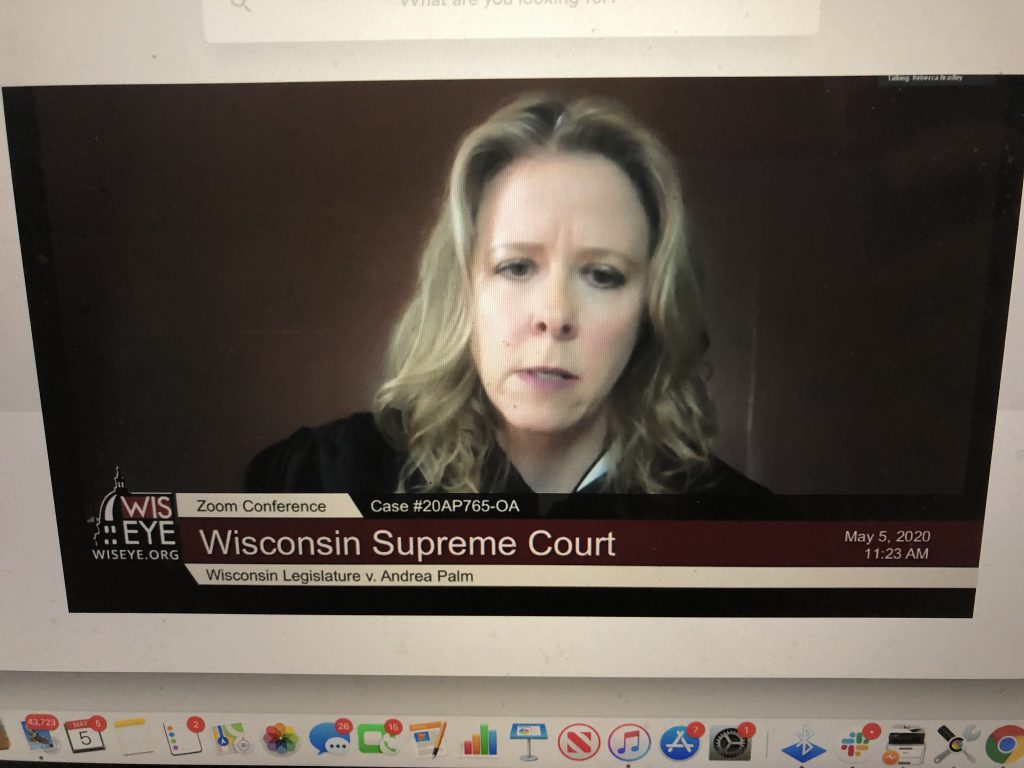 Gov. Tony Evers told reporters last week that he was “confident” the state Supreme Court would rule in his favor, and against GOP legislators who are seeking to overturn Wisconsin’s Safer-at-Home order.

“We have the facts on our side. We have the law on our side. And we have lots of opportunities to share with the Court where this type of action has taken place,” Evers said. “So given that we have all those things on our side, I believe the Court will see the wisdom of our position.”

But in oral arguments on Tuesday, state Supreme Court justices (who observed social distancing by meeting remotely, via Zoom) echoed some of the wilder claims of the protesters who gathered on the steps of the Capitol and outside the governor’s residence to call Evers a “tyrant” and demand that he reopen the state.

Justice Rebecca Bradley asked a series of pointed questions of Assistant Attorney General Colin Roth, who was there to defend the extension of Safer at Home by Andrea Palm, Evers’ secretary-designee of the Department of Health Services.

“My question for you is, where in the Constitution did the people of Wisconsin confer authority on a single, unelected cabinet secretary to compel almost 6 million people to stay at home and close their businesses and face imprisonment if they don’t comply,” Bradley demanded,  “with no input from the Legislature, without the consent of the people?”

“Isn’t it the very definition of tyranny,”  she continued, “for one person to order people to be in prison for going to work, among other ordinarily lawful activities? Where does the Constitution say that’s permissible, counsel?”

Roth pointed out that the Legislature itself conferred authority on the Department of Health Services to close schools and churches and limit public gatherings, and to issue statewide orders to prevent the spread of infectious disease.

The statute in question states that the head of DHS “may promulgate and enforce rules or issue orders for guarding against the introduction of any communicable disease into the state, for the control and suppression of communicable diseases, for the quarantine and disinfection of persons, localities and things infected or suspected of being infected by a communicable disease.” And, it explicitly adds, “Any rule or order may be made applicable to the whole or any specified part of the state.”

If the Legislature wants to change the law, it can pass a new law, Roth said, adding that the case before the court does not include a constitutional challenge.

But Bradley and her colleague, Justice Daniel Kelly, as well as Chief Justice Patience Roggensack continued to press. What, they asked, are the limits on the vast authority conferred on DHS Secretary-designee Andrea Palm?

Bradley was having none of that.

“One of the things this order does is allow people to go to prison for leaving their homes, unless it’s OK with the DHS secretary,” she said. (No one in Wisconsin has been sent to prison for violating the Safer at Home order.) “How can it be that an unelected individual has the power to declare otherwise, usually lawful activity to be unlawful and to in fact criminalize that activity?” Bradley continued. “I think our laws are pretty clear that only the Legislature has the power to criminalize activity.”

There followed a back and forth in which Roth was interrupted several times, by Bradley, Kelly and Roggensack, as they dug into this idea that the DHS secretary was creating new categories of crime.

“Wouldn’t we have to conclude that the order created the prohibited activity that is criminal?” Kelly asked.

“I think we’re approaching this question from what I think is the wrong perspective,” Roth offered.

“Wrong perspective or not, could you answer my question?” Kelly shot back.

Later, still unsatisfied with Roth’s explanation that the Legislature itself conferred upon the DHS secretary the power to issue statewide orders and close businesses and public gatherings, and that it left it up to her “to determine what is necessary to fight the disease,” because “the Legislature cannot possibly in advance predict all things that someday might be necessary”  and “in fact, that has been recognized for over a century,” Bradley brought up the internment of Japanese-American citizens during World War II.

Is that the kind of thing we might expect the DHS secretary to order here in Wisconsin? she asked.

“Could the secretary under this broad delegation of legislative power or legislative-like power order people out of their homes into centers where they are properly socially distanced in order to combat the pandemic?” she asked.

The problem with this question, apart from the fact that it bolsters the kind of fringe views displayed on signs at Reopen rallies, is that the Court is not actually considering a constitutional challenge to the Safer at Home order. Nowhere in the case do legislators bring up the idea that citizens’ fundamental constitutional rights are at risk.

Instead, the Legislature’s argument, aggressive though it is, boils down to this: The statewide order issued by the DHS secretary isn’t really an order, it’s a rule, and therefore it should go through the regular (and time consuming) legislative rulemaking process.

The other big problem, Roth pointed out, is that because the Legislature itself wrote the statute conferring powers to take drastic measures to stop the spread of infectious disease upon the DHS secretary, if they want to change that law, the proper remedy is to pass a new one — not try to get it overturned in court.

“Your Honor, I think you take the statutory text as it is,” Roth told Bradley. “The statutory text empowers DHS to take all necessary action to combat communicable diseases. I understand your honor may be uncomfortable with that broad grant of authority, in the sense that you think it may allow DHS to go too far. I humbly submit to you that that concern is best addressed to the Legislature and asking them to amend the statute that they passed and lobby them to add limitations in the kind that your honor is discussing.”

Meanwhile, the pandemic rages on. Wisconsin’s cases, although somewhat flattened by the shutdown of the state, are still on the rise.

Reopening the state could lead to a sudden surge, Roth warned, pointing to the recent spike of cases in Brown County.

That’s when Chief Justice Roggensack made a curious observation.

“Due to the meatpacking, though — that’s where Brown County got the flare,” she said.” It wasn’t just the regular folks of Brown County.”

It’s not clear whether Roggensack meant that somehow the many Latino meatpacking employees in the area are so segregated that they can’t transmit the virus to the rest of the (white) population. But the spike in cases in Brown County is already spreading rapidly throughout the area.

Roth left that remark alone and continued with his point about rapid reopening causing a quick rise in cases.

“It’s like a wildfire,” he said. “It’s smoldering, but a gust of wind is going to, you know, fan the flames and it’s going to explode again. I mean, that is exactly what’s going to happen. You’re seeing it all around the world as these restrictions are lifted.”

On the other side, the attorney for the GOP legislators, Ryan Walsh, did not concern himself with how the lawsuit might affect the risk of infection for Wisconsinites.

“This case is not about whether a lockdown is a good idea,” he said at the outset.

Instead, it’s about how the Department of Health needs to “sit down at a table with the very body whose powers it exercises and which created the department in the first place, the Legislature.”

The legislators’ case seeks the nullification of the Safer at Home order, but asks that the court hold off on enforcing that decision for six days, in order to give the Legislature time to come up with a new plan for dealing with the pandemic. (Briefs filed by the Evers administration and various experts argue that it would take much longer than that for the legislative rulemaking committee to come up with a rule, and even longer to make adjustments to deal with a rapidly evolving crisis).

Walsh said the six-day window was created to answer any possible objections DHS might raise to the lawsuit. But, he added, the court is free to simply do away with the order outright:

“If there is a period of six days during which this injunction is not enforced, that takes all of DHS as arguments off the table,” he said. “So we’ve simply suggested that the court may wish to do that, but of course the court may wish to simply enjoin the order immediately because it is unlawful.”

But what would happen, Justice Ann Walsh Bradley asked, if the order were eliminated outright?

“What kind of chaos in your mind would exist if this court just simply said the order is unlawful, and that’s it?” she asked. “What are the ramifications for the people in the state?”

Walsh (the lawyer) replied: “The ramifications, Your Honor, are that the governor and his agencies, which derive their powers from the Legislature would need to sit down with the legislative branch to come up with a bipartisan, sensible response to this pandemic going forward.”

Not a word about the upshot for the thousands of citizens who might sicken and die in the meantime.

“It’s complicated questions that are presented here,” Roggensack summed up. “And in addition to that, there’s an awful lot of emotion that’s tied to them because we are in the middle of a pandemic, which all sides agree on.”

With that, the Court adjourned and the justices prepared to meet in closed session. They could issue a ruling at any time.