By Isiah Holmes, Wisconsin Examiner - May 4th, 2020 12:14 pm
Get a daily rundown of the top stories on Urban Milwaukee 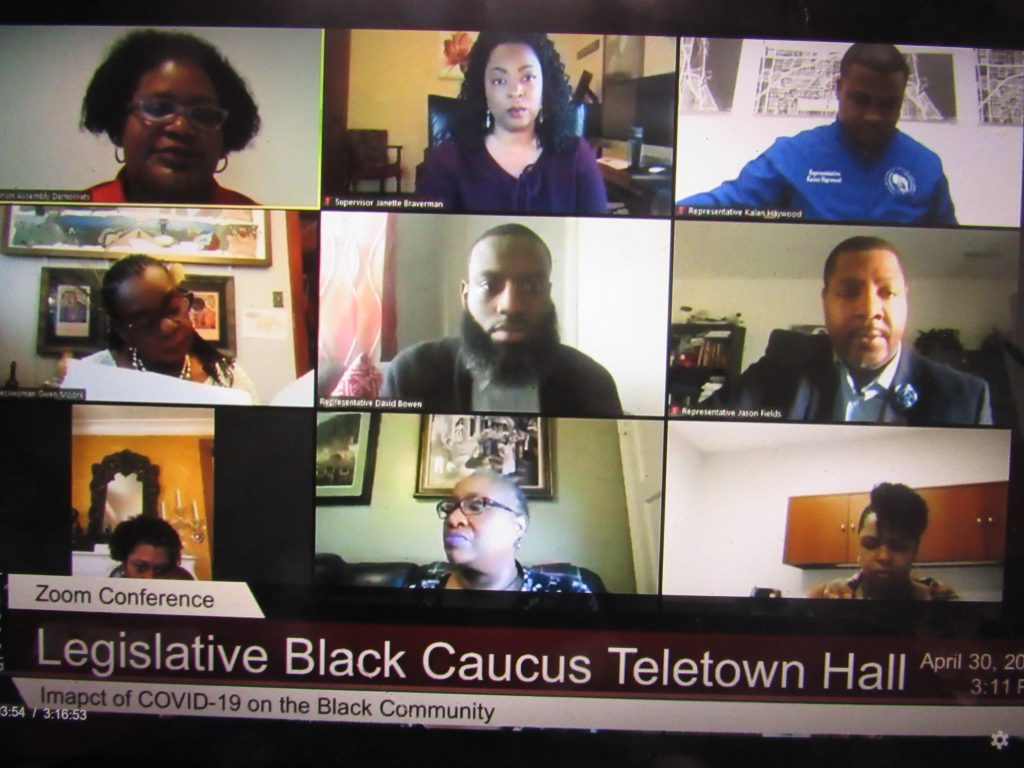 African-American elected officials say black communities are shouldering the brunt of the illnesses and deaths from COVID-19, but also suffering due to a lack of accurate information and leadership on a national level.

So they are countering that misinformation by providing opportunities to share experiences, data and accurate medical information with their constituents.

To fill that gap, the Wisconsin Legislative Black Caucus hosted a town hall on April 30, providing a deep dive and their perspectives on the challenges presented to their communities by the COVID-19 pandemic.

“There’s a lot of information that just doesn’t get out to people that needs to get out,” said Lt. Gov. Mandela Barnes during the town hall. “Especially as it impacts our community in this devastating way. In this disproportionate way.”

Thursday’s event featured Barnes and Moore, along with two African-American state senators, eight state representatives and several local officials who heard from experts in education and healthcare on the impact of COVID-19 in communities of color.

Participants discussed their own personal experiences, the concerns they’re hearing from constituents and the debates at the state-level about where to go from here.

Such a broad conversation is needed because, Barnes pointed out, COVID-19 has raised issues that are often discussed, but rarely addressed.

“That is the structural racism that exists with income inequality, the lack of access to healthcare and affordable healthcare,” said Barnes. “People don’t always have a primary care physician, people don’t always show up to a doctor if they’re feeling sick because they don’t know how they’re going to pay for it.” The African American community finds itself at the nexus of many of these deficits. “There’s not something that makes black people more prone to contracting coronavirus. A lot of the systemic and social inequities already existed, forever,” said Barnes.

Trust in authority figures is often missing, Barnes noted, particularly in low-income communities — whether it’s trust in the healthcare system, or trust in official information. Even Rep. David Bowen (D- Milwaukee), after contracting the virus, found himself wondering, “What have I been told about this virus?” he said on the call. “Of course, the president of the United States called it a hoax. Of course you had friends in your ear saying, ‘Oh it’s just the flu.’”

Bowen feels that as the pandemic started, communities and individuals were unprepared for the impact it could have on them.

The only federal official on the call, Moore (D-Milwaukee) discussed the first wave of federal COVID-19 relief efforts, including $1,200 stimulus checks the went to individual households. The federal legislation was criticized for giving large amounts of money to private companies, and inadequate support for social safety net programs. Moore agrees with the critics: “The SNAP program, or so-called food stamp program, there were increases in that fund but they did not expand eligibility, which was a source of disappointment to us.”

Instead of helping small businesses, she added,  the Paycheck Protection Program, which started out with $350 billion, was out of funds within 48 hours, after giving grants to large, publicly-held corporations.  “This was not who the intended recipients were,” she said.

There was also federal support for credit unions, and other more community-oriented organizations. Still, with the country experiencing what Moore describes as “an economic pandemic,” more support will be needed, particularly for low-income communities. Unfortunately, she added, the results of the first wave of stimulus support doesn’t offer these struggling communities much confidence.

The United States now leads the world in positive COVID cases with well over a million cases at the time of this writing. Since people with pre-existing conditions or vulnerable immune systems are at higher risk, in America, a large number of people in poverty, largely from African American and other minority communities, are disproportionately represented among the worst cases.

During the call, Bowen discussed his own experience battling and recovering from COVID-19. He’d recovered from the illness shortly before Wisconsin’s controversial April 7 election. Upon recovering, Bowen, who represents some of Wisconsin’s communities most stricken by the virus, volunteered as a witness signature for  people who voted absentee.

“I came in contact with a local elected official in Shorewood,” Bowen recounted, “thought nothing of it. We sat down in the cafe, we talked, we caught up, and within 48 hours I started really feeling like these cold symptoms.” Body aches, chills and coughing might not sound like much, “but usually those things go away after a couple of days,” Bowen noted. “Not only did it not go away but the symptoms ramped up.”

Still, Bowen says, at the time, he was in denial. A flurry of misinformation was circulated online and in the community, including the rumor that African Americans couldn’t catch COVID-19. Other town hall speakers heard similar things and Bowen said it contributed to his initial denial.

“This has to be something regular,” Bowen thought to himself at the time. Then, he recalls, “I got an official call from the North Shore Health Department saying, ‘Hey we think that you’ve been exposed to COVID-19.’”

After that, everything seemed to go downhill. “You’re talking about a fever at 104 degrees, you’re talking about the shortness of breath that happens in your lungs.” The chills grew so intense that the 33-year-old was wearing a winter cap inside his home at all times, despite how warm his body actually was.

While Bowen made a full recovery, many others in the same neighborhood were not so lucky. Milwaukee County represents Wisconsin’s highest concentration of COVID-19 cases, at nearly 3,000 of the state’s 6,854 confirmed cases at the time of this writing.

Over 180 people have died in Milwaukee County, with the majority being African Americans between the ages of 60 and 80 years old. Cases are found throughout the county, from Wauwatosa to the Lakefront. However, the densest clusters are throughout the largely African American North Side, and the predominantly Hispanic South Side.

Dr. Kevin Izard, of the Cream City Medical Society, explained that a lack of immunity to the virus triggers a chain reaction in the body. “People’s immune systems tend to overreact to it,” he said, going on to state that researchers are unsure exactly why people with pre-existing conditions can have such bad outcomes.

“We think it has something to do with the fact that there’s something involved with this virus that causes the immune system to overreact, and is causing some micro-vascular clots.” In other words, blood clots form in the organs, which can trigger organ failure. “So it’s not just their lungs, not just pneumonia,” Dr. Izard emphasized. “The kidneys shut down, the liver fails and other things and that’s why they end up dying.”

Izard said that Milwaukee was actually one of the leaders in revealing the racial disparities in the COVID-19 death data. Unlike many other places, Milwaukee was reporting its data based on race.

It’s no mystery, he said, why African Americans are becoming a face of the pandemic’s worst outcomes. “We’re likely to have high blood pressure, diabetes, asthma, heart disease, those kinds of things,” said Izard.

Another major contributing factor is population density, which allows the virus to spread faster. In rural areas, with fewer people and potentially fewer individuals living under one roof on average, COVID-19 does not get the physical proximity it needs to spread quickly.

On the call, Lt. Gov. Barnes said that the pandemic of 2020 has exposed a plethora of injustices in society.

“So many people can get away with ignoring that this is happening,” said Barnes. “But the first step, just like anything else, is acknowledging that the problem exists.” He questioned why issues like expanding BadgerCare have to be so polarizing, particularly for people who haven’t experienced what it’s like to have to choose between, “putting food on the table, paying rent or paying for health insurance.”

In a major health crisis like COVID-19, it’s important to build trust between the healthcare system and low-income, minority communities, in areas populated by people who don’t go to the doctor often because they can’t afford it, or don’t trust the process, he said.

“This has exposed the huge flaw that we all knew existed in healthcare in America,” he continued. “We need to move towards a more universal system, because what we have is just not working anymore.” Barnes harkened back to the Democratic presidential debates, where expanding the healthcare system was a focus.

African-American representatives, who find themselves among the fortunate people who have good healthcare coverage, but who represent many constituents who are not so lucky, say the inequities weigh heavily on their minds.

This is particularly true because due to the COVID-19 pandemic, Barnes added, many people who had even some health insurance lost it along with their jobs when everything shut down.

Barnes also pushed back against growing rhetoric in Wisconsin, advocating for Milwaukee to remain shut down while rural and suburban communities return to ordinary life.

“Re-opening the state doesn’t mean that the state is going to recover right away,” he said. “You can open up every restaurant, every retail store tomorrow, it’s not like people are going to start showing up. Some people will, but it’s not like that is going to save our struggling businesses.”

Barnes criticized Majority Leader Scott Fitzgerald and others in the GOP for wanting the state to open up right away, but not taking into account the loss of life that could be the result.

“That has been absent from every statement,” he said. “You even get people who say, ‘Well this is a Milwaukee issue, this is a Madison issue. Well, you are a state legislator. That means you are responsible, in some way, for every part of the state. Even when I was a state representative, every vote that I cast had a statewide influence. It mattered in other parts of the state.” Going further Barnes declared, “I don’t know any of us from the Milwaukee delegation or Black Caucus that could ever get away with saying some of the things that they say.”

The leaders on the call stressed that COVID-19 is a statewide issue, including the latest hotbed — Brown County, with over 1,000 confirmed cases. Increasing Wisconsin’s testing capacity is critical to tracking the virus’ spread. And, the African American leaders said, any solution has to take everyone into consideration, since no one has the privilege of being immune to the virus.

Barnes called state legislators’ discussion of a piecemeal reopening “ridiculous.” He added, “Why even want to be in the Legislature if there are parts of the state that you are ready and willing to write off in that way?”