By Erik Gunn, Wisconsin Examiner - May 2nd, 2020 09:47 am
Get a daily rundown of the top stories on Urban Milwaukee 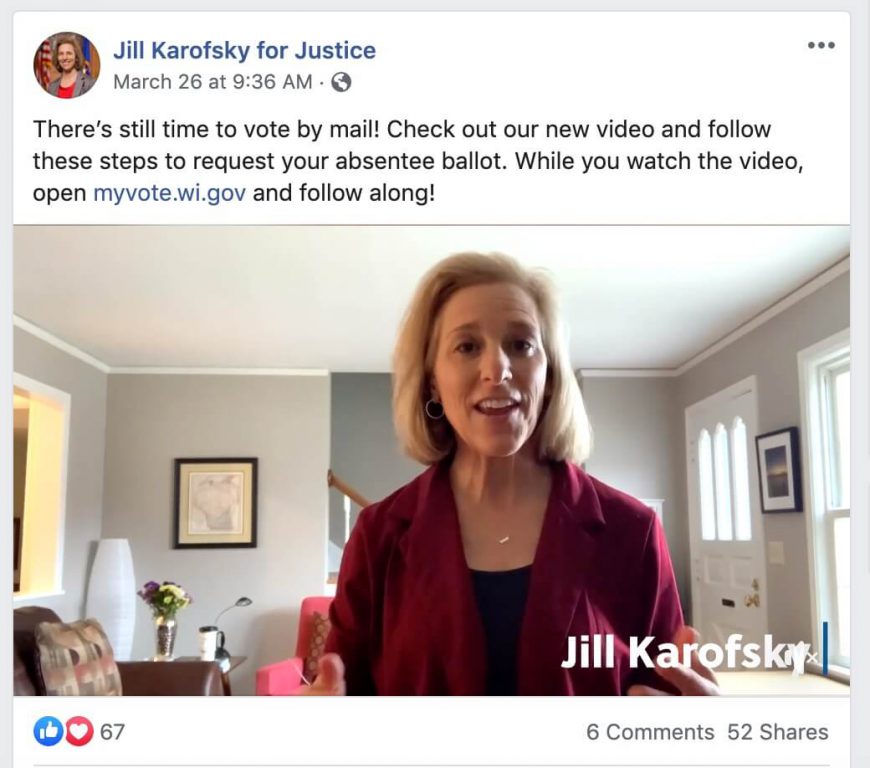 The Karofsky campaign moved events to social media and Facebook live amid the COVID-19 pandemic. Photo from Jill For Justice Facebook page.

In a video on its Facebook page, Democratic Party spokesperson Philip Shulman looked at the camera and walked through a point-by-point takedown of President Donald Trump’s claims on his nightly videos about the pandemic.

Of course, that’s part of Shulman’s job as the voice of the Democratic Party’s Trump rapid response operation in Wisconsin. But a few things stood out. The video wasn’t presented as a 30- or 60-second TV spot. It wasn’t even on TV, just on social media.

The format is professional yet informal, and the temperature is relatively cool. The format “really allows us to communicate what the facts are and tie it into how it affects people in Wisconsin,” Shulman says. By “connecting all these dots for people,” he hopes to be able to get across the message of “Trump’s failure to Wisconsinites.”

Shulman says more videos will be rolling out over the 2020 presidential campaign — “sometimes longer videos, sometimes shorter snippets” — and what sets them apart from past efforts is a greater emphasis on hard information and explanation.

And another thing: For the foreseeable future, with perhaps the exception of direct mail, these videos and other digital offerings will be just about the only way Democratic party activists can reach out to voters. COVID-19 and the accompanying statewide Safer at Home order that keeps state residents off the street and hunkered down at home have rewritten the dynamics of political campaigning.

Republican Party of Wisconsin officials didn’t respond to Wisconsin Examiner inquiries about the GOP’s digital operations in 2020. At a panel earlier this month, however, RPW Chair Andrew Hitt said that, like the Democrats, his party made its own transition.

“I was very happy with what we did and how fast we adapted,” said Hitt. “We all had to adapt to virtual.”

At Democratic Party headquarters operatives had to shelve, for now, a massive party campaign to turn out activists to knock on doors all around the state and talk up Democratic candidates for offices ranging from the President of the United States on down to state lawmakers.

It might seem to be a drastic and deflating move to cancel face-to-face campaigning in favor of a digital-only effort, but Shulman and DPW chair Ben Wikler say that the distinctive nature of the COVID pandemic and the Safer at Home requirement impart an advantage to the change.

With many people required to stay home, and also intensely concerned about how the disease could affect not just their health and life but their livelihood, “they’re spending a lot more time on the internet and a lot more time on social media platforms,” Shulman says. “It gives us a bigger window to tell a bigger story.”

“There’s a bigger hunger for this information because people have the time,” Shulman says. “This is touching everybody’s lives. There’s no one who’s immune to this.”

In its digital migration, the party is making a virtue of necessity.

As the first wave of news about the novel coronavirus from Wuhan, China, was taking hold early this year, Wikler and DPW staffers began discussing the potential impact on the 2020 campaign.

“In February epidemiologist and health experts started forecasting that this epidemic was going to start sweeping the world,” Wikler says. “I remember reading projections that anywhere from 20% to 70% of Americans would get infected.”

He asked staffers to draw up alternative scenarios for the campaign. “We started talking about what it would look like to switch to an all-virtual organizing plan if necessary.”

By early March, when he talked to a large cadre of volunteers who had planned to come to Wisconsin to knock on doors around the state for the April 7 state Supreme Court election — for a theoretically non-partisan seat, but what in most recent years has become a de facto Republican-vs.-Democratic Party contest — Wikler says the decision was already clear: It wouldn’t be appropriate to ask them to carry through with the original plan.

“By the time the federal government issued its first guidance about stopping large-group gatherings, we had a fully fleshed-out virtual strategy ready to go,” he says.

From venting to problem-solving

At a March 12 staff meeting, Wikler encouraged people to give vent to their fears and anxieties about the pandemic’s potential outcomes — “the collective ‘oh, shit’ moment,” Wikler says. “I read an article that suggested having your ‘oh, shit’ moment early so you could switch into problem-solving mode.”

Training — “three years building an armada of people knocking on doors” — switched to how to use Zoom calls to reach out to organize voters and supporters. Volunteers learned how to effectively use text messaging in the place of placards left at people’s screen doors.

Wikler acknowledges that under normal circumstances, phone calls are less effective than door-to-door visits. This time, though “we’re also finding people have more time and are more likely to pick up the phone.”

One tactical change was to organize phone banks so that the volunteers calling would be connecting with people in their own community instead of just anyone, he says. “We’re having a higher connection rate and warmer conversations than conventional statewide [campaign] phone conversations.”

Voting by mail is a particularly resonant issue with voters, organizers have found, and so information about how to do that is welcomed by many who are at the other end of the campaign volunteers’ lines. “People are deeply motivated to vote right now, and they’re trying to balance the urgency of voting with their fear of the pandemic,” says Wikler. “Campaigning about voting from home is a useful service.”

Shulman says the party’s shift to an all-digital strategy was made easier because it had already built a strong organizing structure that made use of digital tools, and forging “long-standing relationships” dating back to a year before the 2018 “blue wave” election in which Democrats swept the state’s top offices.

The Supreme Court race was the test that proved the party had made a successful transition, Shulman says.

Does that mean door-knocking is gone for good? No, he says, although when it will be back is hard to predict as the COVID-19 pandemic continues to overturn normal  life in almost every way.

Wikler agrees. Just as “TV and the internet didn’t eliminate radio,” he says that digital campaigning won’t take the place of pressing the flesh — just augment it as never before.

“In-person campaigning will be back the moment it is safe,” says Wikler. “But we’ll never lose the new tool of virtual campaigning.”