The Rise of The Bay View Home

Since Great Recession, houses in neighborhood are among only 6 percent of those in city that have risen in value.

For the first time since the Great Recession, the commercial and residential properties in the city of Milwaukee are collectively assessed at a higher amount than they were before the economy faltered in 2008.

But that rebound hasn’t been spread evenly across the city. And when factoring in inflation, most houses in the city are still worth less than they were in 2007.

Figures released last Friday by the Assessor’s Office show residential and commercial values in the city, designed to be current as of a pre-pandemic January 1st, have grown to $30.5 billion. But using the Consumer Price Index to adjust for inflation, Milwaukee properties are now worth $4 billion less than they were at their peak.

Just six percent of single-family homes in the city are worth more in 2020 than they were 2007 according to an analysis by Marquette University research fellow John D. Johnson.

The most visible exception? Bay View, the city’s largest neighborhood. 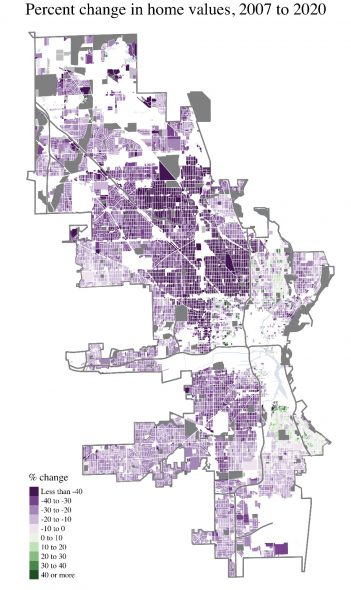 Looking at Johnson’s map of property value changes, much of the city is colored purple to represent a decline in value. But the southeast corner of the city is the rare green spot.

The median property in the neighborhood was worth $198,436 in 2007 after adjusting for inflation. It’s now worth $203,750. Johnson’s analysis includes one to four unit properties, including single-family homes, duplexes and condominiums. In Bay View that’s 5,466 properties, the highest total in the city.

The city defines the neighborhood as stretching from the Kinnickinnic River on the north to E. Morgan Ave. on the south. The western border is the river and Interstate 43, with Lake Michigan and S. Kinnickinnic Ave. (south of E. Oklahoma Ave.) serving as the eastern edge.

What’s driving the Bay View bump? The area has become a hotspot for new restaurants and other businesses. It’s also become the site of a handful of new apartment buildings. But neither of those factors directly influence the value of houses.

Instead it’s a desire by individuals and families to buy properties in the neighborhood. Assessments are generally a lagging indicator of property sale prices. Individuals are voting with their feet and others are investing in their properties.

Bay View isn’t the only neighborhood to experience a boost, but because of its size it represents 62 percent of the 8,752 homes in neighborhoods that have. Fernwood, southeast of S. Kinnickinnic Ave. and E. Oklahoma Ave., has also seen an increase. The median home there is worth $207,168.

The Historic Third Ward and Harbor View, the portion of Walker’s Point east of S. 1st St., have also seen an increase in median value, as has Yankee Hill, the northeast corner of Downtown. Each neighborhood is dominated by condominiums.

On the far northwest side, Park Place and Dretzka Park have seen increases in excess of $63,000, indicating that new construction has likely propelled the median home value upward in value. But the neighborhoods have only 134 qualifying properties between them.

The Triangle and Triangle North neighborhoods, located along W. Fond du Lac Ave. between N. 20th St. and Interstate 43, have also seen a median value increase. The area is better known as Lindsay Heights. New homes have been constructed in the neighborhood and the city and private partners, including Walnut Way Conversation Corp.. have made a concerted effort to boost the fortunes of the neighborhood.

In Riverwest, the median home is down $142 in value.

But that’s it, the rest of the 182 city-defined neighborhoods have seen their values fall by almost $2,000 or more.

The reality of the situation is bad news for city finances. With a heavy reliance on property taxes, the city finds itself in an increasingly cash-strapped position. If the rest of the city kept pace with Bay View, budget issues would be substantially less dire and the overall tax rate could likely be reduced.

You can read Johnson’s report in full and look at neighborhood-by-neighborhood changes on the Marquette Law School website.