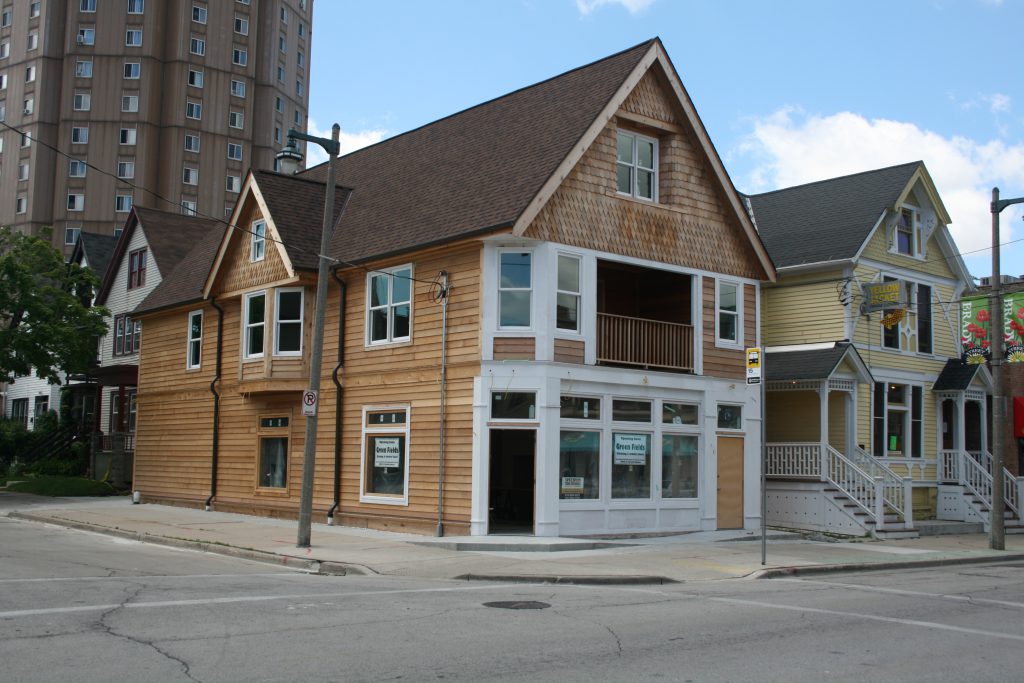 German-themed food, beer and live music may soon be coming to Brady St. under the roof of a new tavern called WurstBar MKE.

The future tavern will open at 1239 E. Brady St., where Green Fields currently resides. WurstBar MKE was conceptualized by partners Scott Schaefer, Andrew Fronek and Darryl Towers — the trio that owns both Milwaukee Brat House locations as well as Jack’s American Pub — just a block away on Brady St.

According to a press release, WurstBar MKE will “blend traditional and contemporary culinary perspectives on German food, focusing on sausages.” The menu will utilize ingredients sourced from Usinger’s Sausage Company and the more contemporary-inspired options are inspired by Berlin-style street food such as doner kebabs, poutine and currywurst.

“There is a great German heritage in Milwaukee and we thought about how to take that heritage and make it Brady St.,” co-owner Fronek says. “We didn’t want to do another brat house concept, but looked at Berlin as far as traditional yet temporary goes and the wheels started turning.”

WurstBar MKE will also offer German beer, wine and hand-crafted cocktails. Tap beer will rotate seasonally and a stein club will be established in order to highlight some of those beers. According to a press release, WurstBar will sell “Unique packaged beer that represents the traditional-yet-modern motif.” The tavern will serve lunch, dinner and late-night eats, with takeout options and delivery via Grubhub. Documents submitted to the city cite Von Trier and Old German Beer Hall as similar businesses.

As for entertainment, WurstBar MKE will host live German music, pub trivia and German sports viewings. The tavern will eventually host annual Oktoberfest and Christkindlmarket events. A jukebox and hammerschlagen game will also be on site.

But in order to make this possible, the building, constructed in 2010, will undergo some renovations. Currently, Green Fields operates out of the first floor of the building and the second floor is an open-concept Airbnb short-term rental unit with a floor plan that resembles the first. WurstBar MKE will utilize both floors. Additions will include a kitchen and cold storage in the basement and bars on the first and second floors. Additional windows will be opened, and German bench-style seating and other German motifs will be added.

Documents submitted to the city cite Schaefer as the owner of the building. While it’s rare to see the COVID-19 pandemic benefit small business owners, it’s the reason that Schaefer and his partners were able to obtain the property that they did. An initial offer on the property wasn’t accepted, but after the Safer at Home mandates were put into place and businesses began to close their doors, Schaefer’s broker notified him that if he were to make that same offer again, Green Fields would accept this time around. Green Fields posted on its Facebook page on March 18 that it was closed temporarily, so it’s possible the business will reopen at a different location.

The new bar is one of many establishments planned for Brady Street. Just two doors down a new burger joint is planned, and across the street, a new bar from a former Jack’s manager is taking shape.