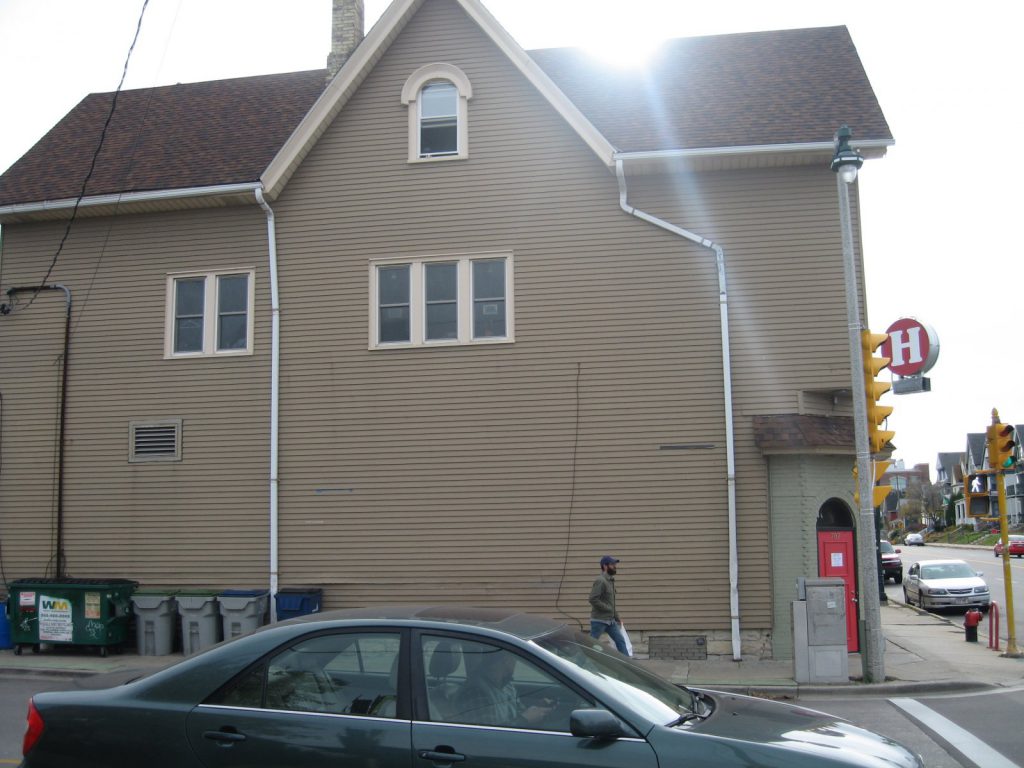 The walk-up window will be located to the right of the vent. Photo by Michael Horne.

Brady Street could soon have a new late-night burger shop.

Brothers Anthony and James Roufus have applied to open a restaurant called Hot Box Burger Shop inside the kitchen of the former Hybrid Lounge space (707 E. Brady St.), which is being redeveloped by their cousin, Salvatore Sivilotti. If approved, Hot Box would operate as a walk-up window that serves take-out orders that closely resemble street food. Diners will order at the window, wait to be called and can then either take it home or eat in small patio and seating area outside. “Think old school Milwaukee restaurant,” James Roufus said in an interview with Urban Milwaukee. “It’s going to be a little something that’s missing from the East Side.”

Menu items will have a mix of eastern European and Mexican influence, but Roufus describes Hot Box as “Milwaukee fare.” He likens the business to Kopp’s and Kitt’s Frozen Custard, and says the main focus will be on butter burgers. Other offerings will include custard, sausages and sandwiches. While the business will not offer any hard alcohol or wine, there will be tall boy cans of beer and beer cocktails, such as micheladas.

Roufus says that he and his brother grew up on the city’s South Side, but his family has strong ties to Brady Street. The brothers’ mother and grandmother grew up in the Brady Street neighborhood, while their father met their mother through his friends that lived in the area. Hot Box intends to emulate the restaurants his parents and grandparents enjoyed when they were younger and that as kids, Anthony and James got to know. “There’s a lot of higher-end bar food going on and it’s not what I would call ‘true Milwaukee’,” he says. “The street has changed a lot from when my grandma and mom lived on Brady.”

The walk-up window and lack of interior seating are an attempt to mimic the style of food trucks since the trucks are prohibited in the area. “For Brady Street, it is very fairly priced,” he says. “It’s definitely fast food but it has more of a street-food feel.”

The family’s roots to the neighborhood came into play in the development of Hot Box. When Sivilotti bought the building in 2018, Roufus says the opportunity “kind of presented itself.” The Roufus brothers and their sister, along with Sivilotti and his sister, were very close growing up and remain so to this day. “We were all raised by my grandmother in the same house,” Roufus says. “He’s my cousin, but we’re pretty much like brothers.”

As Urban Milwaukee’s Michael Horne wrote at the time, Sivilotti’s original plans for the building included a 24-hour coffee shop and diner, a beer garden and cafe with an outdoor deck and a walk-up window “for butter burger purchase in clement weather.”

Now, over a year later, the plans have changed a bit. Those who visited Hybrid Lounge before it closed might remember that the space had two bar areas. One bar was located on the north side of the building, bordering mostly E. Brady St., while a connecting bar area faced N. Van Buren St. Roufus says Sivilotti plans to open a tavern rather than a beer garden and cafe on the Brady St. side of the building. And in the space that faces Van Buren St., Sivilotti aims to open a cafe comparable to Jo’s Cafe (3519 W. Silver Spring Dr.) and George Webb‘s.

Inside the building, Hot Box will only occupy the kitchen. The walk-up window will be located at the back of the building on the Brady St. side. A vent for the hood faces the exterior of the building and is visible from the street. Roufus says that the window will be located “a little to the right” of the vent. The brothers have been working with Thomas Vavra to design the space. Vavra, who owns Vavra Design LLC, has also worked on spaces like Up-Down MKE (615 E. Brady St.) and Goodkind (2457 S. Wentworth Ave.).

Roufus says Hot Box has received a tentative “go-ahead” from the Brady Street Area Association, but still needs approval from the Milwaukee Common Council. If approved, Hot Box will hopefully be up and running by mid-August.

Former owners Nate Fried and Bill Lison opened Hybrid Lounge as a gay bar in 2010. The bar eventually closed in 2017.

According to the application, Hot Box will be open 4 p.m. to 12 a.m. Sunday and Tuesday to Thursday, along with 4 p.m. to 2 a.m. Friday and Saturday. The eatery will be closed Monday.