But Assembly Minority Leader Hintz seeks reelection to his post.

By Melanie Conklin, Wisconsin Examiner - Apr 25th, 2020 03:49 pm
Get a daily rundown of the top stories on Urban Milwaukee 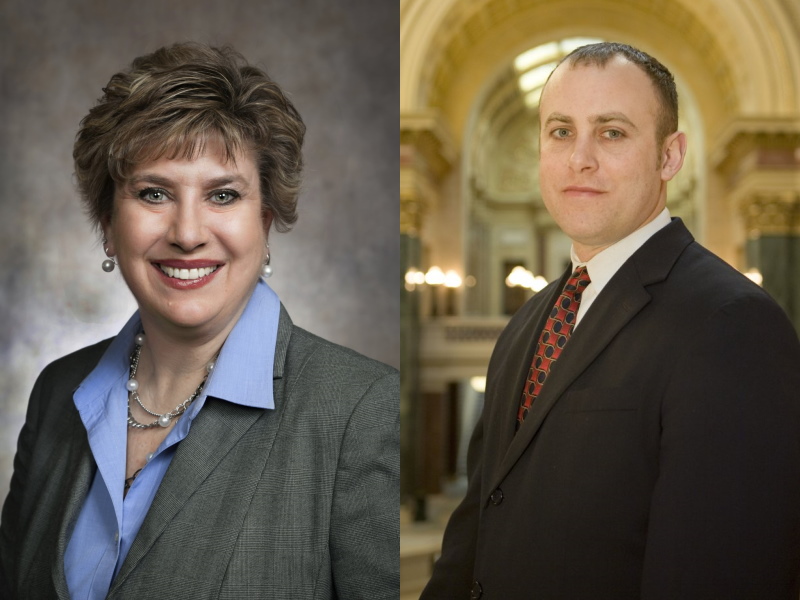 Jennifer Shilling and Gordon Hintz. Photos from the State of Wisconsin.

Today, Assembly Minority Leader Gordon Hintz (D-Oshkosh) announced that he will be running for re-election. After a string of announcements from Democrats that they are stepping down, his plan to run is noteworthy.

It has not been an easy time to be a Democrat in the Legislature. Their signature issue of expanding Medicaid to bring in more federal dollars and cover more people has been  repeatedly rejected by Republicans. Debates over the budget, gun safety, school funding and aid for farmers, among other issues have devolved into power struggles between legislative Republicans looking to limit the power of Gov. Tony Evers and the Democratic administration. Plus gerrymandering that favors Republicans has resulted in dramatic under-representation for Democrats. The map is so skewed that when Gov. Scott Walker lost his re-election bid, statewide, in 2018 he still won 63 of the state’s 99 Assembly districts.

Democrats in the state Senate are meeting Wednesday to talk about leadership roles, as Senate Minority Leader Jennifer Shilling, who is not running for re-election in the fall, is  stepping down from leadership as of Friday. She became leader in 2015 and has been the longest serving female legislative leader in Wisconsin history, according to her office.

“Given my recent announcement of non-candidacy, I believe new leadership in our caucus at this time will help to best represent our constituents and put Democrats in the best position to be successful in the months and years to come,” said Shilling in a statement. “With that in mind, I plan to step down from my position as Senate Democratic Leader on Friday, April 24th and continue to serve as the Senator for the 32nd District.”

Bets for her replacement are on Sen. Janet Bewley (D-Mason) who currently serves as assistant minority leader. Joseph Hoey, her chief of staff, says no decision has been made, but she “is talking to her colleagues about how to best move forward.” Other senators may also be interested in the post.

Senate Democrats were caucusing and having discussions on Wednesday via phone, and Shilling’s spokeswoman Kate Constalie said she expects an announcement by the end of the week.

Whomever is chosen as leader will serve only until after the November elections, say Senate staff. There will be a very different group of Democratic state senators in the fall, due to departures — and potentially elections. Senate Democratic veterans who have announced they are not running for re-election include Sens. Fred Risser (D-Madison), Mark Miller (D-Monona) and Dave Hansen (D-Green Bay). Currently the Democrats hold 14 out of 33 seats.

In announcing his retirement after nearly 22 years serving between the Assembly and the Senate, Sen. Mark Miller said he will miss the job, but was disheartened by ramped up, winner-takes-all partisanship and rancor.

In the Assembly, among Democrats, Rep. Jason Fields (D-Milwaukee) announced Tuesday he would not be running for reelection, as has Rep. Chris Taylor (D-Madison) and Rep. Debra Kolste (D-Janesville). Rep. Melissa Sargent (D-Madison) is running for the Senate.

So there may have been a sigh of relief among Democrats when Hintz put out his statement on Wednesday.

“Today, I am excited to announce I will be seeking another term in the State Assembly,” wrote Hintz, who was first elected to the Assembly in 2006. He was one of the two Democratic legislators to serve on the powerful Joint Finance Committee until he became the Democratic leader in 2017.

Key issues for Hintz have included health care, regulating predatory pay-day lenders and budgets. (Several decades ago, he worked as a budget analysis for the City of Long Beach, which was around the same time he finished second in the 2003 U.S. Air Guitar National Championships under the stage name of “Krye Tuff.”)

“In the midst of a public health and economic crisis, we need experienced leadership in the State Assembly,” Hintz said in his statement on running again. “I am confident my time in public service has prepared me to help find solutions to address the challenges brought on by COVID-19.”