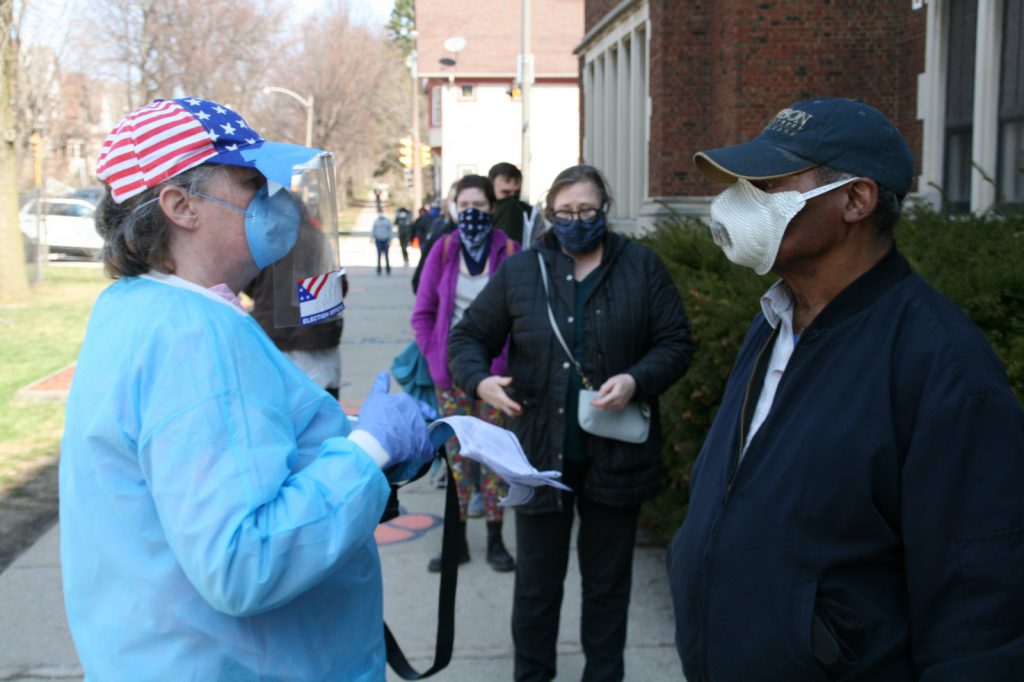 An election worker confirms the registration of a voter outside Riverside High School during the April 7th Spring Election. Photo by Jeramey Jannene.

We’re two weeks from the April 7th Spring Election, beyond the 14-day asymptomatic window for those infected with COVID-19, and public health officials are starting to assemble a picture of how many people contracted the disease after voting in-person or working at the polls.

The Milwaukee Health Department has confirmed seven cases connected to the election, but notes that it won’t have a clear sense of the total number until later in the week. Six of the individuals voted, while one served as a poll worker.

“Please note that as of April 20th, we only have 30 percent of the investigation data from new cases which indicated participation in election activity,” said Milwaukee Health Commissioner Jeanette Kowalik. The day after the election the state added a question about election participation to its questionnaire given to those that test positive for COVID-19. Kowalik promised the city would issue a formal report.

Over 18,800 Milwaukeeans voted in person and over 400 people worked at the city’s five polling sites. Some voters spent over two hours in line waiting to vote. More than 400,000 Wisconsin residents voted in person in the controversial election.

But the true extent of the spread of COVID-19 related to the election will likely never be known. Despite revised state guidance to test anyone that would benefit from a diagnosis, individuals still report difficulty accessing tests and others have symptoms so mild they never seek medical assistance. The number of people tested for COVID-19 has not surged after the election.

The Milwaukee Common Council does not want a repeat of the situation in November. A new program would mail absentee ballot request forms and a posted-page return envelope to all registered voters in the city.

The proposal, adopted unanimously by the Milwaukee Common Council Tuesday morning without discussion, is the first piece of legislation authored by newly-elected council member Marina Dimitrijevic.

“The world watched as Milwaukee voters and poll workers wore masks and practiced social distancing to protect the health of our City for an in-person vote that was dangerous, ill-advised and – as one voter noted in a now viral protest sign – ridiculous,” said Dimitrijevic in a statement. Approximately 76,000 Milwaukeeans voted absentee in the last election, including those that voted early.

Approximately 296,000 Milwaukee residents would receive the letter, allowing them to return to register for an absentee ballot. The ballot would then arrive in advance of the election, hopefully avoiding timing issues that plagued the April 7th election.

The proposal would not avoid the state law requiring a valid photo identification document. Those with valid IDs on file with the state would not need to submit another copy, including the tens of thousands of Milwaukeeans who requested a ballot via the state’s My Vote WI website for the spring election. But others may need to submit a copy of their ID alongside the letter or use the My Vote WI website to upload an absentee request digitally.

The Milwaukee Election Commission has 30 days to design the proposal and report back to the Common Council. The program does not have an estimated cost associated with it.

“The spectacle of thousands of citizens gathering to vote on April 7, while in a way inspiring, was an unacceptable danger to their own well-being and that of others,” said Rainey in a statement.

Alderwoman Coggs has requested the council’s Inspector General investigate the absentee ballot process and what happened with the last election.  “We need to strengthen our absentee voting process for residents and make sure we do not have a repeat of the same issues this fall,” she said.

The Milwaukee Election Commission has also requested the United States Postal Service investigate what might have happened to 7,814 ballots mailed on March 22nd and 23rd that were apparently lost.