By Corri Hess, Wisconsin Public Radio - Apr 9th, 2020 09:56 am
Get a daily rundown of the top stories on Urban Milwaukee 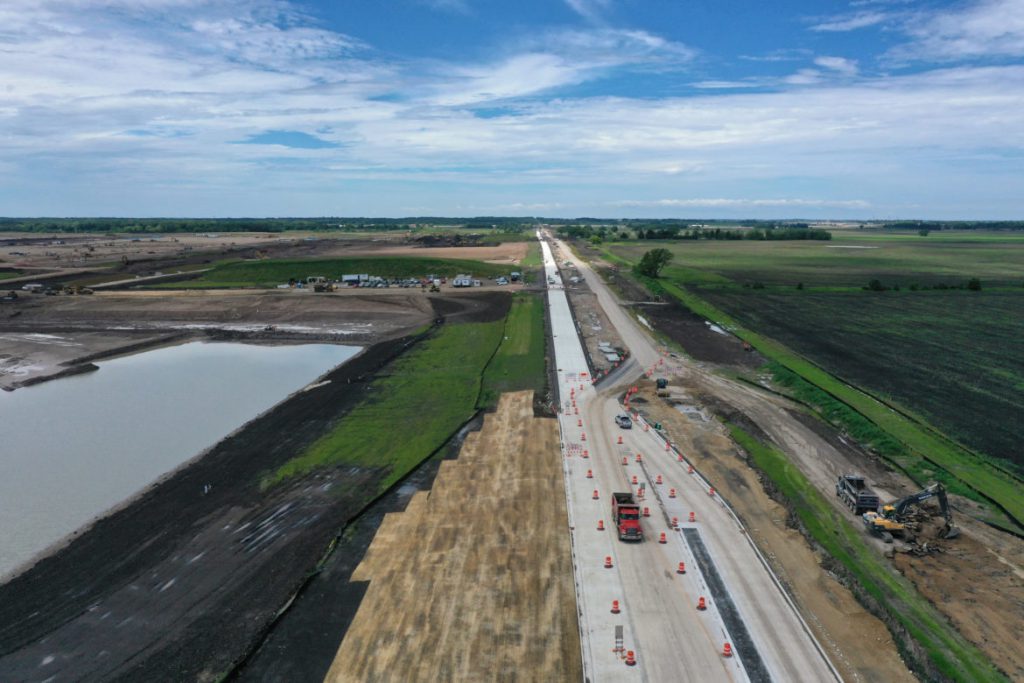 The Foxconn site along Braun Road, in Mount Pleasant, Wis., is seen under construction on July 1, 2019. File photo by Coburn Dukehart/Wisconsin Watch.

Foxconn officials say they have invested “hundreds of millions” of dollars in the development of the Wisconn Valley Science and Technology Park in Racine County and have met the state’s pay-for-performance criteria, according to an open records request from Wisconsin Public Radio.

“Foxconn directly employed 600 individuals, with more than 550 meeting the criterial for qualifications as full-time employees,” Jay Lee, board member and vice chairman of Foxconn Technology Group wrote to Wisconsin Economic Development Corp. (WEDC) Secretary Missy Hughes. “Alongside our local partners, we have built a strong foundation for the Wisconsin project, and set the stage for Wisconn Valley to be the center of a high-technology hub for North America.

Foxconn had to create a minimum of 520 jobs in 2019 to be eligible for state tax credits. The company had until April 1 to report the number of jobs it created last year.

Still, it’s unlikely the company will receive the job credits.

In November 2019, a series of letters between the state Department of Administration, WEDC and Foxconn showed the group at odds over what qualified for tax incentives.

When the original contract was signed in 2017, Foxconn promised to build a 22-million-square-foot Gen 10.5 plant. Those plans have repeatedly changed.

Foxconn is now building a smaller plant and has also created another entity, Foxconn International Internet (Fii) that is not mentioned in the contract.

“Foxconn was opaque about its project plans throughout 2018 and did not commit to any specific type of project different than the Gen 10.5 facility defined in the contract,” DOA Secretary Joel Brennan wrote in a letter dated Nov. 22, 2019.

State officials said late last year tax credits would not be awarded until the contract is amended. That has not yet taken place.

Foxconn officials did not respond to request for comment.

“WEDC will then review the company’s project performance report, supporting workbooks and other documents, and the independent auditor’s report, a process that is likely to take several months,” Hughes said. “Our conversations with Foxconn about aligning the contract with the project continue — it is WEDC’s objective to do so in order to support the project.”

Foxconn is also eligible for tax credits for making “significant” capital investments from 2019 through 2025 if WEDC determines the company made those investments in a designated zone in Racine County.

An estimate released in January by the Legislature’s nonpartisan budget office determined Foxconn would have “sufficient payroll and capital expenditures by the end of the 2019 calendar year to receive the $212 million of refundable credits that would be paid in the 2020-21 fiscal year.”

Based on reports of the project’s progress to date, and assumptions regarding payroll and capital expenditures, it is more likely that credits paid to Foxconn in 2020-21 will be in the range of $50 million to $75 million, the Legislative Fiscal Bureau report found.

Hintz, who is on the WEDC board, said the state needs the extra budget money to take care of people during the public health crisis.

“The reality is the state gets its resources from income tax, sales tax and income tax and all of these are down and there is going to be more demand for state services which is going to make expenses go up,” Hintz said. “We’re in a better place for this recession than we were in the past, but that may get eaten up pretty quickly depending on how long the economy is impacted.”

Foxconn Officials Say They Have Met Job Goals For 2019 was originally published by Wisconsin Public Radio.