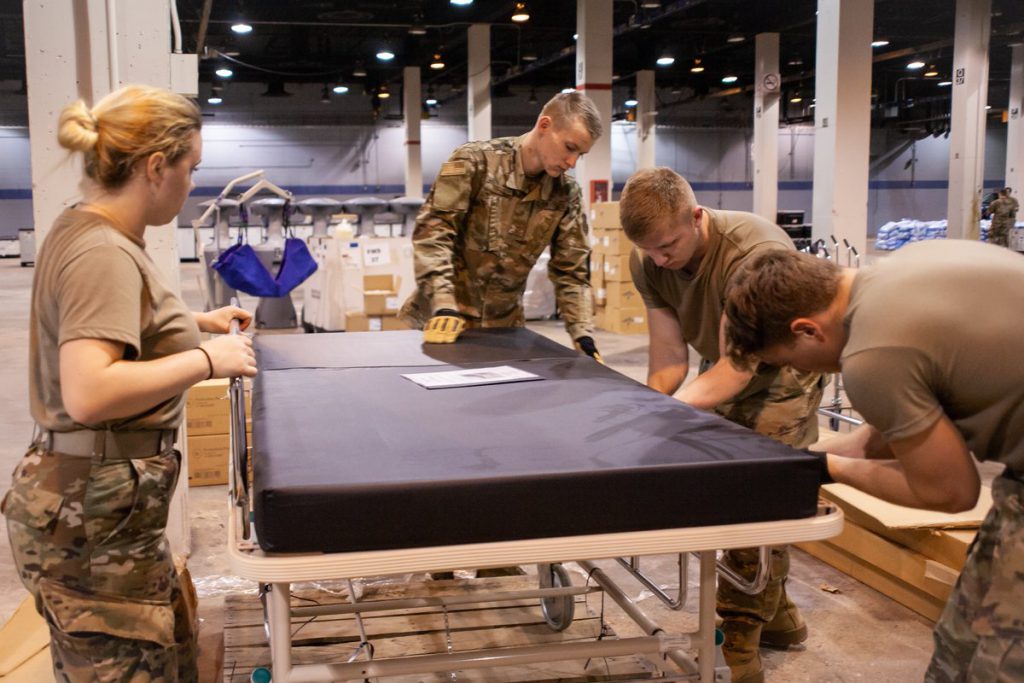 Local leaders have selected the Wisconsin State Fair Park Exposition Center as the first location where an alternative care facility will be built out. The move is intended to provide extra hospital bed capacity to deal with an expected surge in COVID-19 cases.

The Wisconsin Center and the State Fair Park locations were studied earlier this week as potential facilities for additional healthcare capacity. But the Wisconsin District Center will only be used in the event that the surge is greater than predicted and the state fair park facility fills up.

Dr. Ben Weston told the press during a briefing Thursday that the State Fair Park facility is “an optimal location for this space considering the ease of access, abundant parking, central location to a variety of resources.”

John Yingling, chair of the State Fair Park Board of Directors, said the park and its staff are ready to serve if needed. “And we are looking to make sure that we are operational as quickly as possible to provide services that we hope are never needed,” he said.

The City of Milwaukee and Milwaukee County are calling upon the state to request assistance from the Army Corps of Engineers to build out additional bed capacity at the exposition center. Local leaders say this is a proactive move. They want the facility ready if it’s needed, but all hope it is not.

“If we didn’t move at this speed… we may not have enough time,” Mayor Tom Barrett said. A model from Weston estimates the facility could be necessary within 10 to 21 days.

“This is really about being proactive and taking a regional approach,” said West Allis Mayor Dan Devine. The expo center is in the West Allis portion of the park.

Using information about hospital bed and resource capacity along with modeling of how the illness may affect the community, local leaders felt they had to do this. “We want to avoid a situation where we decide we need this facility too late, where we already have patients in need,” Weston said.

“We owe the people we all serve to shoot for the best outcome but be prepared for the worst,” said Milwaukee County Executive Chris Abele.

Wisconsin Center District CEO Marty Brooks said the convention center was being evaluated for its ability to hold 1,200 beds for patients with mild symptoms. Cloth dividers are being used in Chicago to separate beds. Individuals requiring serious medical care would be transported to a hospital.

“Even the largest and most efficient hospital systems at times may require further support outside of their four walls,” Weston said.

On top of that the rates of infection in certain parts of the county, combined with the likeliness of a surge this month, have local leaders and health officials concerned. Right now, the number of confirmed cases comes to about 100 per 100,000 residents. But in some areas, specifically the central and northern parts of the City of Milwaukee, there are close to 250 confirmed cases per 100,000 residents. “It’s concerning because it’s similar to where cities such as New York were less than a week ago,” Weston said.

The state opened a smaller isolation facility in a Super 8 hotel near Milwaukee Mitchell International Airport this week. The City of Milwaukee partnered with the Archdiocese of Milwaukee and the City of St. Francis on a similar facility on the Saint Francis de Sales Seminary campus.