Milwaukee Will Cut Down 900 of Its Ash Trees 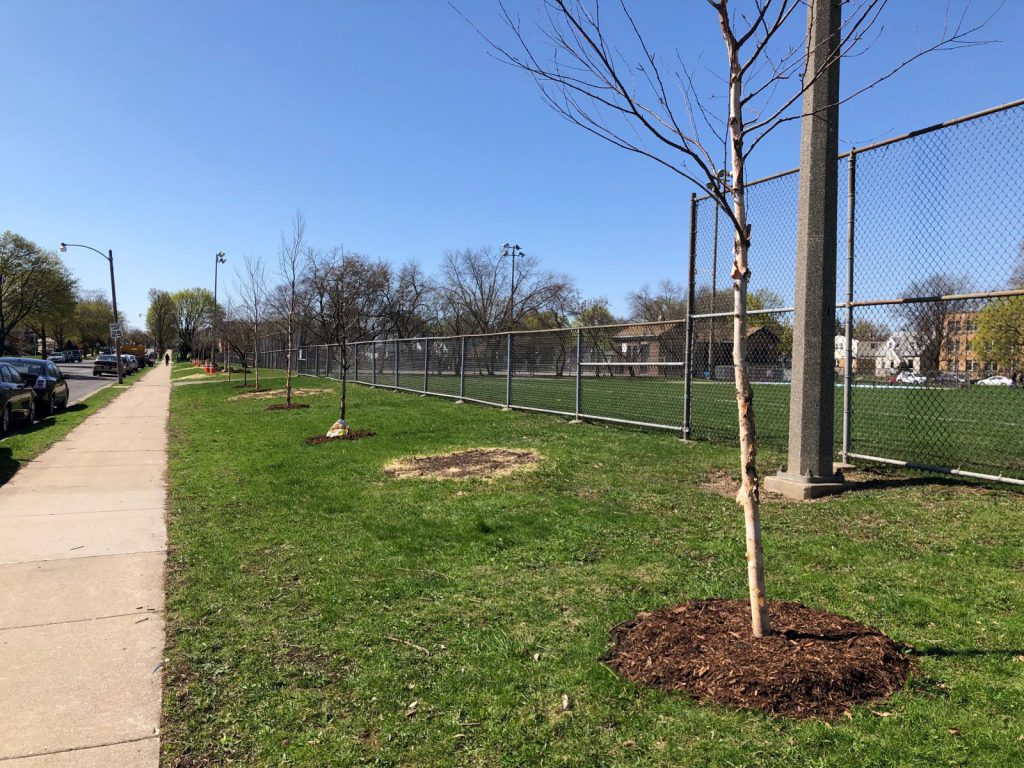 Replacement trees at Ohio Playfield for those lost to emerald ash border. Photo by Jeramey Jannene.

A $200,000 federal grant will fund the removal and replacement of approximately 900 ash trees on Milwaukee streets over the next two years.

The Great Lakes Restoration Initiative grant from the United States Department of Agriculture will help the city’s effort to fight the invasive emerald ash borer that has spread throughout North America and killed millions of trees.

The funding, which requires a $50,000 local match, will allow the city to selectively replace the worst of the 28,000 Ash trees in the city’s approximately 200,000 street tree inventory.

Department of Public Works (DPW) environmental policy analyst Kimberly Kujoth told members of the Public Works Committee Wednesday that the city would replace the trees with a variety of species. This follows a long-standing practice intended to avoid wholesale clearance in the future given the successive waves of diseases and bugs in recent years.

“What do you plan to do with the 900 trees?” asked Alderman Michael Murphy. “All of the removals that the city does, the wood does get utilized,” said Kujoth.

Depending on its condition it ends up in a variety of places. Wudeward Urban Forest Products has used it to create a variety of products including concession stands in Fiserv Forum and shelving for high-end apartments in the Historic Third Ward. Other fallen trees, of which there are thousands annually, end up becoming firewood or woodchips.

“It’s just extremely sad looking at what happened to trees throughout the state,” said Murphy. He suggested the department consider metasequoia (dawn redwood) trees as one of the replacements. “They seem to be a very hearty tree.”

“It’ll be a mix of trees that do well in urban environments,” said Kujoth. “We don’t have a specific plan yet. By the time we are planting it is a year or two out.”

Ald. Mark Borkowski expressed concern that trees weren’t being replaced one-for-one. “I realize we got a zillion trees, but it’s noticeable” said the south side alderman of the loss of trees. Referencing the county-owned Jackson Park, Borkowski added: “It looks like they’re strip mining that park.”

Alderman Cavalier Johnson, who serves on the Milwaukee Metropolitan Sewerage District board, said Jackson Park might look bad at the moment because the district is engaged in a flood abatement project that has removed a number of trees in the short term. But other large county parks have also lost a number of trees, Humboldt Park Friends launched a campaign last year to plant 100 trees in the Bay View park.

The grant also funds the construction of gravel beds at each of the city’s three forestry yards. “Holding bare root trees harvested in spring for 4-6 months in gravel beds allow for further development of fine root mass which leads to improved transplant success in fall planting,” reads the city’s grant report.

The first case of EAB was detected in Milwaukee in 2012. The city has a database of approximately 15,000 properties that have ash trees.

The committee unanimously voted to accept the grant. DPW will provide the $50,000 match in-kind with staff time.