By Rob Mentzer, Wisconsin Public Radio - Mar 10th, 2020 01:03 pm
Get a daily rundown of the top stories on Urban Milwaukee 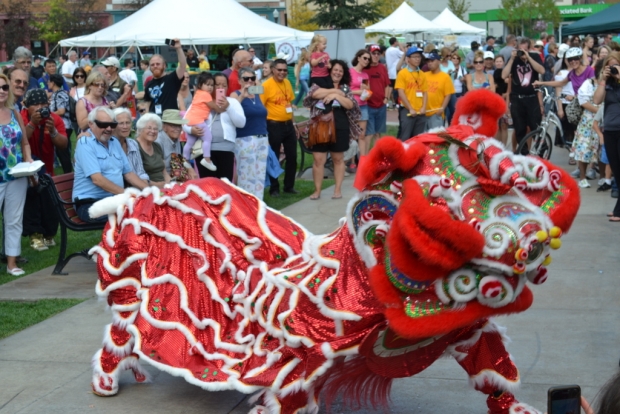 Visitors to the first International Wisconsin Ginseng Festival are welcomed to downtown Wausau by the traditional Chinese lion dance. Photo by Glen Moberg/WPR.

Organizers on Monday announced the postponement of the International Wisconsin Ginseng Festival, the first major event cancellation in Wisconsin as a result of concerns about the spread of COVID-19.

Barrett said travel restrictions were the major reason for the postponement of the festival, which would have been held in September.

“As of right now, there are restrictions on who can travel and who cannot,” he said. “That makes it hard for anybody who wants to plan ahead.”

The cancellation came during a turbulent day in financial markets that saw stocks plummet amid fears the spread of the disease will cause a recession. It was among the most high-profile effects to date in Wisconsin of the spreading disease, which has killed more than 3,800 people worldwide and sickened more than 110,000.

Barrett said the postponement will mean a loss of between $2 million and $3 million in economic impact from the festival, which was first held in 2018. The convention bureau will try to expand sports events to compensate for the loss, and is considering a separate December event for ginseng buyers.

Wisconsin banks are already feeling the impacts of coronavirus anxieties.

“When they most recently lowered rates it already started to cause banks to see a huge increase in the volume applications for either brand new loans or refinances with most of the business being refinance business,” said Oswald Poels.

“These rate cuts have definitely put greater pressure on the net interest margin that banks are getting and that is basically the profit that they make. So, it is definitely putting a strain on the profitability of a bank,” said Oswald Poels.

Elsewhere in Wisconsin, industries are making plans to respond to the virus itself as well as the economic turmoil and uncertainty it has unleashed.

For example, there have been no cancellations of upcoming events at Madison’s Alliant Energy Center, said interim executive director Sharon Corrigan, but plenty of questions from potential guests and customers renting the facility have come in.

“Obviously we are following (Centers for Disease Control and Prevention) recommendations very closely and making sure we’re ready to respond,” Corrigan said. “The (events) industry is trying to get ahead of this by making sure we continue to have shows where there aren’t recommendations to not meet, so the economic activity that can happen in this country does happen.”

The current risk to Wisconsinites of contracting the disease is considered very low, according to the state Department of Health Services.

But the uncertain environment has all sorts of industries planning and preparing for potential disruptions.

Brandon Scholz, president of the Wisconsin Grocers Association, said grocers are considering the potential long-term effects of a widespread outbreak. It’s unlikely that there would be any significant shortages of packaged foods or dry goods, but supply chains for perishables such as produce or meats could be disrupted. Grocers haven’t seen any of these effects yet, Scholz said, but the industry is making preparations, for example by planning to provide alternative products for federally subsidized food assistance programs.

The food supply chain for customers, Scholz said, is secure.

“One of the things people should be absolutely certain about is that their local grocer and the people they get their products from will do backflips to make sure what they’re putting on the shelf is safe,” Scholz said.

Wisconsin has had only one confirmed case of the disease, and according to public health officials the patient self-quarantined and recovered from the illness. However, 11 cases have been confirmed in the Chicago area; Milwaukee officials say they expect to see new cases rise, as have other health leaders in Wisconsin and elsewhere.

Also contributing to financial markets’ plunge Monday was a dispute between Russia and Saudi Arabia over oil production that has depressed global oil prices. In Wisconsin, that’s an unwelcome development for an already struggling frac sand mining industry in Wisconsin. Oil prices of around $34 per barrel on Monday will cause declines in domestic production.

Hassler said that will further depress prices for frac sand used in drilling for oil and natural gas. Many Wisconsin sand mines have been shut down since last year, but Hassler said the latest tumult will put more pressure on already suffering mines in Wisconsin and even those in Texas.