The Funky Fun of Little Feat

“Skin It Back” shows why so many musicians loved this band. 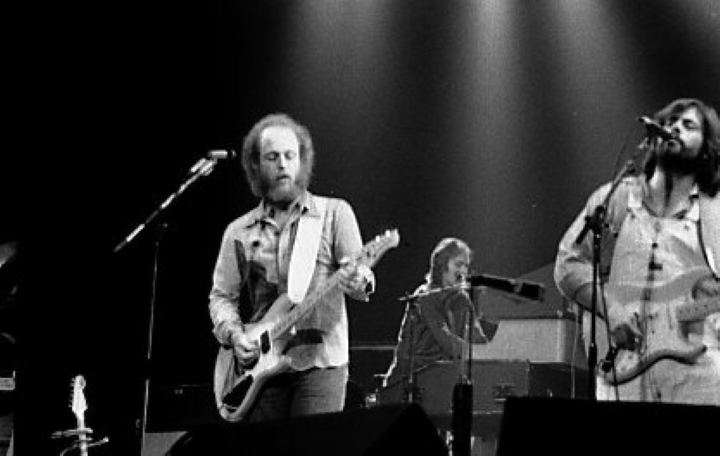 The story of Little Feat revolves around the leader, Lowell George. He died a rock star’s death at age 33, and a career that should have gone on for decades was cut short by drugs and alcohol. He and his band were a much needed bright spot in the 70’s. Their songs were witty and soulful in equal measure. They were played and sung by a band of brothers who knew just how to do it. Bonnie Raitt’s slide playing was influenced by George — like most, she considered him a master. Presently, any scoundrel (Including me) can slip a glass tube on their pinkie and fake a couple things, so it’s become a bit of a cliche — the calling card of a lot of white bluesmen.

More than a one trick pony, Lowell George would have been a standout without his guitar. He wowed the crowd with the grit and gravy that was always present in his voice. His songs benefited greatly from that expressive instrument. The casual surrealism in his lyrics pair perfectly the puzzling covers painter Neon Park cooked up for the band. George’s savviness in writing and delivering those backroom takes suggested a character you wouldn’t mind hanging out with and doing things you probably shouldn’t. Who could resist the temptations he sang about in Willing?

Many would rank Little Feat somewhere just south of The Band. Like them, there was no shortage of talent and both had the ability to do special things in more than a few American musical idioms. Their Venn diagram overlaps in New Orleans and their affection for maestro Allen Toussaint. Little Feat’s special take on his “On Your Way Down” is worthy and possibly even definitive.

So what do you do when your star player is taken out? As they say in sports, “Next man up.” In this case that was second guitarist and writer Paul Barrerre, who died last October. Lowell George had cast a shadow, but there was always more to Little Feat than their front man. They were early adopters of Funk and played it well. In “Skin It Back,” sung here by pianist Bill Payne, they show off their top notch rhythm section and give this song a serious workout.

Well I’m waitin’ for something to take place
Something to take me away from this race
‘Round city to city, town to town
Runnin’ around in the shoes of a clown
And that desperate, no count, desperado
A depot of love, my business is the street
I be shakin’ ’em down, oh Colorado
Texas she’s nice but Georgia’s oh so sweet
Steal away with me darlin’, your lovin’ just can’t be beat
So it seems that the world keeps on turnin’ but so what
I don’t doubt it, it just keeps on the move
You’re a dream and that’s all that I ask for
So well now, I’m wonderin’ just how I’m gonna tell it to you
Skin it back (skin it back)

The nasty riff that kicks it off is all Barrere. He had been playing blues, a lot of slide for that matter, before Little Feat, and after George’s death he took it up again. The idea of Little Feat remained workable and the band went forward with a series of lead singers. While they didn’t quite measure up to George’s impossibly high standards, they could rely on the strength of the material and loyalty of fans to keep it going until Barrere’s death.Their reputation today probably suffers from the lack of a bonafide hit, but among musicians and others who dive a bit deeper than the Top 40, they were the real medicine.

Barrere spent time in Milwaukee in early 2013 to work on Greg Koch’s record, “Plays Well With Others.” I’ll be talking to and playing with Greg, the manic maestro of all things guitar, about our mutual songwriting influences, including Little Feat, at the next Sieger On Songs: Conversations, Thursday, March 12, 7 p.m. at the Jazz Gallery Center for the Arts, 926 E. Center St.