By Miranda Suarez, Wisconsin Public Radio - Mar 7th, 2020 01:17 pm
Get a daily rundown of the top stories on Urban Milwaukee 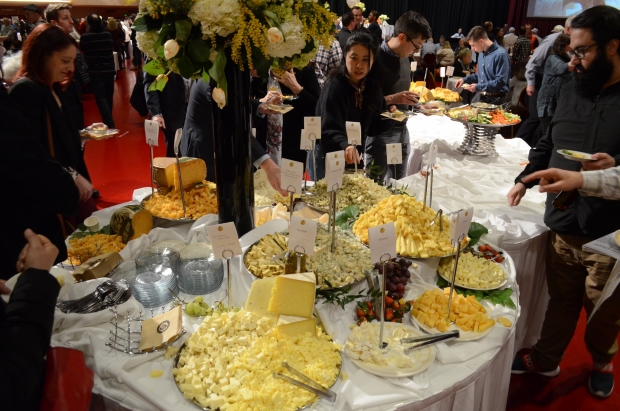 A table full of cheese at the 2020 World Championship Cheese Contest in Madison on Mar. 5, 2020. Photo by Miranda Suarez/WPR.

A Gruyere cheese from Switzerland took home the grand prize at the World Championship Cheese Contest in Madison on Thursday.

More than 3,600 entries from around the world were whittled down to 20 finalists over three days of competition. Three Wisconsin cheeses made it to the final round: the English Hollow Cheddar from Maple Leaf Cheese, the Marieke Gouda Smoked Cumin from Marieke Gouda, and the Roth Gorgonzola Cheese from Emmi Roth.

Emmi Roth won the grand prize in 2016, breaking a 28-year drought for U.S. cheeses. Tim Omer, Emmi Roth’s managing director, said the competition has only gotten tougher since then.

Maple Leaf Cheese of Monroe is working to perfect its English Hollow Cheddar. Cheesemaker Billy Knox described the flavor as a “boom on your tongue.” He said he’s proud to represent his city, where even the high school sports teams are called the Cheesemakers.

“When you’re a kid, you don’t necessarily think that’s cool, and then you get older, and you get to take part in what is the Super Bowl, the World Series of cheese,” Knox said.

The competition is so big that it can boost business, said Marieke Penterman of Marieke Gouda. That’s why she usually enters around 25 to 30 cheese wheels.

“Nothing beats the marketing, the advertising, the branding of our brand with this competition, so it’s priceless,” Penterman said.

This year’s world champion cheese, the Gruyere from Switzerland, was made by Michael Spycher, who also won with his Gruyere in 2008.

Wisconsin cheeses have won 11 titles since the contest began in 1957.

Although it didn’t take home the grand prize this year, Wisconsin still won more than any other state, taking home 45 gold medals. Vermont cheesemakers came in second with nine.

Wisconsin producers also swept some categories, including the cheese curd contest — although it only had two entries from out-of-state.