By Corri Hess, Wisconsin Public Radio - Feb 26th, 2020 02:15 pm
Get a daily rundown of the top stories on Urban Milwaukee 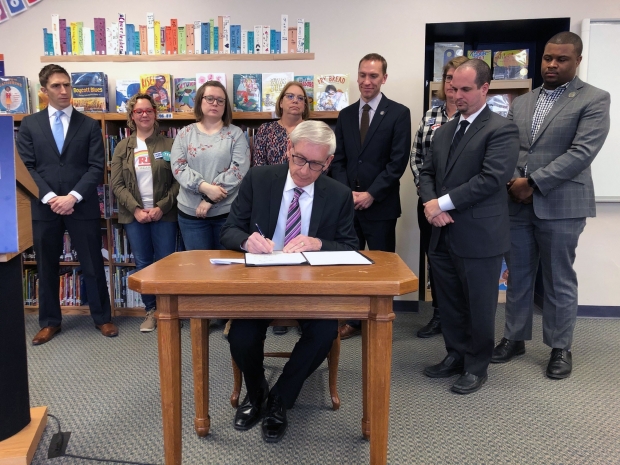 Republicans in the Senate and Assembly passed the $248 million ongoing income tax cut Thursday. The overall bill would have cost the state $392 million in the next budget.

It would have also included about $45 million to offset a new property tax cut for manufacturing businesses and $100 million for a one-time payment on state debt.

“I know Republicans in the Legislature don’t want to have to explain to their constituents why they don’t support our schools or reduce property taxes,” Evers said. “The good news is, there is still time to do the right thing. It’s time for the Republicans to put politics aside, so we can do what’s right for our kids, our schools and of course our property tax payers.”

The GOP bill would have spent down a projected surplus in Wisconsin’s budget brought about by an estimated $818 million increase in tax collections.

Evers has been saying for weeks he wanted to use the surplus on school funding.

In early February, he introduced a bill that would spend roughly $250 million on schools, with $130 million of that aimed at reducing property taxes through the state’s school aid formula.

The governor’s plan would have also restored the state’s commitment to funding two-thirds of the cost of education.

“We cannot continue to ignore the fact that for the past 10 years the state has been asleep on the job when it comes to fully funding our schools, and that folks across our state are seeing an increase in their property taxes,” Evers said. “It’s time for Republicans to put politics aside, and let’s work together to find a compromise that works for everyone.”

Senate Majority Leader Scott Fitzgerald, R-Juneau, could not immediately be reached for comment.

He told WPR in a previous interview that if Evers did veto the tax cut bill, the surplus money would likely remain in the state budget until next year.

“I don’t see anything happening until the next state budget,” Fitzgerald said last month. “So maybe that’s when the deal gets cut.”