The Return of John Shimon

Overcoming loss, with a new wife and artistic partner, Lauren Semivan. Quite a story. 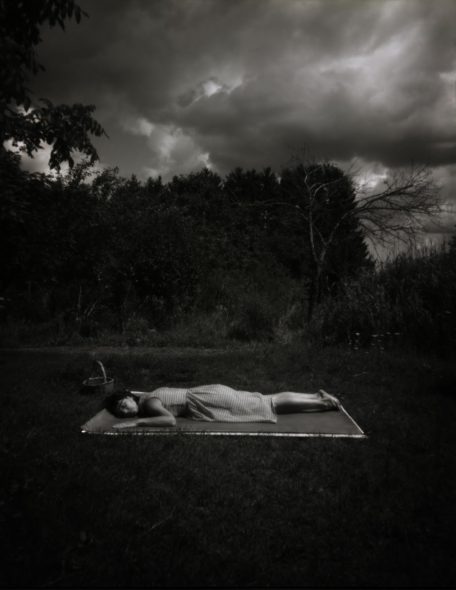 This is a story with a happy ending.

Many art followers in Wisconsin are familiar with the work of John Shimon and Julie Lindemann, the celebrated art couple who were marital and artistic partners functioning as one entity — Shimon and Lindemann —  throughout their 30 year professional careers.

Their work was mostly photography (with some mixed media) creating images of their own life and examining the lives of the friends and  inhabitants of rural Wisconsin. They celebrated nature, manual labor and fashion.

Sounds like a wacky mix but they were precursors of the DIY sensibility of millennials today. Yet they were also academics and shared a joint position at Lawrence University for years teaching photography and running that department.

After Julie Lindemann died of cancer in 2015, John Shimon took several years to get back on his feet, both personally and professionally. He didn’t move on but he did move forward.

Evidence of his former work with Lindemann still pervades his current art but it also moves in different directions and again with a married partner, his second wife, Lauren Semivan. The two now work collaboratively, but also independently at times and the result is a wonderful testament to the life force of art, how the process of creating can be healing, helping you embrace change and evolve as a person.

You might say the show features several bodies of work.

The first room is the work of Semivan, originally from Detroit, who is an established artist independent of Shimon with photography in several museum collections and galleries in New York and Detroit.

I was immediately drawn to these large semi-abstract prints for their cinematic and narrative qualities. They draw the viewer in through their sense of space, at once shallow but complex, the luscious tones of black and white and the surprise of recognizable traditional still life objects.

The images are silver gelatin prints, the old-fashioned chemicals in the darkroom kind of photography. No digital/computer work here.

The images are both a deconstruction of photographic space and a reinforcement of it. They are “staged” in the sense of composing with light, shapes and objects. There is a retro quality, too, which is very much in the aesthetic of Shimon and Lindemann’s work. But the interpretation is very different.

As Paul Salsieder of Portrait Society notes, the show’s name, “Tangency” refers to the word “tangential” and the work of Shimon and Semivan is about “different approaches to documenting the same moment”.

Both artists’ work is time sensitive, but Shimon’s is grounded (as it has been for many years) in the historical processes of photography. It’s much more material based though both artists do not present digital photos.

The collaborative work by Shimon and Semivan includes several life size cyanotypes. These are much like the “sun prints” used by children to make cool easy photograms out doors or in bright light. The photo is treated with a chemical which makes it light sensitive and then objects are placed on the paper and left to develop in the light.

In this case the objects placed on the paper are the artist themselves, lying on a specially constructed frame with the paper in it. These huge images have a dreamy, surreal quality.

On the opposite wall are pinhole photos and ambrotypes, an early photo process similar to daguerotype. These are very small works, delicate and sometimes quite dark, that evoke the Victorian era formality and preciousness but in a very contemporary way.  Indeed, they are used to document the process of creating those life-sized cyanotypes. Thus, we see the artists stretched out on their constructed life size easel in the backyard in rich but tiny black-and-white images and and look at the wall opposite and see the human-sized finished image.

There are also three very intriguing cyanotypes of vintage blouses, the image used for the card advertising this exhibit. These are sheer so the pattern dominates, but have the same ephemeral quality of the larger figurative photos.

These are also intensely personal as are all the images in this show.

These blouses were Julie Lindemann’s, who loved to wear vintage clothes, and Semivan, who has similar tastes, often wears some of those clothes, I’m told. 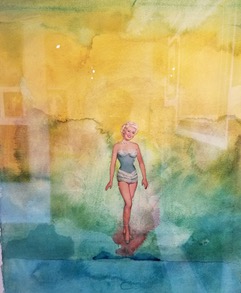 The show also includes a 16 mm film based on a performance in which John Cage and Robert Rauschenberg drove over a canvas and then used the canvas as an art piece. In Shimon’s tribute he drives his vintage Plymouth over a strip of photo paper.

There is a third room of paintings done by Shimon using vintage-y paper dolls set into large, often dark and scary-looking watercolor backgrounds. They also have a cinematic quality, kind of like early Sci-fi films with makeshift special effects and hand-painted backgrounds of Mars or some unknown planet. They do evoke alienation and possible destruction, but also have a playful quality which undercuts the darker message. All the work here is both provocative and fun.

In that same vein is the work in the “Project Space” outside the main gallery, by Marsha McDonald, who lives and works in Tokyo and Milwaukee. These photos are flower studies done at nightfall in gardens in Tokyo. They are strong black-and-white images with a repeated format of full frontal flowers in high contrast and extreme close-up. They are small squares arranged in various patterns across the wall. Crisp and yet contemplative, they are inviting little gems. 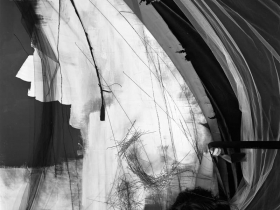 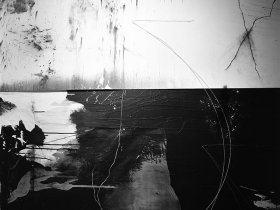 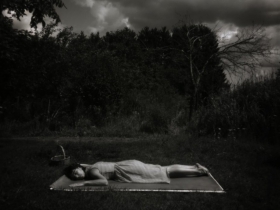