State GOP says they're not leaving.

By Corri Hess, Wisconsin Public Radio - Feb 20th, 2020 10:54 am
Get a daily rundown of the top stories on Urban Milwaukee 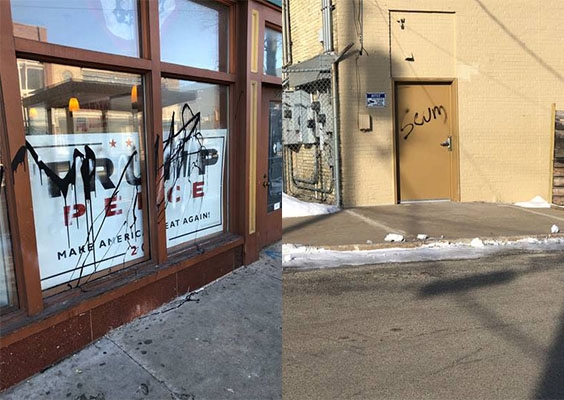 Less than two weeks after opening, the Republican Party of Wisconsin’s field office in Milwaukee’s Bronzeville neighborhood has been vandalized.

The Wisconsin GOP posted a video of the office, located on the southeast corner of North Avenue and Dr. Martin Luther King Drive, Wednesday afternoon on Twitter.

Our new field office in Milwaukee was vandalized last night. This won’t change our commitment to reaching voters in the community. What kind of intolerance can we expect to see when Democrats bring their convention to Milwaukee this summer? #LeadRight pic.twitter.com/sUXQKGAlLI

Its windows had been spray-painted overnight, according to the post.

“This won’t change our commitment to reaching voters in the community,” the post reads. “What kind of intolerance can we expect to see when Democrats bring their convention to Milwaukee this summer?”

The 2020 Democratic National Convention will be July 13-16 in Milwaukee.

At the time, Hitt said he hoped to keep the office open after the 2020 election.

On Wednesday, Hitt said the office is “long overdue,” for the Republican Party.

“We need to be here, in the Central City and in the black community,” Hitt said. “This is one step in a long journey of developing a relationship.”

Before the vandalism, the GOP was planning to install security cameras. Hitt said there is now a greater sense of urgency to install them, so if there is another instance of vandalism, perpetrators will be caught.

During an interview after the State of the City address last week, Alder Milele Coggs, a Democrat who represents Bronzeville, said many of her constituents questioned the office opening.

She posted the following on her Facebook page Feb. 6:

To be clear I DO NOT CONTROL who individual private property owners choose to lease space to on Dr. Martin Luther King Drive or anywhere else in the 6th District. I DO have the ability to vote or approve (along w/ my colleagues) things like liquor, food & public entertainment licenses for businesses. My door is always open to speak w/ and share ideas w/ property owners & business owners in the district so that together we continue to build the best King Drive in the nation & a district & city we all love.