How Can Music This Happy Be So Smart?

The Flat Five are coming to Anodyne Coffee. Here’s why you must go. 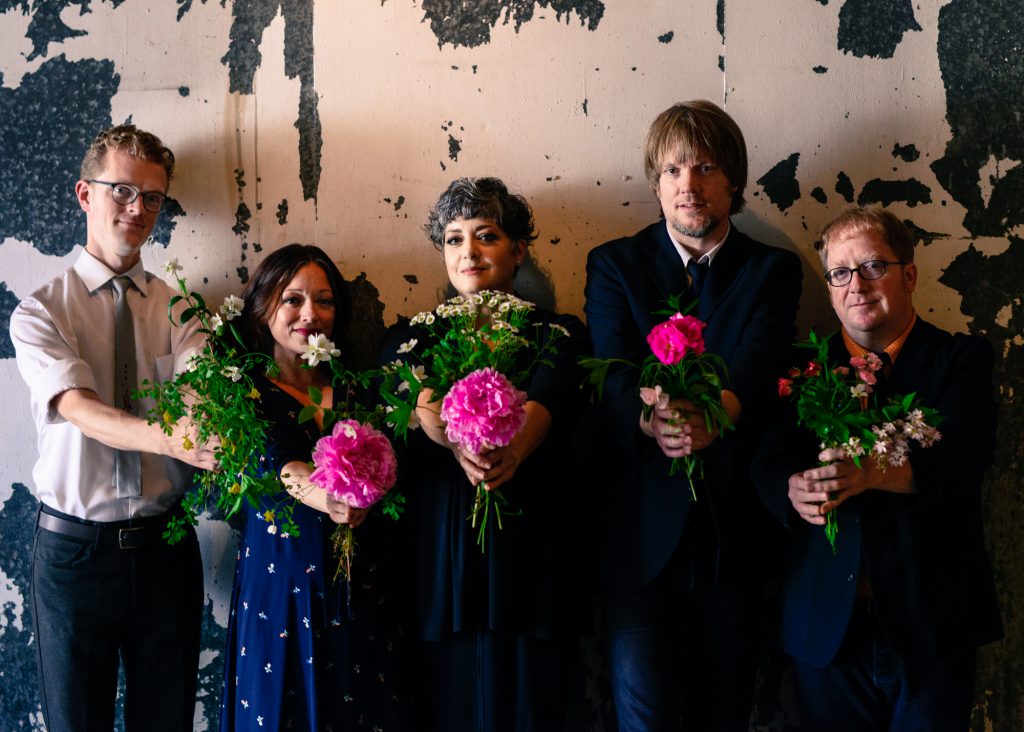 A lot of us are clinging to whatever brings us comfort in these dismal, anxiety-ridden times. For me it’s music, and while I continue to find refuge in the recordings and concerts of a dwindling number of working artists who have moved me for decades, my capacity to fall in love with new bands died somewhere around the turn of the century.

But then came the Flat Five, a Chicago quintet who over several recent performances and one stellar album have brought cranky, doom-laden old me to a state of utter delight.

You heard me: Delight. Have you been feeling delighted lately?

Well, the Flat Five are here to help.

A little bit jazz, a little bit pop, a whole lot of fizzy good cheer, the Flat Five have proudly made it their mission to play nothing but bright, expertly-performed confections that defy you to not surrender to their charms. No politics, no woe-is-me dirges. A willful sanctuary from the world outside.

Awash in harmonies that at times stack all five voices, their sound and their pop chops bring to mind the Mamas and the Papas, the Fifth Dimension, and other sunny acts from the more hopeful corner of the sixties. Their 2016 debut album boasts a set of original tunes that perfectly evoke the past while being downright subversive simply for their refusal to wallow in the cynicism and despair of the present. The album’s title – “It’s a World of Love and Hope” — is not meant to be snotty! Who are  these people?

In concert, it is the work of other artists that makes the Flat Five soar. They routinely cover the Monkees without a speck of hipster irony; they just really love the Monkees, and hope you do, too. Their deep well of influences is quite mad; one recent show boasted songs from such artists as Allen Toussaint, Captain Beefheart, Harry Nilsson, Joe South, the Beach Boys, and Vic Mizzy. Who is Vic Mizzy? Vic Mizzy wrote the theme song and incidental music for “The Addams Family.” The band played “Morticia’s Theme,” a dreamy instrumental interlude that you would recognize immediately if you watched “The Addams Family” as much as I did as a kid.

As working musicians, each member of the Flat Five has other groups or solo careers fighting for their time; keyboardist Scott Ligon and bass player Casey McDonough are fitting in spectacularly in the 21st century incarnation of the venerable NRBQ, and singer Kelly Hogan records and tours with the Decemberists and Neko Case, among others.

So busy are the Flat Five that they are able to come together only intermittently to be the Flat Five, and then it’s usually for a handful of shows in Chicago. Milwaukee dates, including an upcoming show at Anodyne Coffee on February 28, never come with a promise of when they’ll be back. And there you’ll sit, undelighted.

See them live. Buy their album. Either way, to these ears, passing up what the Flat Five have to offer would be flat wrong.

Tom Matthews’s novel Raising The Dad was published by St. Martin’s Press in 2018.