NRBQ comes back to Milwaukee, with newer members but the same great spirit. 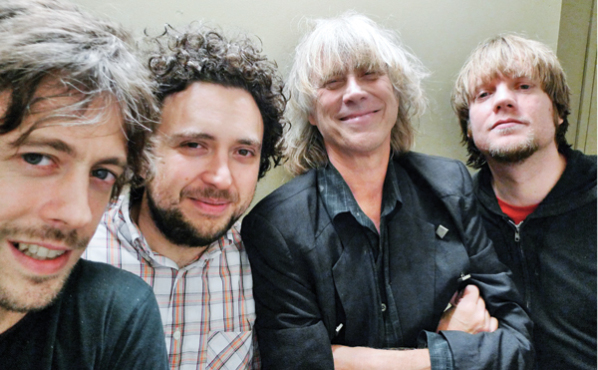 At about 37 minutes into The Beatles’s A Hard Day’s Night, I maintain that a death occurs. It is the moment when John, Paul, George and Ringo escape from the television studio that confined them for an antic romp on an empty field. To the tune of “Can’t Buy Me Love,” the lads indulge in boyish and purely innocent fun that would never be as endearingly portrayed again.

When this sequence was filmed in the spring of 1964, The Beatles were no longer boys and hardly innocent. But while their pre-fame apprenticeships in the red light district of Hamburg, Germany, had schooled them in sex and drugs (mostly amphetamines), the genuine playfulness in the film captures the final moments in the band’s sunny and sweet rise. Before fame began to sour them on their success and each other, and new influences started to define “band chemistry.”

Beatle lore tells us that four months after playing in that field in the spring of ‘64, Bob Dylan introduced the band to pot. By the time Help!, their lesser second movie, premiered in July, 1965, John and George had been secretly dosed with LSD by the band’s dentist. From that point forward, Beatle music would be darker, richer, more adventurous, sometimes downright weird, while the players became increasingly glassy-eyed, hairy and glum.

What it would never really be again was just plain fun. Kids-cutting-up-on-the-playground fun.

Which brings me to NRBQ, a band that has rocked beyond your radar for over 50 years.

With early roots dating back to practically the release of A Hard Days Night, the New Rhythm & Blues Quartet is a testament to the interminable toil and occasional triumphs of the working, just-getting-by rock band. Confined almost exclusively to playing bars, NRBQ in its prime delivered a joyous cacophony of achingly fine pop, gut-bucket rock and roll, and an oddball assortment of covers ranging from TV theme songs to bebop mind-blower Sun Ra to Rodgers and Hammerstein. They proudly took the stage every night with no setlist prepared, and could be guaranteed to spontaneously launch into at least a couple obscurities that would be new to even the most hardcore fan.

While the definition of a cult act, A-list musicians like Elvis Costello, Keith Richards, the Replacements and R.E.M. swore their allegiance to NRBQ. Bonnie Raitt told me in an interview a few years ago that if she spots a Q t-shirt in a crowd, she’ll stop and say hello to anyone savvy enough to belong to the same exclusive club as her.

For those open to the primal joys of music played with honest abandon – and a prankish ambivalence toward note-perfect precision – the band was damned near kids-on-a- playground fun. Beginning in 1982, first in Southern California and then in Milwaukee, I never failed to see them when they came to town.

Then, following a Halloween 2004 gig at Shank Hall, it looked as if NRBQ had played its final show after over 35 years. Keyboardist Terry Adams stopped touring after that Milwaukee show to successfully battle cancer; drummer Tom Ardolino would not be so lucky. It wasn’t until 2011 that Adams announced that NRBQ would go on, with only himself as an original member.

I could not have been less enthusiastic. Adams’s madcap tendencies and more obtuse musical tastes were unimaginable without the sweet-smiling, pop-crooning counterbalance of founding bassist Joey Spampinato. The new New Rhythm & Blues Quartet felt like a sad attempt to wring whatever was left from a name that never mattered to all that many in the first place. I had moved on.

So then jump forward to October 2014, almost ten years to the day since my NRBQ played its final show, and the first time that the ersatz Q returned to Shank Hall. If not for the fact that the opening band was Semi-Twang, Milwaukee’s own rootsy rock biz survivors, there wasn’t much of a chance I was going to bother.

And then damned if NRBQ didn’t win me over all over again. Terry Adams, one of rock’s great eccentrics, had lost none of his kooky swagger in his mid-60s. And by surrounding himself with much younger players steeped in the vast pool of musical references that gave NRBQ its texture and range, Adams actually seemed healthier and happier than he had decades earlier. All of the old songs sounded amazing, while tracks from a fine new studio album (Brass Tacks) were folded seamlessly into a catalog that refused to stop growing.

As had been his signature stage persona for decades, Adams whirled like a dervish, rocked delightedly from foot to foot like a kid on Christmas morning, and percussively beat his forearm on the keys of his Clavinet when rhythm won out over melody. At one point, he chased off the drummer to bash away on those for a while, smiling from ear to ear while keeping the beat.

And why not? He turned back cancer to reach an age John Lennon and George Harrison would never see, maintained his small but fiercely loyal fans, and found a new bunch of “boys” to go out and play with.

And playing, I maintain, was the point of rock and roll in the first place.

NRBQ returns once again to Shank Hall on Tuesday, September 13.