Republicans pass bill with "poison pills' that will force veto by Gov. Evers.

By Melanie Conklin, Wisconsin Examiner - Feb 12th, 2020 12:14 pm
Get a daily rundown of the top stories on Urban Milwaukee 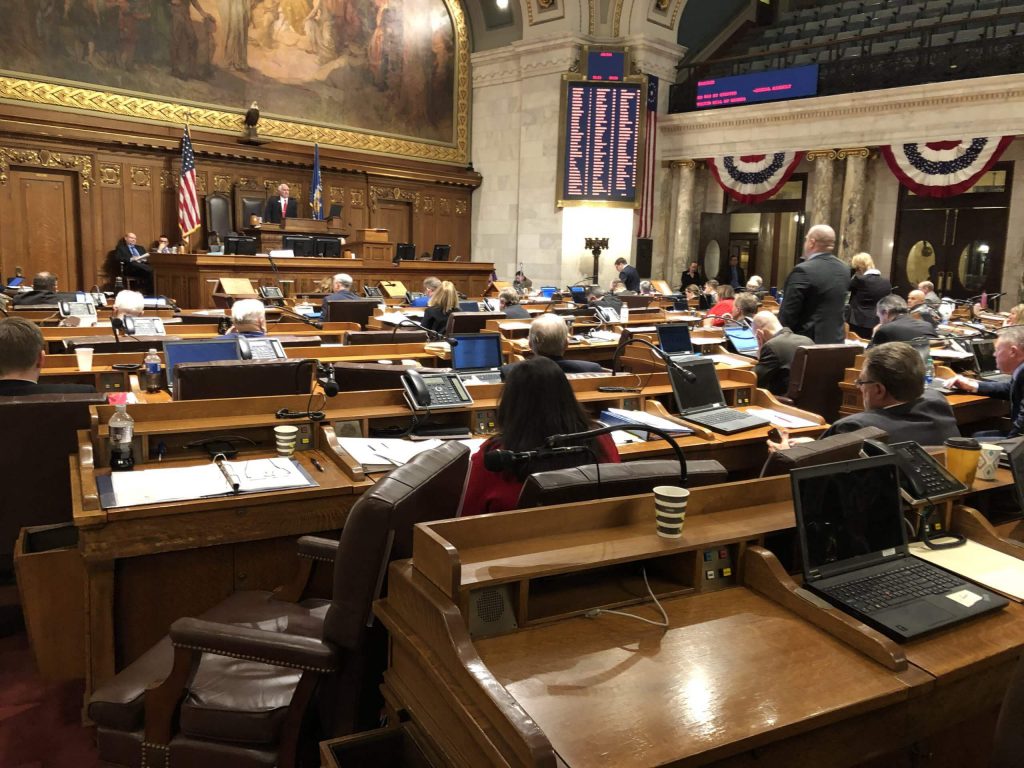 During a 2/11/20 debate on bills to prevent a rape kit backlog many Republican seats (left side of Assembly floor) sit empty with no GOP leaders present. Photo by Melanie Conklin/Wisconsin Examiner.

The first signal of the contentious debate to come was Majority Leader Jim Steineke (R-Kaukauna) challenging the Democrats right to bring forward AB 214 — the bipartisan bill to prevent a rape kit backlog sponsored by 72 legislators. Democrats forwarded it as an amendment to replace AB 844, a poison-pill laden bill that ties preventing a rape kit backlog to the divisive issues of immigration and school vouchers. AB 844 also mandates that the Department of Justice do additional work and storage, but removes the funding needed to perform that work.

Three Democratic legislators — Lisa Subeck, Debra Kolste and Melissa Sargent — rose to speak for substituting the original bill, which had been worked on for years by attorneys general from both parties. 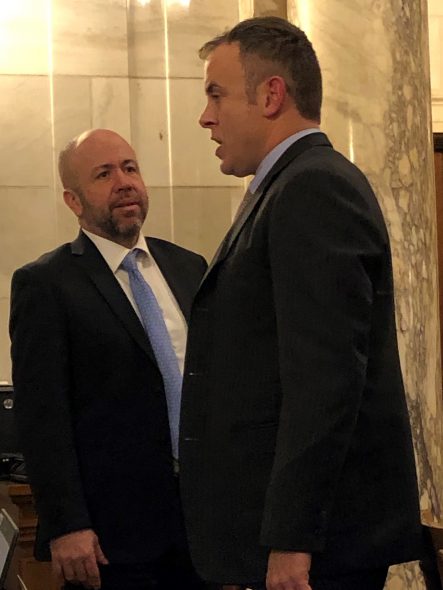 Each of them were cut off by the presiding chair, Rep. Tyler August (R-Lake Geneva), who had to speak loudly over the comments the women were making to declare that they were out of order because they were talking about the importance of addressing sexual assault rather than discussing the validity of the “point of order.” The Democrats knew this, of course, but forced Republicans into the awkward position of silencing women advocating to prevent sexual assault.

“The majority of this body was on AB 214. I can’t say the same for AB 844,” said Kolste (D-Janesville), before being cut off. “I would like to know who did this and behind what closed door. We already have an option that can move forward. It was passed by the Senate. It can be passed by this body. It can be signed by the governor.”

August then ruled that AB 214 coming forward as an amendment was out of order. Rep. Mark Spreitzer (D-Beloit) challenged the ruling and he was voted down by the majority.

“We have 150 minutes scheduled to debate this bill, and six or seven minutes have been used already,” intoned August.

That’s when several Republicans claimed that they were just trying to help sexual assault victims by inserting provisions tied to the contentious issues of private school vouchers and involving Immigration and Customs Enforcement in sexual assault arrests.

“I get it, you aren’t happy with the politics, but my vote today is going to be on the process,” said Rep. Amy Loudenbeck (R-Clinton). “If we want to do it and ensure that the policy and the process is in the statute … our bill is more, our bill is better, our bill is comprehensive.”

Everyone in the room knows the bottom line is this: AB 214 would go straight to Gov. Tony Evers desk and be signed into law. AB 844 — if the Senate approves it — stand little-to-no chance to become law. And a well-crafted plan with years of work will die when the session ends next month.

It is indisputable that AB 844 was fast tracked through the process with no bipartisan support and criticized by every single member of the public, sexual assault survivors, their advocates, nurses and law enforcement officers who testified at a public hearing last week for a long list of reasons.

Republicans returned portions of AB 214 to the new bill, improving it. But left in place the poison pills and stripped funding (which may have been done so there was no appropriation, which would open up the possibility of an  Evers partial-veto).

Those experts’ testimony was disregarded in formulating the new Assembly bill. Their technical explanations of why the new bill, its timeline and even well-intentioned measures including giving victims the right to bathe as part of a victims’ bill of rights (that forensic nurses explained were not feasible) were all ignored. Attorney General Josh Kaul’s concern that  funding being stripped from the bill that made other elements unworkable was also disregarded.

Democrats pleaded with Republicans to take up the bipartisan bill the Senate had approved on a voice vote so it would go straight to Gov. Tony Evers’ desk.

“There is a straightforward bipartisan bill we should be taking up that would truly protect survivors,” said Rep. Chris Sinicki (D-Milwaukee). “You’re trying to get us on a bad vote on this bill. And you’re trying to get the governor. … You chose to let hundreds of rapists walk the streets.”

Sargent (D-Madison), identifying herself a survivor, offered a first-person look at the harm being done on the floor:

“No piece of legislation can ever erase the trauma of sexually violent experiences. We are failing to effectively test kits … a very important step in providing victims a path to justice. Morally, I implore you to think about the trauma that has been inflicted upon too many victims in our state. Think about how it is that people are going to wake up tomorrow and realize that these measures are not being put into place.”

Republicans responded with emotional pleas to Democrats asserting it was Democrats inserting politics into the issue because they objected to private school vouchers being offered to victims and ICE being brought into arrests. In advance of the session, Speaker Robin Vos told reporters, “The only ones who are making this into a partisan issue are my Democratic colleagues who are choosing to take the things that we put in, which I think are better … that they are objecting to it just because of their own personal ideology.”

Things slid into disorder on the floor as Rep. Loudenbeck (R-Clinton) demanded of Democrats who opposed the new version of the rape-kit tracking measure, “What is wrong with this data bank?”

“It’s not funded,” came shouts from the Democratic side of the room in response.

“What I know is that if it is a priority you fund it, and you did not fund the rape-kit tracking system,” said Rep. Chris Taylor (D-Madison) later.

Other changes to the bill that advocates objected to in AB 844 included Department of Justice employees being assigned to do jobs such as calling victims that could cause confusion and problems for victims.

“I’m incredibly saddened that this has turned into a political football as it has, I’m so saddened that my friends and colleagues have chosen to go this direction,” said Rep. David Steffen (R-Green Bay). As the author of both rape-kit bills, he admitted in committee that the items that were changed and added were done so to win the votes of Republicans in his caucus rather than win a bipartisan vote in the Assembly.

He offered a different view on the floor:  “There wasn’t a single Democrat that came to my office in the crafting of AB 214 or 844 since the day I announced I was going to be doing this back in August of ‘18. Not a single one said, ‘Can I work with you? Can I be involved in this issue?’

“When I worked on AB 214, I said, ‘That’s a Rembrandt.’ I was joking a bit … but I believed I was crafting the best bill I possibly could,” said Steffen. “We deal with a lot of imperfect here. It’s part of being a legislator, it’s part of democracy. If there’s unfinished business please know my door is open to work with you next session.”

Survivors of sexual assault and their advocates who spent years helping put together a bipartisan bill were no doubt infuriated by this lesson in democracy.

The Assembly moved on to a new topic — increasing penalties for drunk driving. Bills to raise the mandatory minimum from six months to 18 months for the fifth and sixth offenses passed.

Then, at nearly 9 p.m. came a surprise move that left the body standing silent. First, a bill prohibiting sex with animals was pulled from what’s known as the Senate message (bills the Senate has passed and sent to the Assembly). Penalties for beastiality were hastily approved on a voice vote.

Republicans had not wanted to put the bill on the agenda as the topic of sex with farm animals is not one they wanted to draw media attention, so they put it through as a surprise late at night. It passed with no discussion.

But by taking a bill off the Senate message, the door had been opened for other items that have passed the Senate to be pulled to the Assembly floor. Spreitzer saw his opportunity and seized it.

He made a motion to pull SB 200 — the bipartisan rape-kit companion bill to AB 214 that passed the Senate and was sent to the Assembly last October. For a moment everything went silent. Even the screen that runs red electronic messages announcing what bill is before the body went blank. Republicans momentarily scrambed.

Then August jumped back in, plugging ahead, “It’s a non-debatable motion.” Republicans voted against bringing the bipartisan bill forward as Democrats voted for it.

“It’s a shame that Republican authors of the bill had to vote against their own bill, passing on bipartisanship,” Spreitzer said after the vote. “They had an opportunity handed to them to be bipartisan.”