He and Chris Larson look likely to make it through the February primary. 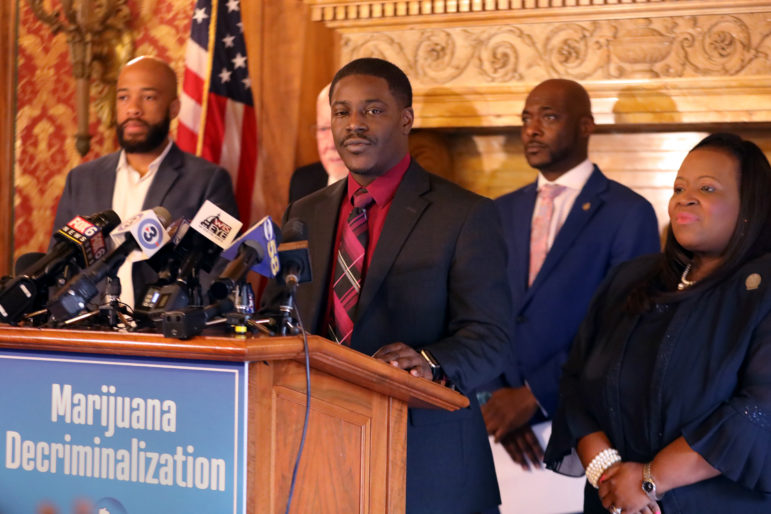 It seemed like a master stroke by County Board Chair Theo Lipscomb in his race for Milwaukee County Executive: Lipscomb’s legal challenge of the nomination papers of Jim Sullivan and Bryan Kennedy was upheld by the state Election Commission and then the courts, wiping out two of his key opponents.

Kennedy, as Glendale mayor, overlapped part of Lipscomb’s county supervisor district, leaving them likely to divide the North Shore vote. And Sullivan, a Milwaukee county department head and former state legislator, had gotten the maximum possible contribution from retiring County Executive Chris Abele, no fan of Lipscomb, who might have been expected to spend big through his third party Leadership Milwaukee group to elect Sullivan.

But as it turned out, the real beneficiary of Lipscomb’s move was candidate David Crowley, the Democratic Assembly Representative. Because Kennedy quickly moved to endorse Crowley for county executive while offering what might seem like a slap at Lipscomb: “We can trust that David Crowley will be putting the people first — not his own ambition — as our next Milwaukee County Executive.”

One day later we learned that Abele had switched to supporting Crowley, with his Leadership Milwaukee group making a six-figure ad buy for Crowley, as the Milwaukee Journal Sentinel reported.

In short, Lipscomb had assured that rather than a vote split between six candidates, it would now be down to just four candidates, with much of the backing for Kennedy and Sullivan now combined to support Crowley.

Crowley, moreover, had already been far ahead of Lipscomb in money raised, with nearly $54,000 compared to Lipscomb’s meager $14,000. Now, Abele’s Leadership Milwaukee would be spending at least $100,000, leaving Crowley ahead of everyone in the money game, including Democratic State Sen Chris Larson, who reported having raised just over $61,000.

“Even before the Abele buy I was seeing the most advertising from Crowley,” says a Democratic operative.

Worse, there could be backlash among county voters for what Lipscomb did to Kennedy and Sullivan, each of whom had many supporters. “Lipscomb got them off the ballot, but he made himself look bad,” says another Democratic operative. And Lipscomb poured salt on their wounds, declaring “I wasn’t afraid to do it in my own name. I’m proud to stand up for the rule of law.” Even worse, it turns out that some of Lipscomb’s nomination signatures were collected in the same way that he accused his opponents of doing. That may be the image that sticks for him.

“Theo just doesn’t have a salient message let alone the money to push it through if there was one,” says attorney Dan Adams, a Democrat with connections to Abele who appears as a regular political pundit on Friday mornings on WTMJ.

“Theo is spending money on robo-calls” notes a veteran campaign operative. “I mean, is this 2006? People hate robo-calls.”

From the beginning of the race for county exec, most observers rated Larson as the favorite given that he ran in 2016 and defeated Abele in the primary. That, of course, was before getting buried by Abele’s huge campaign spending on ads, resulting in the incumbent winning by 56 percent to 44 percent in the general election.

In the wake of Sullivan and Kennedy getting thrown off the ballot, Larson still looks like the favorite and probably gained some voters who will switch to him.

But Crowley has surprised people. Last week he gained the endorsement of District Attorney John Chisholm, who lauded Crowley for his “unique background and impressive record…I know the impact that David’s work around public safety has had at the state level.”

That said, he is far behind Larson, who has been endorsed by five state legislators and a long list of unions and activist groups.

There is one presumed Republican, Trump supporter and climate change denier Purnima Nath, who got involved in controversy at a recent Voces De La Frontera event. But Republicans aren’t expected to spend money on her long-shot candidacy, given the critical race for state Supreme Court, where they hope to elect conservative Daniel Kelly.

In short, the county exec race could be a one-two finish by Larson and Crowley. Adams offers this prediction: “I think Larson will get 40 to 50 percent of the vote, Crowley will get 25 percent, Lipscomb 20 percent, Nath 5 percent. I don’t see how Crowley misses second place unless there is an unforeseen scandal.”

Other experts were less definitive because the February election is likely to be a low-turnout affair, which makes prediction far harder. If there is a low African American turnout, that probably hurts Crowley. But all agreed that Crowley was on the rise and has a very good chance of getting through the primary. And if he does and Abele decides to spend big on Crowley for the general election? He could win it all.