By Isiah Holmes, Wisconsin Examiner - Feb 7th, 2020 11:55 am
Get a daily rundown of the top stories on Urban Milwaukee 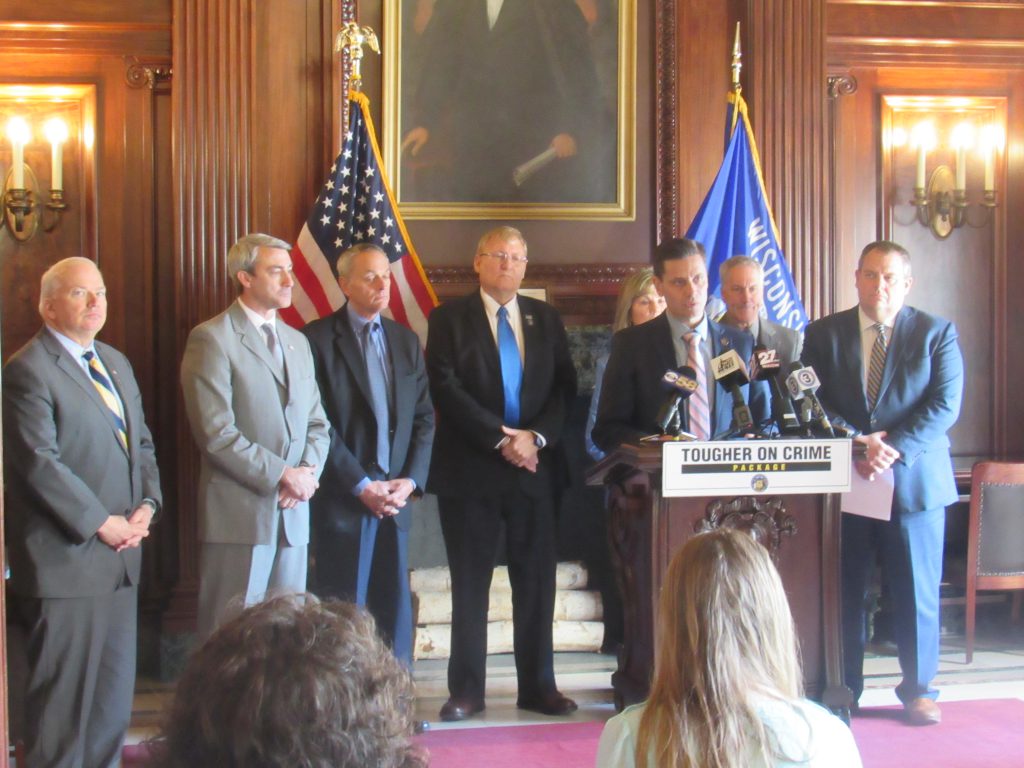 The “tougher on crime” sponsors gather to announce the new bills. Photo by Isiah Holmes/Wisconsin Examiner.

“I think it’s really important to give the police the tools they need to do their jobs,” Darling told Wisconsin Examiner. Generally, that’s what the group of Republican lawmakers supporting the bill package say they are trying to do. Although Milwaukee has been at the center of the conversation since the bills were introduced, the group asserts that it’s not specifically targeting the city alone.

“This problem of auto thefts and carjackings are not just problems for Milwaukee, they’re problems for all around the state,” said Darling. Nonetheless, the city’s woes continue to be a main talking point for the “tougher on crime” collective.

Majority Leader Scott Fitzgerald (R-Juneau) stated he’d noticed, “a drumbeat going on in the city of Milwaukee and then beyond that, statewide, that deals with a couple of specific areas. Obviously the carjacking, whether it’s snatch and grab or certainly just commandeering a vehicle — that’s one that’s been out there for some time. The media has been talking about it in Milwaukee for some time, and now that’s spilled over into other parts of the state — some of the more urban areas.”

“This is a significant concern, especially in the city of Milwaukee,” said Kapenga. “It’s a rampant problem.” In April 2019, the Milwaukee Journal Sentinel reported a 40% decline in the number of carjackings, as compared to the prior year. MPD’s Robbery Task Force made 553 arrests in 2018 and around half —365 arrests—involved carjacking. It’s a battle which is increasingly entering juvenile court. “The average age 20 years ago was around 40, and now all of a sudden they’re showing the average age is around 18 for these car thefts,” said Kapenga.

Expanding the list of offenses which could result in juvenile incarceration placement is also an aspect of the “tougher on crime” package. “There’s no teeth,” said Kapenga, “we just want to make sure law enforcement has the tools that they need to start putting enforcement in place. But also, as we know … as you see the enforcement being put in place, and there’s some teeth in the law, people start paying attention to that. And hopefully they don’t go and commit these crimes.”

Darling is also proposing a $5 million grant program, Senate Bill 771. It seeks to increase funding for additional policing of carjackings, and to cover costs for strategic planning of law enforcement for communities. The Department Of Administration (DOA) would be responsible for implementing the program, and communities are required to report back to the agency two years after receiving the funds. Areas with higher instances of carjacking will be prioritized for grants.

Those requirements don’t make it clear how police departments will be allowed to spend the money, however. Rep. Joe Sanfelippo (R-New Berlin) stated that the grant bill would help “to get more police officers on the ground.”

“We’ve seen a trend over the state that our police force has shrunk by about 3%,” Sanfelippo added.” Darling, however, explained that the funds may fuel more than just manpower shortages. When asked if the grant money would be used for manpower or additional technology and equipment, Darling told Wisconsin Examiner, “They can do both. They submit a grant, we review the grant and decide who’s able to get them and who’s not able to get them.”

Milwaukee is already the recipient of significant law-enforcement resources, as it was chosen as one of seven U.S. cities which will be part of the federal Operation Relentless Pursuit, a $71 million push against violent crime. Then there is the $50 million grant which the city is applying for to lock down additional policing and security for the Democratic National Convention (DNC). Through this grant, the Milwaukee Police Department (MPD) will be able to obtain new equipment and technology, the extent of which is not yet known.

“Crime in Wisconsin is kind of defying what’s happening around the country where we see about a 14% decline in violent crime,” said Sanfelippo. “But if you take a look at Wisconsin, our 10 most populated cities are seeing a 24% increase in crime. So, is there a correlation between less officers on the ground and more crime in our neighborhoods? We’re hearing from our law enforcement agencies that we need more help, we need more boots on the ground.”

A part of the problem is dwindling budgets with cities, particularly Milwaukee, being forced to do more with less. Sanfelippo invoked the last budget cycle for the city, which included cuts to the police department. “We’re hearing from our local officials that their budgets are stressed, and paying for more officers sometimes is not an option,” he said.

Hundreds of residents, however, flooded budget meetings in Milwaukee angered that, despite the cuts, MPD still enjoys 47% of the city’s budget. Residents spent hours shaming Milwaukee officials, Mayor Tom Barrett among them, for not investing in education and community programs focused on violence prevention and enriching youth. The GOP also cut shared revenue to Milwaukee during the state budget battle, shortly after Gov. Tony Evers took office.

Meanwhile, Democrats are promoting bipartisan legislation which essentially counter-acts everything the ‘tougher on crime’ collective is advocating. Rep. Evan Goyke (D- Milwaukee) and Sen. Lena Taylor (D-Milwaukee) introduced bills designed to reduce recidivism, and lower the prison population. “This bipartisan package of bills to reform our justice system is built from the experiences of other states to safely reduce the prison population and reinvest in savings to reduce crime,” said Goyke. Reducing the prison population has been a focal point for the Evers Administration.

A major criticism of the “tougher on crime” package is the costs of incarcerating more people in a state like Wisconsin. “As I said when the bills were circulated,” said Taylor, “building a new prison may cost more than $300 million with an ongoing annual cost of anywhere from $20 million to $40 million depending on the capacity and level of security.” Taylor described a “looming crisis in corrections,” which is compelling other states to find another way out.

Goyke also took on Sanfelippo directly, asserting, “The Republican authors never once offered any evidence, example or peer state that proves the contention that the ‘tougher on crime’ legislation will in fact reduce crime and if so, by how much.” He added that “several Wisconsin organizations also have serious questions about the ‘tougher on crime’ legislative package, including law enforcement and prosecutors.” Goyke remains unimpressed by what he feels are efforts to make criminal justice into a partisan issue.

Sanfelippo, however, has a different take on why the package is important. “These bills are meant to increase public safety,” he said. “Most of the people who live in our communities are law-abiding family people. They just want a safe neighborhood to raise their families, and we’re not providing that for them right now. So these bills are aimed at taking them into consideration as part of our criminal justice system.”