Zoo Backs Off On Elephant’s Transport 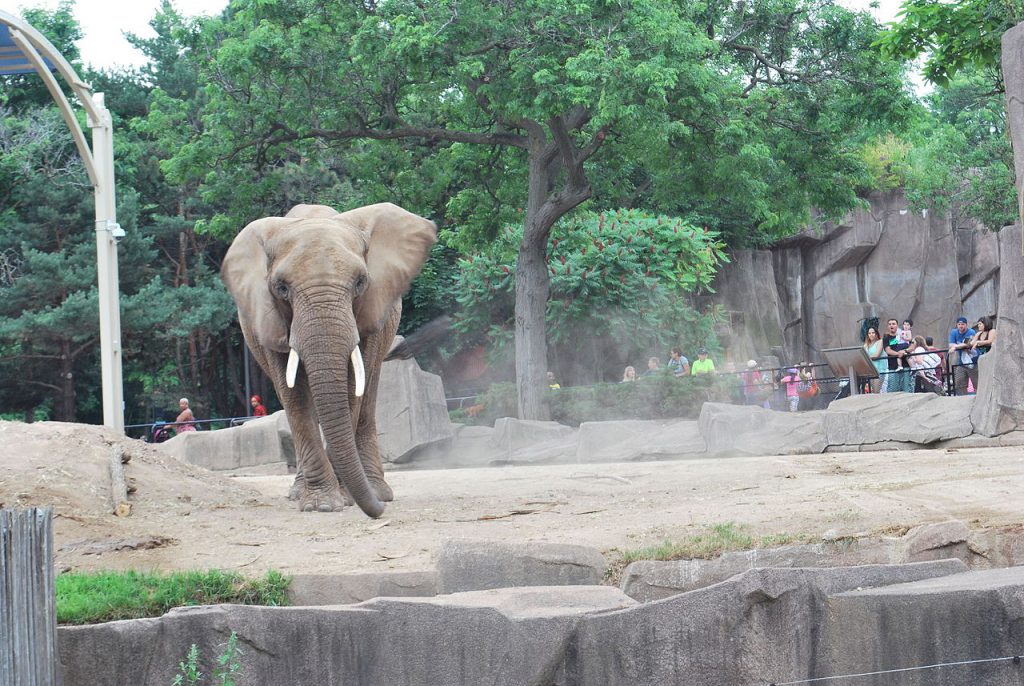 Animal rights advocates raised alarms about an African elephant the Milwaukee County Zoo was preparing to acquire, but now the zoo says it has no plans to receive the elephant. What happened?

In Defense of Animals (IDA), an animal rights advocacy organization, went public with documents showing the planned loan of an elephant from the Pittsburgh Zoo and Aquarium’s International Conservation Center to the Milwaukee County Zoo because they say it will result in the disruption of important social bonds. The group was also concerned because the documents show neither institution wanted to take responsibility for proper transportation of the animal.

Laura Pedriani, marketing and communications director for the Milwaukee County Zoo, told Urban Milwaukee the Pittsburgh Zoo approached them about taking the elephant, but said there are currently no plans in place to bring the elephant to Milwaukee. “We are in no rush because of the ongoing introduction work with our three elephants Ruth, Brittany and Belle,” said Pedriani,

At issue is an African elephant named Seeni, and according to IDA, she has already led a traumatic life. Seeni was captured in the early 1990’s after her family was slaughtered. She went to live on a preserve in Botswana. There she met Sukiri and Thandi. The three elephants formed a close social bond and lived together, and continued to do so after all three were sent to the Pittsburgh Zoo in 2011.

In 2017, Seeni gave birth and the Pittsburgh Zoo immediately took her calf away. Three months later the zoo euthanized the calf when it became sick. Two years later, Thandi was separated from Seeni and Sukiri, and sent to a zoo in Canada. Now, Seeni could face separation from Sukiri, her last social bond forged after her family was killed.

In the wild, elephants typically live in close-knit herds, said Laura Bridgeman, director of IDA’s elephant campaign. Studies show they demonstrate self-awareness. “They are a very emotional species, a very social species,” Bridgeman said. Severing social bonds can be traumatic for them.

Asked about the zoo’s position on seperating elephants with social bonds, Pedriani said, “It is up to the individual facility’s elephant management team (in this case the Pittsburgh Conservation Center) to determine the best course for the animals’ well being.”

Professor Caitlin O’Connell, an expert on elephants, told National Geographic in 2016, “In my experience studying both wild and captive elephants, I would argue that the quality of bonds within a captive social environment may also be an important predictor of mental health and something that should not be taken for granted.” O’Connell was responding to questions about a comprehensive study that showed social enrichment was likely more important to elephant welfare than size of the enclosure in which it lives. And this is for a migratory animal that, in the wild, travels long distances, over hundreds of miles.

IDA’s general position on zoos is that they are not suitable places for elephants. Elephants living in captivity often suffer from chronic illness and die prematurely, Bridgman said.

Zoos typically loan elephants around for mating purposes, Bridgeman said, in order to maintain genetic biodiversity among the populations living in captivity.

Emails released by IDA show a document from the Milwaukee County Zoo lists the transaction terms for Seeni the elephant as “Exhibit loan.”

The documents show the Milwaukee zoo’s Curator of Large Animals saying in March of 2019, “Pittsburgh has agreed to loan us elephant.” And in April, saying, “The loan paperwork is already being started by Pittsburgh.” Emails between veterinarians and zoo staff at both institutions show that Pittsburgh was testing Seeni’s health and sharing medical records with Milwaukee in preparation for her transfer, even discussing the preparation of import-permit paperwork.

The Pittsburgh Zoo is considered by IDA to be the worst facility in the country for elephants. In 2015, they forfeited their accreditation by the Association of Zoos and Aquariums (AZA) because they refused to change their procedures for handling elephants. AZA guidelines call for “protected contact” procedures, which place a barrier between the handler and the elephant. Instead, Pittsburgh continued the use of their “free contact” practice, which is associated with the use of bullhooks to handle elephants. Numerous advocacy organizations say the use of bullhooks is a cruel practice for elephant handling.

Documents released by IDA show that as recently as August 2019 the Milwaukee County Zoo was declining to send a veterinarian to Pittsburgh to accompany Seeni during her transport to Milwaukee County. An email to the Pittsburgh Zoo stated that Milwaukee’s zoo managers “prefer that the shipping institution remain in charge of the shipment and health of the animal until it is unloaded here in Milwaukee.”

An email from the Pittsburgh Zoo director of Animal Health asks for Milwaukee County vet staff to accompany the transport, with this note: “I had a bad experience once after a black rhino sedation for crating and then that animal passing away in transport, resulted in a large fine and action from USDA since we did not have a vet or tech with shipment.”

Pedriani, however, says Milwaukee’s zoo has no plans at this time to receive Seeni from Pittsburgh.

“Pittsburgh was indecisive about the move and schedule,” Pedriani said. “As winter approached, we told Pittsburgh that we would not consider any further, a possible transfer until sometime later this year. In the meantime, we acquired Belle. Her integration into our herd is our first priority.”

In November the zoo announced that, “After much anticipation, African elephant, Belle, has arrived at the Milwaukee County Zoo. Transported from Riverbanks Zoo and Garden in Columbia, South Carolina, she arrived at approximately 3:30 a.m. Wednesday, Nov. 20.”

Zoo Director Chuck Wikenhauser noted that “At 38 years old, Belle is a good fit for integrating with Ruth and Brittany, who are the same age.”