Next Act Play Punches Above Its Weight 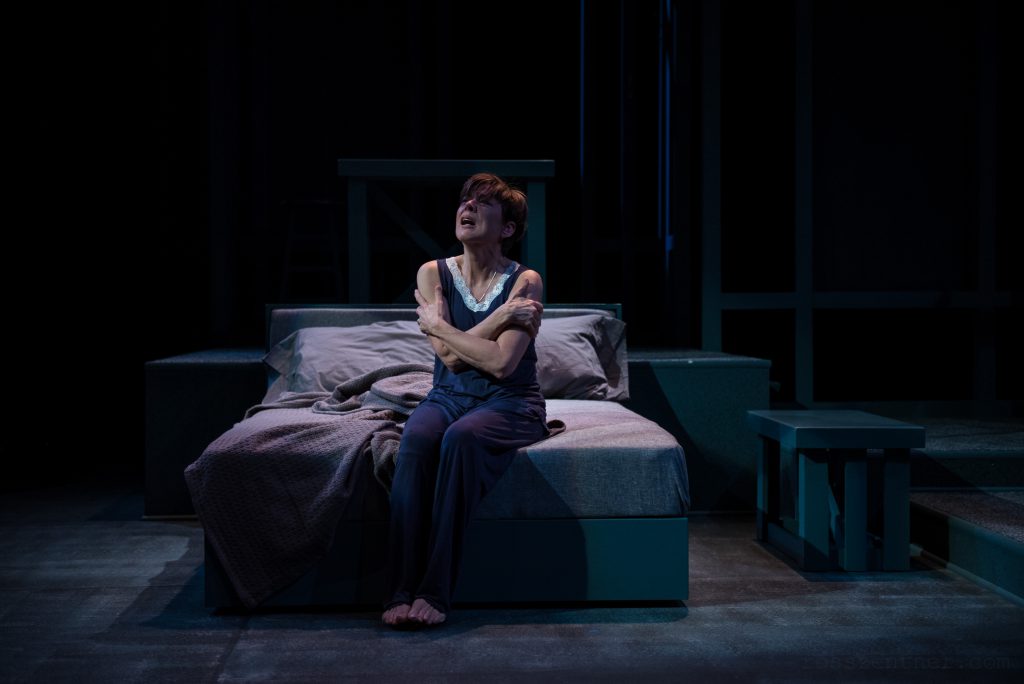 Adam Bock’s A Small Fire is a sparely written chat within a family. It doesn’t make a big global deal about the Bridges family and their daily concerns –  Emily is the owner of a pedestrian construction company, crisp, efficient, more at home bossing the boys on the job, particularly her hearty right-hand man Billy, than pretending to be the typical housewife. John is the loving husband, no fireball, readily accepting his wife’s natural superiority in running the roost. Daughter Jenny, clearly a daddy’s girl about to be married, may love her mother, but has spent a lifetime quietly snarling at mom’s controlling ways.

Into this relatively normal family steps a strange yet familiar sort of family tragedy. In some families it’s Alzheimer, in others a variation, in the Bridges case mystifying even to the doctors. The mere act of telling the story and relying on the quality of these actors make for an engrossing 75 minutes through February 23 at the Next Act Theatre.

Emily is suddenly losing her sense of smell. Then taste. Then sight, then hearing. Doctors can’t explain, family activities are wrenched, but it’s mainly pick up and go on. The caregiver is being squeezed into silence and there is no road map for her or the others.

The Bridges represent a “what would I do” test for the audience, the playwright and particularly the actors. Nothing spectacular here, just solid skipping around in the progression. Artistic director David Cecsarini orchestrates this inescapable journey of reality relying on a capable cast that knows how to give that quiet step-by-step edge. It takes a lot of talent to do that rather than screaming.

Mary MacDonald Kerr sees Emily as the acted upon, suffering in small doses of loss and then big doses of frustration as all that she relied on in life slips away. She rotates slowly in her silences to give us time to see her – a smart touch.

Two classically trained actors subdue their natural stage power to perfectly fit the circumstances – Jonathan Smoots as the husband quietly determined not to let go, but not sure why he is being tested; Mark Corkins as the burly Billy with a surprising empathy underneath his country cousin manner.

Emily Vitrano is the daughter in all of us, angry at her own lack of commitment, but determined as the mother must have been to go her own way. Smoots allows us to see a private man’s internal motors while Vitrano makes us recognize the ego pull within us all.

The interplay of these four is the story – not spectacular but involving. Playwright Bock makes a few missteps, trying to paint Billy as a more broadly motivated character than the story requires. The play has to pretend a bit too much that there are offstage activities and celebrations going on, forcing the actors to react a bit too often to fabrications of outside society kept at bay.

But Cecsarini trusts his actors to create a dramatic punch from what makings are there and from the surprising human dimensions of how a typical middle class unit has to look to its core.

In the lobby there is a rotating slide presentation reminding patrons of how often over the years such interesting shards of life have been intelligently pulled out and inspected in past Next Act productions. 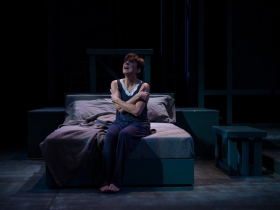 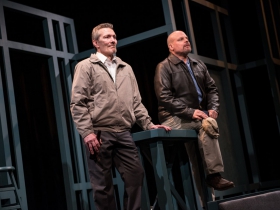 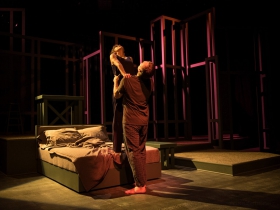 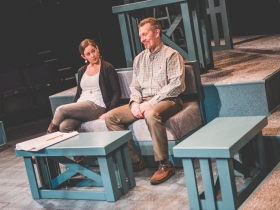 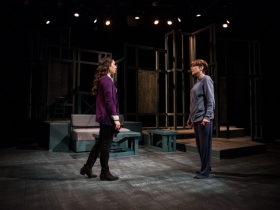