Gender-bender musical is a kind of carnival mixing comedy, drama and a bizarre love story. 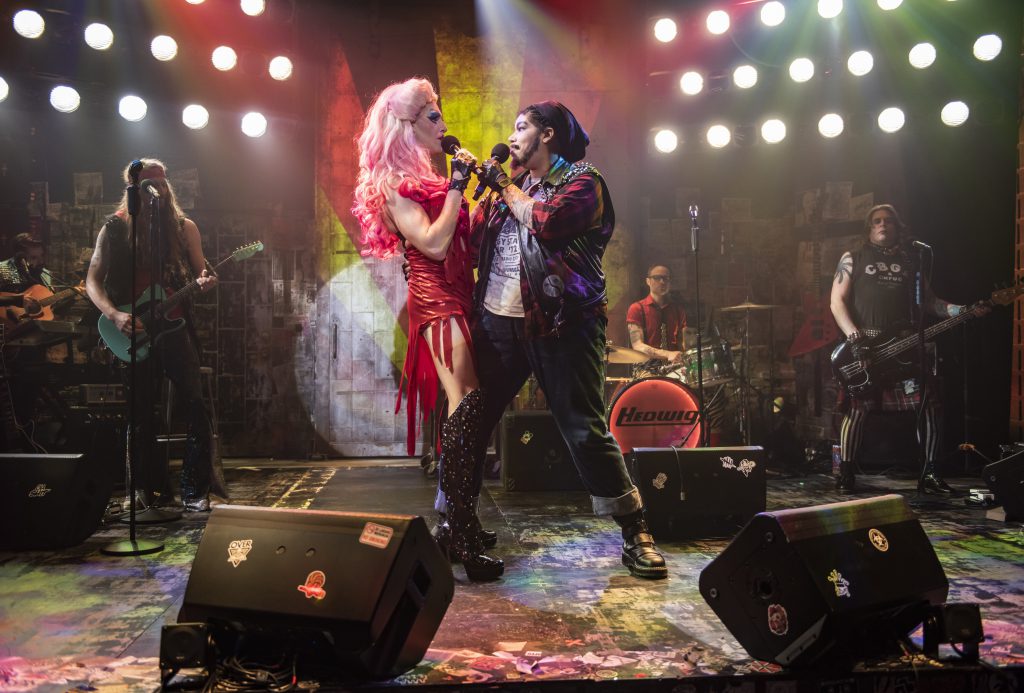 With a comedic drag play on the mainstage – The Legend of Georgia McBride reviewed earlier — and the Stiemke Studio converted into a gender-bending smoke and strobe filled rock haven with glam groomed ushers for Hedwig and the Angry Inch through March 8, you might think artistic director Mark Clements, whose passion baby Hedwig is, decided in his 10th season to drag Milwaukee kicking and screaming into the fringes of New York theater.

You’d be wrong, though the Rep of late has a tendency to look east for its casting. Hedwig and the Angry Inch in its great spirit and exuberant fun is just where it should be – more like a carnival festival for Milwaukee than the dense gender-queer story some feared. It’s been a mainstream theater attraction for years.

Maitre d’ Clements and a dedicated crew have converted the Stiemke into a fabulous welcoming atmospheric mix of theater seats and drink tables, strut-ways and neon light shows that will amuse and involve audiences not as attuned to the doings as the opening night crowd clearly was.

Sure, Hedwig is a man in flaming drag, his bearded mate and road groupie is a woman, his presence has its dark side and much of Hedwig’s standup comedy routine, which dominates the show, is noted for double entendres  and genitalia joking with willing as well as planted audience members.

But it is a party time musical that goes back some 20 years in gestation and already has and deserves sing-along groupies a la The Rocky Horror Picture Show. It plays with the Berlin Wall and Greek literature as metaphors for our gender attitudes and insecurities. Hedwig is revealed not only in glitter person whose diminishing clothing and outsized eyes carry the creation along, but in stick-figure slides and documentaries. This moves him from gender jester to gender victim, dealing with physical mutilation and psychic rejection (an arena in which it is difficult to reject him/her as some sort of gender/queer aberration – where would any of us be after such an upbringing?). But those serious tones and bizarre love stories slide neatly under the humor and sheer musical energy of the proceedings. The spirit of the play is a refusal to succumb.

The journey dances on the edge of insanity and sarcastic control, full of ribaldry that names the Stiemke location next door to the Pabst Theater and even jokes around in this version with past Rep names like Judith Light and Jeffrey Tambor. And these are some grand rock’n’roll songs like “Tear Me Down,” “Sugar Daddy” and “Wicked Little Town” that may in genre belong to the Iggy Pop/David Bowie school but are truly theatrical gems of storytelling and driving rhythm created by Stephen Trask (text by John Cameron Mitchell) and performed brilliantly.

The ear plugs handed out to the patrons are more than a gimmick because there is a no-holds barred house band led by Dan Kazemi (he and his merry men are dressed like tattooed roadies from the Grateful Dead) and there are remarkable harmonies and power in the mix of Matt Rodin as Hedwig and Bethany Thomas as his/her bearded bitter husband Yitzhak.

Rodin struts around the stage, vamps the audience and reveals uncomfortable loneliness and anger in the process in a standout hard-sell performance that mixes improvisation with completely prepared responses. Only in some of the changes within the character can you fault the actor – Hedwig is a difficult dude to keep in control – but the expressiveness and pure rock power of his singing are captivating.

Usually a reviewer is meant to clarify relationships within a play, but there is a deliberate plot mystery in why Thomas, slouchy and grim, often singing extremely powerful backup to Hedwig, has reasons for the series of harsh stares at Hedwig while Rodin himself mixes a stunning falsetto and genuine baritone in manners that constantly clobber the audience into attention. Thomas, as Rep patrons well know, has an astonishing voice of her own that sneaks up and around us. There is a side play of hurt love whose details are best left for audiences to discover. Sometimes these interactions are better than the plot elements in holding the characters together, since they live on a show biz plain more than in real life.

Director Clements has mastered the technical accomplishments of creating a fixating rock environment — but there is still a difficult psychological progression for Hedwig that neither he nor the often hypnotic Rodin have solved. Underneath the glitz we recognize that Hedwig is still inventing ways to connect us bit to bit and person to person.

Hedwig and the Angry Inch Gallery 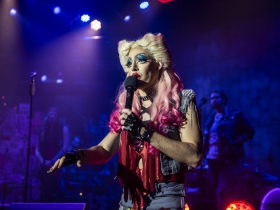 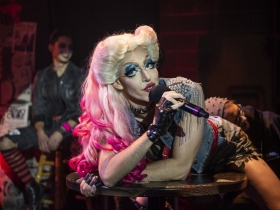 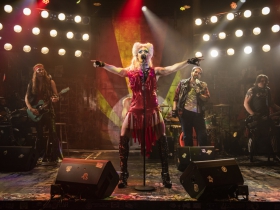 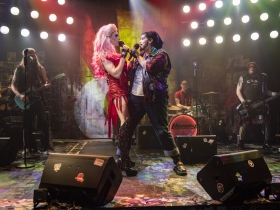 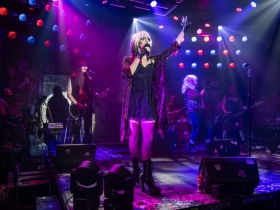 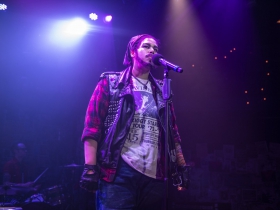