‘Legend of Georgia McBride’ is cliched, but sizzling performances make it a fun romp. 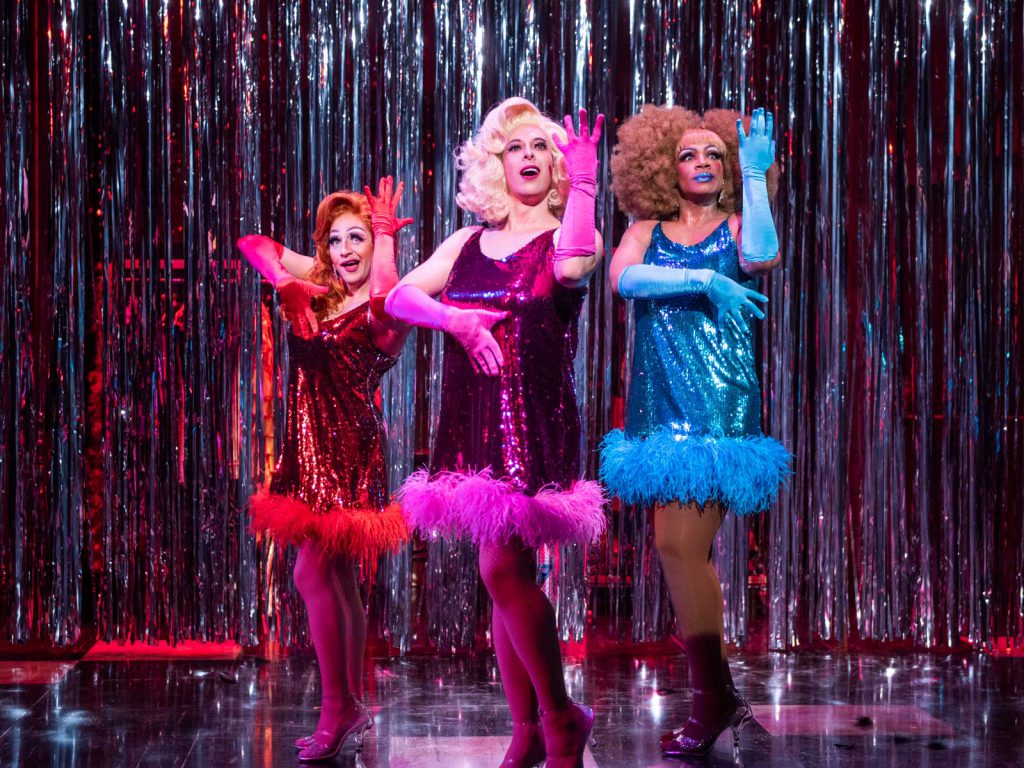 The Legend of Georgia McBride. Photo courtesy of the Milwaukee Repertory Theater.

Ostentatious clothes, outrageous wigs, showy cross dressing and drag shows have become entertainment bling-bling over the last few decades.  Once something theaters were afraid to openly explore – though cross-dressing was a staple in Shakespearean times and even earlier — it has been embraced by mainstream America over the last few decades in TV shows, RuPaul on the red carpet line, a movie-turned Broadway musical like Tootsie and musicals like Kinky Boots and La Cage Aux Folles.

The Milwaukee Rep may have thought it had grabbed the best of  both worlds – heterosexual meaning and gender-bending comedy —  with The Legend of Georgia McBride, Matthew Lopez’s comic play about how a straight man (Casey, a second-rate Elvis impersonator) finds success and money under the forced tutelage of a veteran drag queen.

It’s the financial big-time for his impending family baby — as long as he can keep his wife from knowing how he is making all this loot at a Florida Panhandle nightclub by tossing his hair and flicking his butt amid the outrageous bawdy dialog and backstage slang of his new enterprise.

Thus we can have a heterosexual love story under some fantastic traditional drag queen outings, an update of how a man learns to squeal like a diva along with the updated Tootsie message of man telling his wife “I was a better man as a woman” than I had been before. The play takes a long way around to an old domestic message, though it attempts to drop lessons about the advance of gay culture and its mistreatment by the masses. But a first-rate cast delivers the clichés warmly and benefited from claque-like laughter opening night. Besides, the heights were genuinely funny moments.

Rep director Meredith McDonough is blessed with a violently busy tech crew for flying costumes, flipping mikes, pinpoint recordings of the famous voices (Piaf, Judy Garland, Liza and on and on with a particular fondness for big-haired country music and modernistic divas like Rihanna). The sound control is top-drawer and brings its own bursts of laughter.

Audiences I suspect will be more blown away by the traditional lip-syncs (and crazed costume changes) of the famous we all know rather than the onslaught of modern-day flash and prancing that goes on far too long. Maybe it’s just my age, but the old standards whipped up more delight than modern brassier big notes.

But my, what performances! The standout is Courter Simmons as the whiphand drag queen who can impersonate anyone when the sound is right and takes the young Elvis novice (Kevin Kantor) under ferociously funny wing until he looks and acts – and grows to love – being a woman.  Kantor gives a clever performance moving from rube to take-charge performer, but he is also saddled with a long poor song by the author to try to return the story to reality.

Armand Fields does double duty in the show and has a standout drag queen lament, but it is in moments like this that the show is trying too many dramatic flourishes.  Simmons, as the gay man who leads Casey to his trade and its rich history of toleration, then chastises the young man he literally lured into performing for being a straight man slumming in a gay world.

I much enjoyed Lopez’s previous serious outing of The Whipping Man at the Rep six years ago, but I remember worrying then about his tendency to go back to the same observations too often. This is even a bigger problem here. The theater has grown past his sitcom setups.

Shavanna Calder does more than the story line deserves as the pragmatic but confused wife and Rep veteran James Pickering is a hoot as Eddie the club manager moving from sloth T-shirt to gaudy jacket, a series of advancing costuming and emcee styles as the switch to drag works at his club. It’s been decades at the Rep since Pickering has been given so much space to have so much fun.

The play’s lesson of tolerance and acceptance becomes more an excuse to engage in unabashed drag – including some bounces into audience laps – rather than anything truly moving.