ACLU organized lobbying day calls for an end to policies that contribute to mass incarceration.

By Isiah Holmes, Wisconsin Examiner - Jan 30th, 2020 01:51 pm
Get a daily rundown of the top stories on Urban Milwaukee 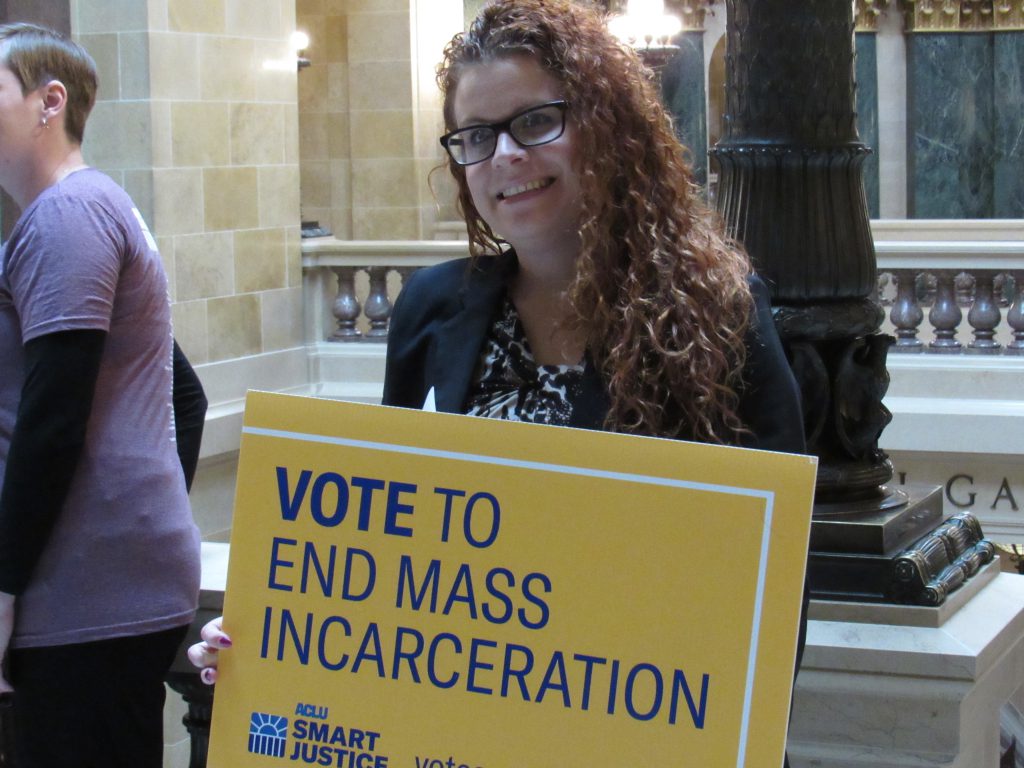 Hundreds of people flooded a hearing room in the Capitol Wednesday afternoon, to participate in a lobbying day hosted by the American Civil Liberties Union (ACLU) of Wisconsin. Community members, activists and formerly incarcerated people gathered to call on their elected officials to support policies that would reduce mass incarceration, and end crimeless revocation in Wisconsin. 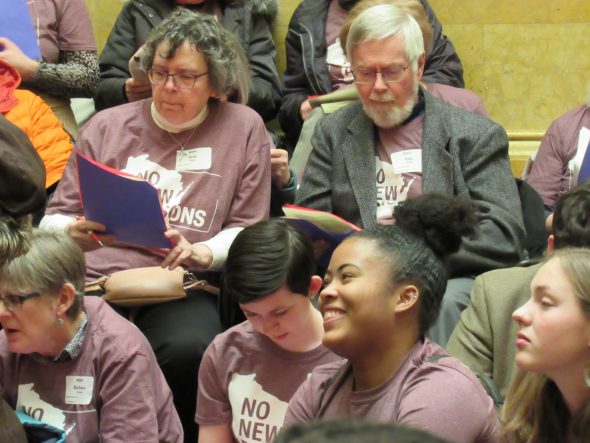 “You folks have all gathered from all over Wisconsin to say ‘no new prisons, end crimeless revocation, restore voting rights to fix this broken criminal justice system that is not only horrible on its own merits, but is worse than all of our neighboring states,” Emilio de Torre, ACLU community engagement organizer, said before the crowd. “We have 23,000 people incarcerated in our state prisons, over 12,000 people in our county jails, and over 60,000 people on probation. All of whom are counting on you.”

Wisconsin has long been an outlier when it comes to criminal justice, particularly as it relates to minority communities. The Badger State began the last decade with the highest rate of incarceration for working-age African American men in the nation. Inside its borders, Wisconsin has the highest rate of parole supervision among its neighbors, with the length of parole double the national average, Wisconsin Public Radio reports.

“Last year,” said de Torre, “Wisconsin spent $1.2 billion on correctional services. That’s more tax dollars than the state spent on the entire UW system. Our prisons are growing by 35 people each month, and our prisons are out of room, and grossly over-filled.”

Figures like these are compounded by the revolving door effect of crimeless revocation, which sends people on parole back to prison for non-criminal acts. Reasons can include being late to a meeting with your parole officer or moving to another home without prior notification Lance Ley, a resident of Oshkosh, business owner, and ACLU volunteer knows this all too well.

“I was convicted of drug charges,” he recounted, “I got out of prison in 2010 and I had nine years of extended supervision. July of 2018, I’d done eight and a half years, no problems, no trouble, no nothing.” Ley used the time to start his own business in 2015. But everything changed in July 2018. “Someone called my probation officer with allegations that I was threatening, and using drugs, and leaving the state without a travel permit, and had a firearm.”

After taking Ley into custody and searching his home, authorities only found alcohol which, he says, they didn’t even accuse him of drinking. Nevertheless, Ley went back to prison after his parole was revoked. “So, I went back to prison for a year for having alcohol in my house,” explained Ley. The experience nearly cost him his business, and threatened the livelihoods of Ley’s 28 employees, some of whom were on probation themselves.

Michael Hartman, a Milwaukee resident, shared with Wisconsin Examiner the ripple effect Ley’s arrest caused while he, too, was still on parole. “When they revocated him, I lost my job, and in my household we started arguing about money. Well, the argument got really loud and someone called the police, and I ended up getting incarcerated myself, too.”

People whose probation or parole is revoked, before going to prison, may first spend time inside places like the Milwaukee Secure Detention Facility, a controversial facility where the administration has been accused of mistreating inmates. “They don’t have the same privileges a state prison has,” said Hartman. ‘We don’t get to go outside. We don’t breath fresh air, there is no sunlight. I’ve slept on the floor there for two weeks, three weeks. My head’s right by the toilet. People use the bathroom where I laid down.”

Ramiah Whiteside, another current parolee, made an impassioned plea. “Don’t send someone back as a first resort to prison,” he told Wisconsin Examiner. “Maybe as a last resort, or at least properly investigate these allegations before you send them back to prison.” Whiteside called it, “a vicious cycle that perpetuates itself, and we don’t have to do that.”

Making legislators listen to such stories was a main goal of the ACLU lobby day. After a brief training session, attendees broke up into groups according to their Assembly district. They sought out their respective representatives to try to talk to them about the stark realities of mass incarceration.

“We can go in there and we can say that we’re spending billions of dollars on corrections in the state of Wisconsin, and that might go in one ear and out the other,” ACLU state-wide Smart Justice organizer Sean Wilson warned the groups. “But if you go in there and tell them how you’ve been impacted — how your daughter, your son, your neighbor has been impacted by the policies and pieces of legislation on the books currently — that may resonate with them.”

Not all of those policies are left over from the past. A group of Republican lawmakers recently introduced a new package of “tougher on crime” bills, framed as tools to combat violent offenders. Among the measures were bills affecting probation, and the juvenile offender program. The bills came as Gov. Tony Evers moves to reduce the state’s prison population, and even close some facilities. In 2019, Democrats held a Black and Latino roundtable to discuss a variety of criminal justice reform issues. 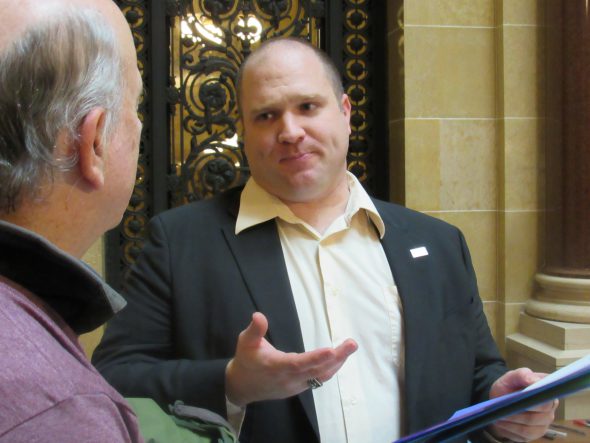 Sylvester Jackson, a formerly incarcerated person and activist, called the tough-on-crime bills “a political stunt.” Instead of spending more money on  incarceration, he urges legislators to invest in programming, and reducing the prison population. “To continue to pour money into something that has proven to be non-effective is a waste of taxpayer dollars,” Jackson says. He is old enough to remember tough on crime pushes in the 80’s and 90’s, and sees the parallels through time. “Locking up citizens has not solved the problem,” said Jackson, warning legislators, “we’re going to hold ya’ll accountable.”

Not all the legislators were tucked away in their offices, or preoccupied with meetings. Some of the groups reported lengthy conversations with their representatives. Rep. Shae Sortwell (R- Two Rivers) was waiting outside the meeting room’s doors and spoke with several people. “I think that there’s a lot of bipartisan reform that could happen in criminal justice,” Sortwell told Wisconsin Examiner. “For me, from a conservative standpoint, I truly believe that the best social program that’s out there is a good job. Trying to make it more difficult for people to get good jobs and businesses is not good for society.” Nevertheless Sortwell admits, “I’m a bit of a minority in my caucuses.”

The ACLU will continue this push for criminal justice reform as Republicans discuss the tougher on crime bill package. Activists and formerly incarcerated people plan to testify on bill on Thursday January 30. Their message will be clear, “We need to invest in communities, not in cages,” said de Torre, “and we need to address the root causes of harm, rather than inflict more of it.”