Art You Can Drink To

The Art Bar show of mosaic works, “Parts Made Whole”, does nicely with or without a drink.

I don’t drink much but when I do, a little vodka is nice. Sitting at a cozy corner table at the Art Bar (722 E. Burleigh St.) in Riverwest, sipping a Titos and seltzer, I watch as groups of people congregate and energize the space they share. Each group has its own energy and configuration. Every person, either a talker or a watcher, contributes to the personality of the group. So too with the many thousands of pieces that went into the mosaic works in the current show, “Parts Made Whole”, which populate nearly every open space on Art Bar’s brightly colored walls.

I’m sitting in the section of John Kowalczyk works, a wall of three-dimensional mosaics which resemble altars. Each piece is shaped and has a rounded platform that extends from the bottom which is trimmed with tassels. Mermaids, all seeing eyes, a classical Madonna and a tiger populate these shrines. I notice the height at which they are hung and their placement above the seating below. They seem like ritual cosmic hats ready to transport the wearer below them into unknown realms.

My eye moves to the Leann Wooten section and I notice a man by the pool table holding a pool cue horizontally across his stomach staring at a piece on the wall. He has been looking motionless for a minute or two at a large skull mosaic. Upon closer inspection, I notice he is looking at his own reflection in the mirrored background surrounding the skull. His trance is broken as I come near. I look at my own reflection juxtaposed against this jeweled skull and I think for a moment about my own mortality as my eyes dart to the label which reads, “RIP Dad”. On another wall is a large red- winged blackbird piece which seems to defy gravity, the stone and tile turned to feathers. Again there is a mirror element, this time not around the edges, but it is the heart of the bird. Wooten’s pieces have a totemic and ritualistic quality which engages the viewer in a tactile trance over the finely crafted surfaces.

The lone piece by Marcela Munoz Palma and Felipe Luna Hermosilla of an abstracted mother and child is polished and assembled with precision. It is a nice juxtaposition to the larger, more expressive piecing and mosaic work of Jessica Laub. Hung around the bar and seating area, you are forced to come close to her works, which often have rough edges juxtaposed with glitter or colorful gems. These pieces portray human or cosmic collaboration and have titles such as “Engaging Conversation”, “Appreciation”, or my favorite, “I like You”. In this piece, two profiles look at each other lovingly from each side of the panel. The man’s ceramic lips are magnetically pulled towards the woman who grins with anticipation. The background is a conglomeration of celestial sparkly magic, how two people may feel about each other in mosaic form.

On an adjacent wall, this activity is watched by a line of cats by Ann Mory Wydeven. They are all uniform and seem to be taken from the same folk mold, but upon closer inspection are worlds unto themselves. A piece called “The Brew Cat” is covered in tile and bottle caps which resembles armor or tortoise shells and is an intriguing contrast to the normal fluffy coziness of this subject. One work has ceramic swans swimming on its surface and another shows elves climbing on the cat’s body which turns into a little hill.

The saturation of color and surface play mixed with the wide variety of work in this show is a fitting way to begin piecing together this new decade. It’s a fun show at a fun bar, and runs until late February. 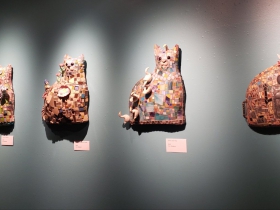 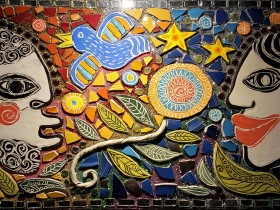 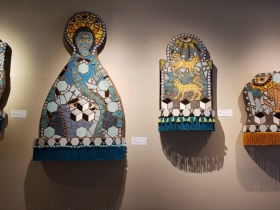 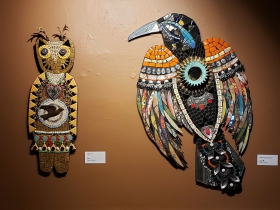 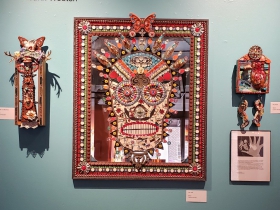 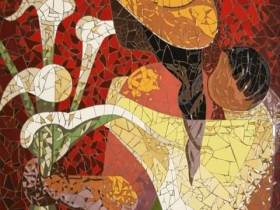