‘The Irishman’ Is Not the Best Scorsese

And doesn’t deserve best film Oscar. And yet it's powerful, and meaningful on many levels. 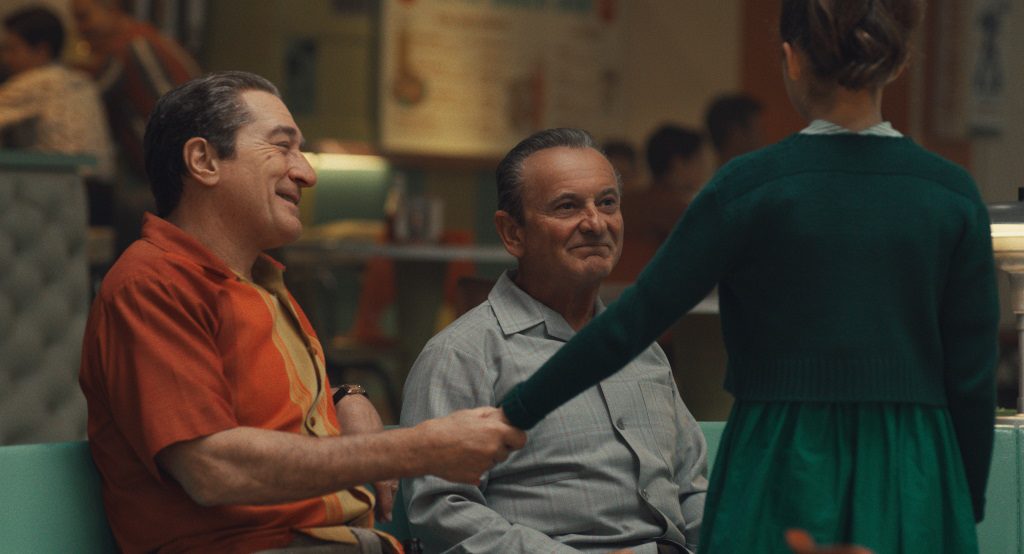 At a bowling alley, Frank Sheeran (Robert De Niro) attempts a show of warmth to his daughter Peggy (Lucy Gallina) in front of Russell Bufalino (Joe Pesci). © 2019 Netlfix US, LLC. All rights reserved.

It’s almost an afterthought to see an actual Martin Scorsese film nominated for a Best Film Oscar – so many other movies have borrowed from him.

Scorsese is one of our prime movie makers, rescuer of cinematic history and influential in using old and new techniques: Tracking, long shots, following footsteps on the road to death, criticizing TV interior panning, humanizing close-ups and casual violent encounters – never take your eyes off the screen when one character meets another in a Scorsese film — always relating our times to our gangster attitudes. He has also eloquently attacked the Marvel Comics world of film making as a new form of amusement park.

No wonder Quentin Tarantino, despite his own traits that dominate Once Upon a Time in Hollywood, routinely “quotes” elements of Scorsese in the way stories are told – and what side stories he wants to tell. No wonder Joker relies on Scorsese techniques and commentaries for its more cinematic moments. Even Little Women and Marriage Story – two other films nominated by Oscar — owe something to Scorsese in how they break the wall to invite the audience in.

Indeed in their speeches at award tributes to their own films, directors Sam Mendes of 1917 and South Korea’s Bong Joon-ho whose Parasite is my favorite Oscar film, singled out Scorsese as a vital influence.

In a young man’s industry, Scorsese is the same age as some leading presidential candidates (77) and about the same age as his famous stars of The Irishman – Robert De Niro, Joe Pesci, Al Pacino and Harvey Keitel, several of whom started their climb to film fame under his tutelage. This alone is one of the curious things about The Irishman – which flashes back into World War II where Frank Sheeran learned his trade of calmly killing people and then spends a lot of time in the 1950s and 1960s, locked down by the hit sounds of “In the Still of the Night.”

The characters in the underworld and corrupt union tale of Frank Sheeran would have been in their early thirties. All gone now, they succumbed at about the same age as the living stars who enact them. There is a slight age reversal, turning the stars younger for flashbacks, but we can’t escape noticing despite suddenly black hair, trimmer physique and groomed appearance that the actors are carrying a pronounced middle age and older physiognomy during their supposedly formative doings.

Yet we and Scorsese can’t quit them. We know he has been toying with telling this story for years and probably started at a time when the actors would have been closer to the ages he wanted. Scorsese has often been willing to work with younger actors, yet for this underworld tale he is relying on the Good Fellas aura he created in 1990 and even the aura Coppola created in The Godfather saga – so powerful was the impact of these actors in shaping our awareness of gangster mentality and murder for hire.

It’s an engrossing three and a half hours on Netflix rather than local theater screens, but it is not the best of Scorsese. It is much more an engaging revisit to the techniques and attitudes his team made famous.  It is a gripping story in how good friend Frank in the Teamsters killed Jimmy Hoffa, the popular boss of the Teamsters, but it relies on the personas the stars have established in many films.

It’s not just that it doesn’t fully qualify as best film of the year to me but it is always working on a couple of levels. This is Pesci, after all, moving from casual rabbi to close friend of De Niro’s Frank. So when he stares meaningfully at his buddy across the banquet room, we know not just from this story but from past experience that somebody has been ordered to die. We almost don’t need the silent accusatory stare of Frank’s daughter Peggy (played as an adult by Anna Paquin) of how evil her father is. De Niro is one of the few actors who can carry meaning in one grimace — both a sense of remorselessness and dismissive sorrow — as he goes about his job of “painting houses” (for the blood he spatters on the journey).

The best performance because of the energy of its range is Pacino as the volatile unrelenting Hoffa, but even this is well within the confines of previous Pacino outings.

In fact, Oscar nominating both Pesci and Pacino as best supporting actor seemed calculated to keep each other out of the running. The Irishman has legit chances for film editing and production design Oscars.

The film is like a long visit with old friends, marveling at times at the technique employed, but longing to see new wrinkles in time.