Who’s the Most Partisan?

By Melanie Conklin, Wisconsin Examiner - Jan 28th, 2020 01:08 pm
Get a daily rundown of the top stories on Urban Milwaukee 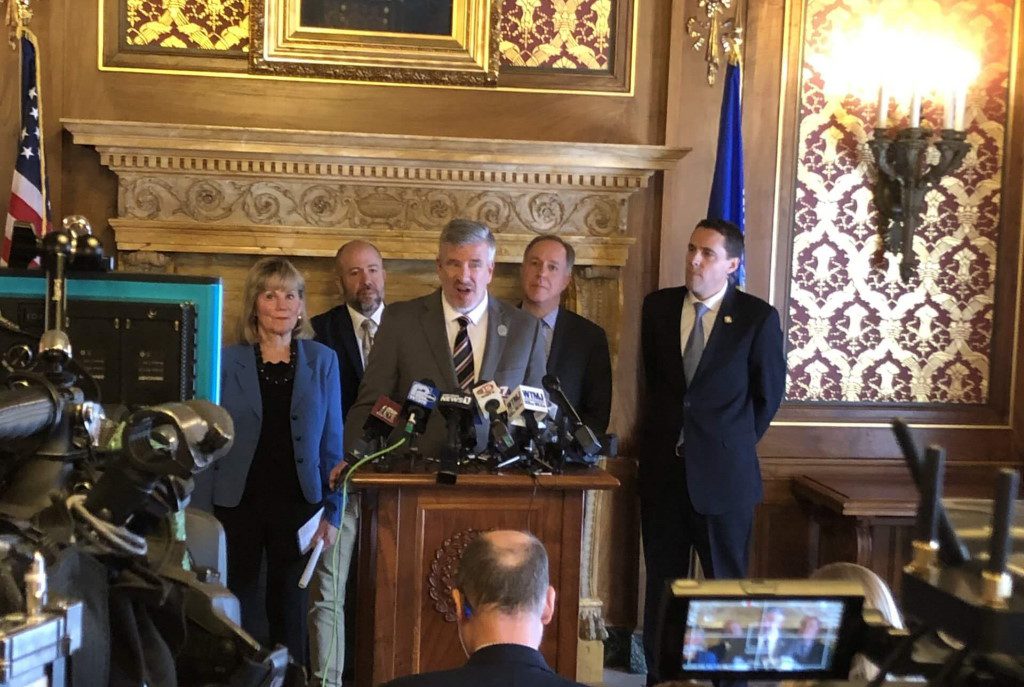 Republicans in the Wisconsin legislature doubled down on their new “brand” in response to the governor’s State of the Union address last week.

The sudden shift in message from the past eight years was perplexing, even to Capitol reporters.

Republicans switched from describing themselves as bold, unintimidated reform warriors of the Scott Walker years to bipartisan peacemakers who fault Gov. Tony Evers for being too controversial and not reaching out to them often enough. For example, said Speaker Robin Vos (R-Rochester), Evers did not reach out on combating youth vaping measures he unveiled last week, “where it could have been bipartisan.”

On Monday, Vos put out a news release responding to the governor’s call for a special session Tuesday on the farming crisis titled, “Agriculture should be a bipartisan priority.” In it he said he’s frustrated with Evers for promoting the rural agenda of his speech around the state, although Walker also always took his State of the State speech items on the road after the speech.

When Republicans were in charge, they dropped “the bomb” of Act 10 as Walker phrased it at the time. They repeatedly rejected Medicaid expansion money even though many Republican states took the funds. And they passed right-to-work laws. A costly tax cut for the wealthy and corporations, cast as a tax credit for manufacturers and farmers, was unveiled at midnight as a “surprise” on the last day the budget was in committee. Democrats complained of being excluded from all these measures and decisions.

But Vos pointed to times where he has included Democrats in governing on his task forces charged with finding solutions on such issues as suicide prevention, homelessness, adoption and water quality. (Although Dems have complained that their ideas such as red-flag laws to prevent violence or suicide with guns or more comprehensive solutions to PFAS water contaminationhave been rejected.)

The GOP ode to bipartisanship developed over the past year, after Republicans used a lame duck session to seize powers from the incoming Democratic governor and attorney general. Senate Minority Leader Jennifer Shilling labels those actions as Republicans going through the “stages of grief” from denial to anger over losing the election.

Some reporters were expressing skepticism at claims Republicans have long been bipartisan.

At a news conference last week, Vos, Rep. John Nygren, Sen. Alberta Darling, Rep. Jim Steineke and Sen. Roger Roth coordinated their attack on Evers for his lack of bipartisanship. These Republican leaders also touted their own bipartisan bonafides not only in the past year, but back into the Walker years. An Associated Press reporter asked if they thought the controversial lame duck session was an example of the stated GOP goal of toning down the rhetoric and partisanship.

Without hesitation, Vos immediately replied, “No doubt about it because it allowed for the legislature to actually be stronger.” He added: “I think that the ability from the special session is forced consensus, to say you have to sit at the table is something that perhaps Gov. Evers wasn’t familiar with.”

Asked after that news conference about Vos’ assertions that Republicans have been bipartisan, even in the lame duck session, Assembly Democratic leader Gordon Hintz sat in stunned silence for a few moments. Then he began to laugh.

“To take away the powers of a democratically elected governor and attorney general, was the single most partisan act in Wisconsin history,” said Hintz.

He sees much of what Republicans did during the eight years of full control over state government as hyper-partisan. “All their actions were largely about power consolidation —  defunding the unions, defunding the trial lawyers, campaign finance changes, redistricting, voter ID — anything that ultimately gave them an advantage.”

Hintz blames Republicans for holding up what he cites as truly bipartisan bills with sponsors from both sides of the aisle, such as closing the dark-store loophole and processing sexual-assault kits.

What Vos has actually done, according to Hintz, is to set up what he calls a “shadow caucus” to monitor and report to him on what all the agencies and the executive branch are doing. Vos hired seven new staff, doubling his staff size last year (three of the new hires are ex-Walker aides) and recently The Capital Times reported on his use of other staff to keep tabs on all the state agencies:

“For the better part of the last year, Assembly committee clerks and research assistants have been compiling weekly reports on the activities of state agencies, and there’s no indication the effort is winding down in 2020,” wrote Cap Times reporter Briana Reilly.

“Records obtained by the Cap Times show the Rochester Republican’s office directed chamber staffers to use their “weekly agency overview” documents to oversee vacancies and recruitment, waiver requests, lawsuits, news reports about departments and whether, for example, a deputy secretary may have posted “something questionable on a personal account.”

Vos explained that he believes it is the legislature’s job to hold the executive branch responsible and that Evers has been too secretive.

Hintz also says Vos has removed Democrats as sponsors from bills and has taken office space away from Democrats, even though the Dems picked up a seat in the last elections.

But his staunchest criticism is the lack of movement on bills to the floor and that the Republicans have indicated they plan to close down the session soon, so bills — bipartisan or otherwise — will die.

“This is the least productive legislative session in at least two decades, from a point of bills being signed into law, session days met, bills being passed — all despite the fact that the number of bills being introduced is the same,” says Hintz.

“I don’t think we’ve ever had a less partisan, less political governor than Tony Evers,” Hintz adds. “He’s not capable of being anybody other than that.”

Evers: From conservative to name caller?

Vos does give Evers some credit on bipartisanship — for signing “the conservative budget” that came from legislative Republicans.

However, Vos labels Evers’ initial budget proposal last year, a “wish list which would have repealed the Walker Era.”

“So I give him credit for bucking his party even though he is a liberal himself,” says Vos. “He certainly deserves credit for tacking to the right in signing a conservative budget. But then since then, calling names, you know, kind of doing things in a very partisan way, he certainly doesn’t seem to be bringing people together… I would say perhaps he [should] look in the mirror and say, ‘How can I bring people together to tone down my rhetoric, as opposed to just appealing to the far left?’”

2 thoughts on “Who’s the Most Partisan?”