Four great performers relive the era when a Grafton WI company was a leader in blues music. 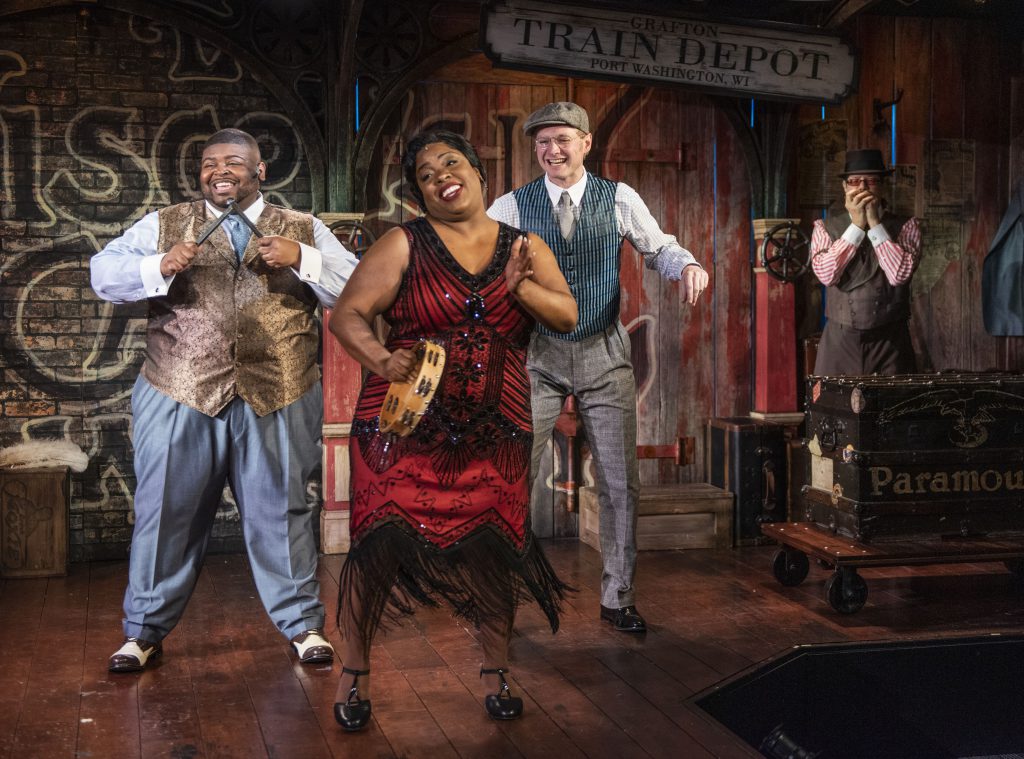 It is, after all, a cabaret, with table seating at which you can order quality food and drink if you plan it right. And it always features a musical theme show, usually imported performers and solid production values where the lights and sound system play with the patrons and there is always some interesting related history scribbled on the stage walls.

There are also other aspects of a formula at work. It is theater invented for the space and format, built around an era of music, usually jazz, or a famous singer or an assembly of famous diva names, or a musical geographic theme or even a down-home hootenanny, so you sort of go in knowing where you will be coming out – in a great gust of song finales and a good feeling for the performers you are leaving behind.

Chasin’ Dem Blues through March 22 made me stop worrying. Formula? Sure, but the Rep knows the possibilities of this better than I do and it works mightily to keep originality at the forefront of its choice of talents.

Moreover this one has been tested before under the title Grafton City Blues, both at the Rep and on tour, built around the decade of the 1920s when the pioneers of jazz and blues recorded in Grafton, WI, creating what were then known as “race records” under the Paramount Records label. Yes, good old Midwest Grafton.

Out of this long-lost Wisconsin history and some cleverly juggled research, Rep contributor Kevin Ramsey wrote, choreographs and directs (and also conceived some musical updates), choosing four extremely talented specialized performers to fulfill his vision and the impact of the times.

Sure there are some overly used train sounds and light-induced mood changes to move the story along. Sure, aside from the rich syncopation and lyrics recorded by Paramount Records, the house is brought to peaks again and again by another bit of formula — some familiar classics of the era like “John Henry,” “St. Louis Blues,” “Let the Good Times Roll” and a traditional bit of gospel and folk music known here as “Jesus on the Mainline.”

But the narration is engaging, the story elements are thoughtfully integrated, the original artistry dominates by reflection and it all grows your interest in the journey. The lyrics of the early blues artists are alluringly earthy or slangy and the personalities of Blind Blake, Blind Lemon Jefferson (if they were blind, boy could their fingers see!) and Charley Patton pop out of their music.

Even better, the four Stackner performers know how to embody and emulate the music so the guitar and piano riffs and the singing styles run close to the original tracks.

Two of the performers regularly add harmonies and have strong solos but they are there as instrumentalists first. Eric Noden is a true blues artist who is expert on guitar, banjo and harmonica. The ease and speed of his casual strumming are amazing.

He serves with James Scheider as music director and Scheider not only plays a mean ragtime piano and provides expert rhythmic singing, he stands in again and again for the dapper, clean-shaven if uninitiated white Wisconsinite who only sees the money not the pain in race records and rural manufacturing.

The other two performers are primarily lead singers of high caliber. Brandin Jay is both emcee and anchor, adding all manner of commanding pitch, portly nimbleness and infectious manner.

There is also a true Broadway voice, gospel performer and jazz singer – and they are all one, Maiesha McQueen, who can modulate any number of styles to dominate the stage. In one section she is the incarnation of early blues mother Ma Rainey, in another the modulated caresses of songbird Alberta Hunter. She’d be darn good if just chosen for energy, range and smile, but she brings so much more in expertise.

They all can harmonize and dance as needed – and director Ramsey has made sure they need to. There is one 15 minute break to order a drink and warm up you own voice, because you will be asked to join in the “shake it bake it” jive – and you will want to.