A Small Film About The Great War 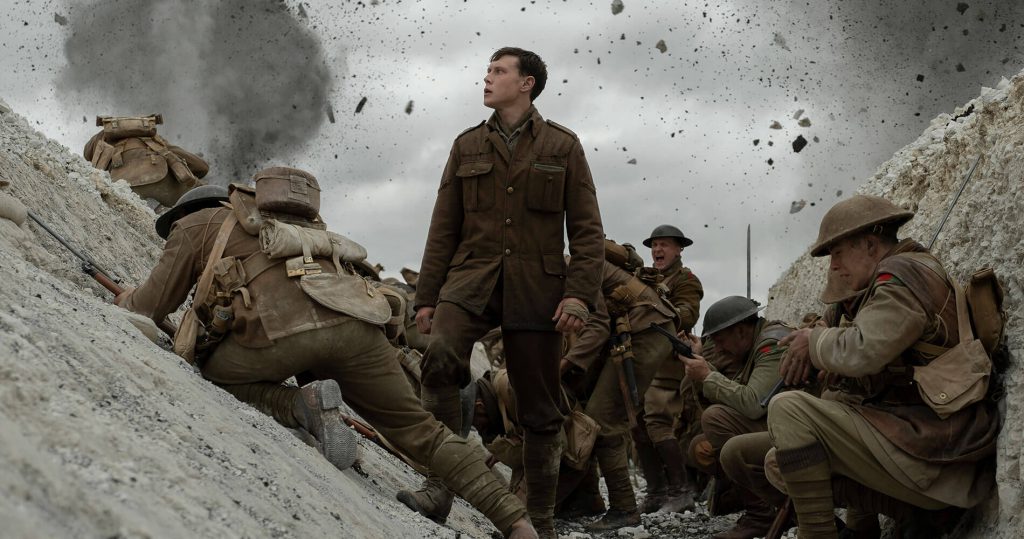 If there is (was) a Renaissance man of stage and movie theater, it should be British director Sam Mendes, now 57, who started out strong. His early films like American Beauty, Road to Perdition and Jarhead made stylistic waves. He has run theater companies and created such landmark productions as the renewed Cabaret and the Tony-winning The Ferryman not to mention Shakespeare, Harold Pinter and Tennessee Williams.

Of late he has been fascinated with his own commercial virtuosity as a geometric master craftsmen of huge productions marrying visual effects and CGI including two Bond films and now a two-hour opus devoted to fictionalizing the journey of two British soldiers on a mission to save lives through the broken countryside and endless trenches of World War I, pretending through clever darkness, passing trees and flash effects that it is all one continuous two-hour camera shot stitched into 1917.

Despite Mendes claim to be re-telling the stories of his grandfather and despite huzzahs that he is breaking cinematic ground in Steadicamming and Dolby sounding his way through claustrophobic tunnels and cratered pastures, running his camera endlessly alongside or behind his heroes and robbing us of the traditional master shots and reverse close-ups of how they react to events, his tour de force mainly calls attention to itself and to the decaying carcasses, live rats, manikin dead and wounded stunt doubles filling fields and streams. It is a major lesson in how to spend movie money in ways we can see up close and impersonal.

We become aware not of the cinema expanding but compressing into bravura technique, the human elements of the story diluted into how the next piece of the journey will be manhandled – and why some natural continuity is reduced to shadow Kafka nightmares to make it seem less theatrical while making it more artificial.

The mind roams. How come the soldiers are being sent on such a long journey when the one-shot pretense seems to put roaring rivers, muddy roads, empty and then bulging vistas and burning hellholes within a simple camera shot of each other? How come the pastoral silence so carefully allows composer Thomas Newman’s music to swell forebodingly, how come percussive bomb blasts never cover up important dialog (of which there is some if you want human hooks to the story)?

Look, couldn’t the drowning actor get a log to cling to a bit earlier? Why does our Tommy seem to forget people are shooting at him in favor of running tirelessly away, as if this were a scene from Chariots of Fire?

There is time to become aware that there is a plot rationale waiting when the departing Germans, way out of character, leave one live cow and a bucket of milk behind, since later the soldier we’re tracking runs into a woman hiding in a burning church and a baby who badly needs – you guessed it – the milk the solider has scooped up.

It’s not so much that Mendes marries the war clichés of the old Combat TV series – hard for any movie to avoid moments we now regard as clichés – and seems to adore letting his characters run into hardy helpful soldiers along the way in a war that in reality reduced human lives to cannon fodder. We are braced for but never meet officers marked by wholesale indifference to the fate of hundreds — the ones the film encounters have actor names like Colin Firth and Benedict Cumberbatch and they all can be convinced to save a battalion rather than send soldiers to their inevitable doom.

Why is there always something so noble as opposed to weird about soldiers singing in a silent forest? Why do cherry blossoms float into view at opportune moments?

For a truer face of this war’s savagery and lyrical song stunning soldiers into silence, catch Stanley Kubrick’s Paths of Glory of 1957 and even King Vidor silent movie romanticism of 1925 The Big Parade. They at least made suffering more than a concoction of camera trickery and asked their lead actors to do more than grimace in constant intensity, exhaust their bodies in an endless quest or stare in shellshock vacancy (though George MacKay can’t help but record a few impressive moments on his own).

There is even time while watching this film to contemplate how far removed from reality has become an awards ceremony like the Golden Globes, which chose 1917 at its best film of the year and passed out goodies to movies that almost no real audience had a chance to see and to TV shows that seem consumed with being “with it” as opposed to truly artistic.

I hate to beat up on the Hollywood Foreign Press Association, whose annual glitter party is much improved from 40 years ago when celebrities I interviewed complained about the hustle, when it passed out “best” honors mainly to those who promised to show up.

Today everyone shows up.  The studios see it as a giant promotion. The champagne flows, the celebrities flock to the tables and while I admired the sass and wit of Amy Poehler and Tina Fey as hosts, in contrast this time we had the returned vulgarity of  Ricky Gervais. Though he does have a point.  Those few outstanding moments of humanity provided by the likes of Tom Hanks and Michelle Williams were in contrast to the self-congratulatory nature of the event.

In this sense, the choice of 1917 was fitting. It is a technological tour de force but should have reminded the Hollywood press of the limitations of technology. I suspect it will not rank high among the films we itch to see a year, five years or 10 years from now, and I truly doubt that Mendes wants this the center of remembrance of his abilities as time goes on. While it sometimes seems more about actors running toward the camera to escape the explosive special effects antics of a battlefield erupting, like earlier actors ran from the threat of Jurassic Park dinosaurs, it can claim to be rescuing modern cinematic dramatics from the CI whoopee of Marvel comic books. Which is not much reward for two hours and $100 million.