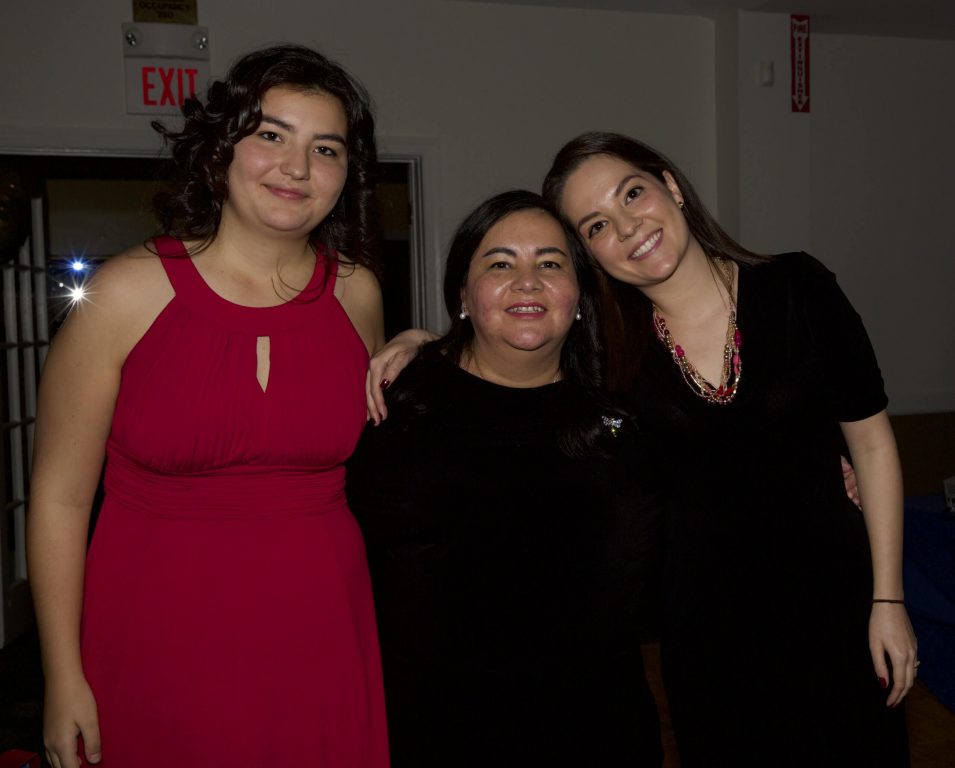 resident Donald Trump was just eight minutes or so into his Tuesday evening campaign speech in Milwaukee’s Panther Arena when for a moment the crowd turned its attention from the podium.

Trump’s audience booed at someone off to the side, out of view. Trump looked over, shrugged, turned back to the microphone, and dismissed what had just happened: a small group of protesters, unseen by anyone watching the rally via livestream, were being ejected after unfurling a banner: “No War. Vote Bernie.”

They left promptly and peacefully when it was clear they would be ejected; the crowd’s boos turned to cheers at their departure. “One protester. A very weak voice,” Trump said with a smirk.

“Now she’s gone home to Mom, where she will be in big trouble because I guarantee you that mom voted for Trump.” Loud cheers erupted. “And in 10 years from now, when I run yet again,’ she’ll be voting for Trump, too.”

Valderrama was not one protester alone. She was among a half-dozen who had gone in to the rally, the banner — she knew it was contraband — hidden in her clothing.

At 30 years old, she was not going home to mom, but to Madison and her family — her husband and their 1-1/2 year-old child.

Laura Valderrama didn’t hear Trump’s words live; she and her companions were out of the building by then. She first learned what the President of the United States had said about her when she saw a message on her phone.

“My friend texted me saying he was watching the livestream and he was so sorry that Trump mentioned my mom, and he couldn’t believe he did that,” Laura says. “I was so confused — ‘He talked about my mom?’”

‘He did not know me’

The words, she acknowledges, shocked her.

“It was just a testament to how much of a bully he is, how much of a con man he is. He tells thousands of people, ‘I guarantee you’ that my mom voted for Trump. But in fact it’s a lie.”

Here are some truths that Laura Valderrama wants people to know about her mother, Anamaria Markle, who died of cancer a little more than a year ago at the age of 52.

They are truths that, in their own way, helped put Laura where she was on Tuesday night, unfurling a banner among a sea of Trump supporters, calling for peace and calling against a war with Iran.

“She was a single mother. She was an immigrant. She came to this country when she was 18 years old with nothing, by herself, from Colombia. And she made a humble and beautiful life for the three of us  — my sister and me and her.”

They made that life in New Jersey, where Anamaria raised her two daughters, put herself through community college and went to work as an accounting clerk for a manufacturing firm.

Her mother, says Laura, was not  politically engaged for most of her adult life, even as she became an American citizen. “She always voted, but she always kind of felt like it wasn’t making much of an impact, but she did it anyway.” 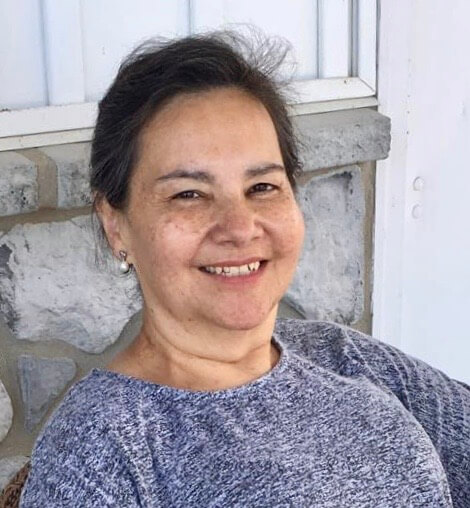 Her upbringing may have helped shape her mother’s political lack of interest: “In Colombia, political activism doesn’t always have a happy ending.”

The 2016 presidential campaign underscored that in some ways. It also made her pay attention for the first time in a way that she never had before.

“The most I’ve ever seen my mother afraid in my entire life was when Donald Trump became the Republican nominee. She was very afraid of him and his message.”

It didn’t matter that she had been a U.S. citizen for many years, Laura says. “She feared what he stood for and what the consequences would be.”

The Bernie Sanders presidential campaign that same year had the opposite effect: It excited her. “That was the most engaged she was about politics,” says her daughter.

The election outcome was devastating, but worse news came the next year when her mother was diagnosed with ovarian cancer. “She was absolutely crushed,” says Laura.

Anamaria’s employer of 18 years dismissed her, while paying one year’s salary severance pay and covering her health insurance for a year.

But the year passed, the insurance ended, and the family struggled, purchasing insurance under the COBRA law that enables employees who lose their jobs to buy health coverage through their former employer’s plan for a period of time. Her mother fought illness, and the family and her doctor fought the insurance company to get her treatment covered.

Laura was pregnant during much of her mother’s illness, and she would hear her mother say that “it doesn’t make financial sense to keep fighting.” Anamaria wasn’t fatalistic, but spiritual, her daughter says.

By now Laura and her husband had moved to Madison, where Laura gave birth to her daughter. When her baby was five weeks old, she traveled back to see her mother in October 2018. It was important to her mother that Laura and her husband have her daughter baptised, and the infant’s grandmother lived to mark that milestone. The next day she entered hospice care, and within two weeks, Anamarie Markle died.

Returning to Madison, Laura grieved deeply. “At that point I’m very new in town. I don’t have family and friends nearby. Here I am with a new baby, and I want to call my mom every time I have a question and I can’t.”

She knew it was time to make new friends. When she learned of a gathering for Sanders supporters, she went, and in the months that followed, she found the new community she was seeking.

‘We can’t be quiet anymore’

Trump’s impending Milwaukee rally spurred her and some of her friends into action. For Laura, there was no shortage of reasons

“What I saw my mom go through, the crisis at the border with these poor immigrants fleeing for a better life” — here, tears creep into Laura’s voice. “The idea of the war in Iran….It’s enough. We said, ‘we can’t be quiet anymore.’ I am frankly just tired of feeling helpless and just staying quiet.”

They decided to go to the rally. But their mission, she says, was not to confront, heckle, or shame Trump or his supporters.

“We would go inside, and when we felt the moment was right, we’d stand for peace.”

They resolved to stay nonviolent. “If any punches were thrown at us we would not retaliate.” If asked to leave, they would obey.

They got free tickets online, made their way in, kept themselves inconspicuous, and felt lucky when they were lined up in a prominent spot instead of up in the nosebleed section.

Bored during the lull before Trump came out to the podium, they engaged a group of Trump supporters in front of them to do the Wave. Pretty soon it swept through the arena.

And then, out came Trump, the moment arrived, Laura and her five friends unfurled their banner, and they were ejected.

Outside, where other members of their group were taking part in anti-Trump demonstrations, Laura and her companions made efforts to connect with people who were there to support Trump.

“For many, many years it’s just kind of ingrained in our country that fighting wars is patriotic,” she says. “But so many people fight wars they had nothing to do with and I’m tired of seeing it. And especially the Trump supporters are the ones being used as pawns, and they’re the ones that are most susceptible to sign up for wars.”

To the Trump supporters they encountered outside, they offered a message of reconciliation. “We’re here for you,” she recalls telling them. “We want you to be healthy and happy and safe.”

One conversation, with two young women and one young man who were Trump backers, was especially meaningful, she says. One asked why Laura and her friends were there.

“I told her, ‘We’re not here to put any Trump supporters down. We understand you feel the political system hasn’t worked for you. We understand that Trump has said things that sound good, like rebuilding infrastructure and bringing troops back home.’ We said, ‘he promised to do those things and now he wants to send you back to war, and instead of that money going toward military budgets and wars we should be using it to rebuild infrastructure and housing here.’ And we agreed that we all needed to work together.”

When the rally was over and those inside who had been cheering Trump poured outside, someone threw snowballs at Laura and her companions. Their new conversation partners, she says, helped clean the snow off of them.

A love both soft and tough

With a laugh, Laura says Trump may have been right about one thing: that she might have gotten in trouble with her mother for having gone there that night. Or, more accurately, left her very worried.

Anamaria lived by a love that was both very soft, yet tough when that was what was needed, her daughter says. If she were still alive, “I would not have told her in advance” about going to the rally.

But Laura is also confident of something else: “I know she would have been proud.”

When her mother was dying, “I didn’t know two years ago that I would be doing something like this. But I think she knew.” In one of those end-of-life conversations, “she kept telling me, I have always been very passionate about wanting to fix the injustices of the world.”

And one day, she hopes to tell her daughter about that Tuesday night in Milwaukee when the president came to town and mom held up a banner for peace and was jeered and walked out with her head held high.

“That it’s important to do the right thing, even when and especially when it’s hard or scary or both,” Laura says.

“Standing up and being booed by thousands of people is not an easy thing to do. But I didn’t feel scared because I knew it was the right thing to stand up for peace and compassion. The conversations that we had with a few people that we spoke with, and that wave, that moment of just everyone being together, that’s what it’s about for me. That’s what I’m fighting for.

“It’s about seeing the humanity in one another and not the superficial things that keep us divided. Reach out to those with whom you think you don’t agree and find common ground.”