And Jonathan Pryce deserves the best actor Oscar for his portrayal of Pope Francis. 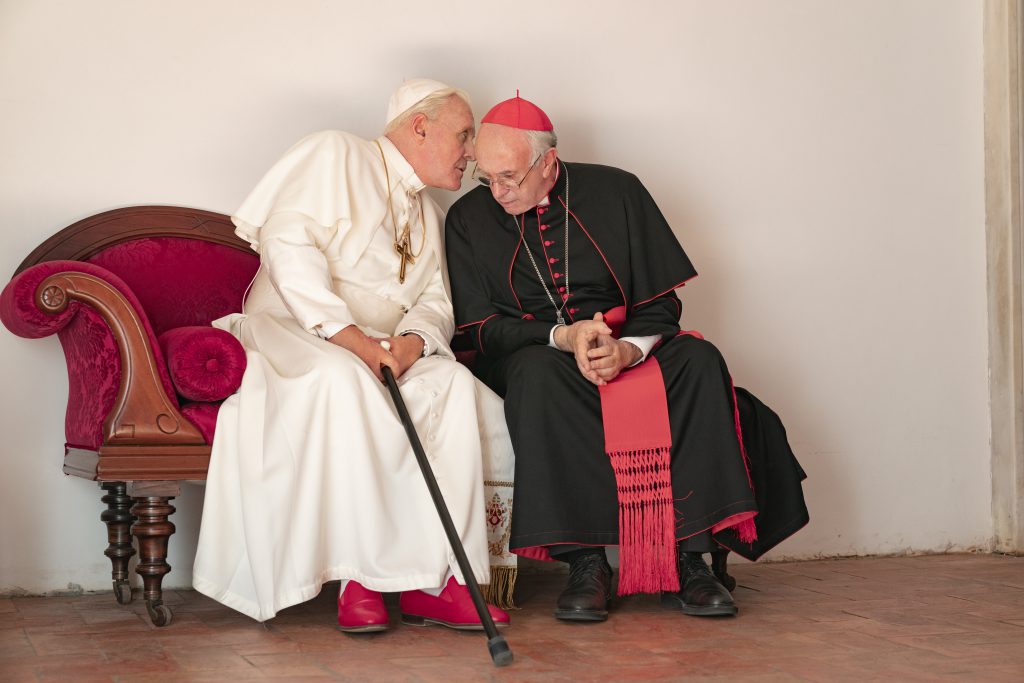 Anthony Hopkins and Jonathan Pryce in ‘The Two Popes.’ Photo by Peter Mountain.

There is a completely concocted moment at the papal conclave in 2005 that wound up choosing Joseph Aloisius Ratzinger as pope when he is in lunch line with then the second most popular candidate, Argentinean Cardinal Jorge Mario Bergoglio who is absently-mindedly whistling “Dancing Queen.”

Who is that by? asks German musical expert Ratzinger. “Abba” says Bergoglio, which is also the Aramaic name for Father not just the Swedish pop group, which clearly confuses the future pope.

It is an amusing setup for The Two Popes, an invented look at emeritus Pope Benedict XVI, who resigned in 2013 and had a pretty good idea who would succeed him, and the current Pope Francis.

The first question that needs to be answered is if there is any stinting or shortcoming by Netflix in concocting the sumptuous Vatican settings and international flavors of the story.  Absolutely not.  We can argue forever whether such movies are better seen with a crowd in theaters or absorbed alone at home, as is often case with Netflix. But the streaming service is making waves for the quality it brings to offerings, nowhere clearer than here with both Anthony Hopkins as Benedict nominated for Oscar best supporting actor and Jonathan Pryce, my personal choice for best actor for the dry honesty, smallest hints of humor and immediacy in his portrayal of Francis.

(If anyone thinks the decisions of the Vatican can be mysterious and manipulative, consider the Oscar best supporting actor category and how it is trying to maneuver the voters. There they are parking big names like Brad Pitt, Al Pacino, Joe Pesci and Tom Hanks along with Hopkins!)

The second question: Is this just a dry theological debate for Catholics? Not at all. It may be invented, except for moments when actual statements or encyclicals are paraphrased as if emerging in dialogue, and it certainly assumes a relationship that current events may not support, given that some interpret the retired pope in real life attacking Francis for his views on priestly celibacy.

But in the heartfelt challenges between the two, when (in the film) Benedict brings Francis back to Rome to explore stepping aside, Brazilian director Fernando Meirelles raises notable issues of the roads to God and to power. Plus he allows moments back in time to reveal Francis’ conflicts with celibate life (perhaps making a dry point by not doing so much background for Ratzinger).

With and without subtitles, the movie drives seamlessly through multiple languages, with time to make a joke about Benedict being most comfortable in Latin. It’s an ideological representation, far from history, but despite the buddy movie criticism from critics, it does delve deep and honestly into many issues we wish the two men would discuss!

Based on his own play (nominated for Oscar adapted screenplay), Anthony McCarten has provided amusingly intellectual dialogue and the genuine emotions as well as issues the two men faced. Pedophilia and bank finances are indeed explored. He does not hide how Ratzinger was accused of being a Nazi, much to the distress of Francis’ search for pastoral humility, not does he dodge (in fact makes a centerpiece) the guilt Francis felt as leader of the Jesuits playing footsie with an Argentine strongman regime.

In fact, these conflicts strengthen the sense of humility among pomp that two popes had to debate (though probably not so openly) in what remains a remarkable dual argument about the church’s future. In real life, it does seem that Benedict has grown healthier and more open since stepping aside and that Francis has found a more formidable voice of leadership — both realities that fit this manufactured exchange.

The movie more weakly suggests that soccer brings the men together, but The Two Popes lives and breathes on the moments of humanity the actors find under the robes and formal prayers, with Pryce particularly natural in how he achieves that outcome. A simple meander in the garden by him speaks volumes.