Greta Gerwig’s screenplay and direction not a major improvement on past film versions. 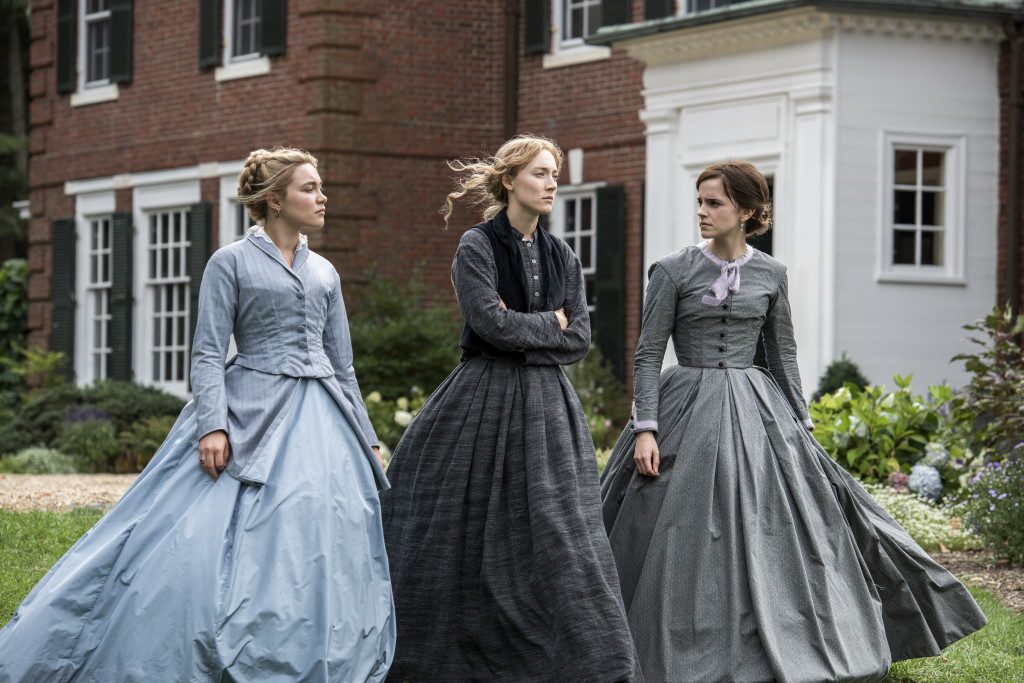 There are some strong performances, some coordinated weepy moments, beautiful landscapes, music and costumes and a constant effort to add a contemporary feminist insight, but overall Greta Gerwig’s Little Women fails to knit together as a major improvement on the “Little Women” on film parade, particularly the 1994 version. The movie has been nominated for six Academy Awards, including best adapted screenplay for Gerwig, though she did not get a best director nomination some expected.

Her version breaks into out-of-sequence pieces the traditional way of telling this coming-of-age tale of four Civil War era sisters and their Marmee – a gingerbread household that so entranced readers and moviegoers in Louisa May Alcott’s novel.  This time we encounter the sisters first after they are already plunged into their adult concerns, flashing back to their childhood interactions. Audiences must stay alert to changing hairstyles, sets and costumes to know where they are.

It is more “Women” than “Little” since we lose some of the charms of growing together out of childhood vanity and attitudes and there is limited payback in exploring the era’s attitude toward women and the expectation of marriage as the only way out. However, that change allows a truly fine performance from Florence Pugh (nominated for best supporting actress) as the usually just self-centered Amy March, an inevitable bride who is given a strong interpolated speech about a woman’s place on the economic and social scale.

There is a growing sense that Amy’s own anger and maturity should serve as the story’s centerpiece. This despite the fact that it is told mainly through the luminous close-ups of Jo March, played at an angular independent gallop by Saoirse Ronan. Nearly every time she wakes up we are in a different time cycle even as the film hits such familiar touchstones as taking food to impoverished neighbors or playing the grand piano at the Laurence mansion across the way, or acting out some of Jo’s outlandish attic dramatics — or attending posh events and a bulging breakfast table that seem straight out of an MGM fairytale.

Where this breakup of traditional storytelling works is combining the early illness and then too early death of sister Beth (played with innocent ruddiness by Eliza Scanlon) into the film’s extended emotional highlight.  Where it doesn’t work is convincing us that seeing how the sisters are turning out will add constant dimensions to where they started. Frankly, the main thing we become aware of is that they are a bit too old for the flashbacks.

Emma Watson is fine as the early married Meg suffering desire for riches and then thinking less of herself for such thoughts, another elaboration by director-screenwriter Gerwig.

But Gerwig’s most violent changes stem from seeing Jo as author Alcott herself who had some outrageous feminist daring for  the times, adding a romantic ending to sell the book but insisting on keeping the royalties to support her family.

The good thing? This is the first “Little Women” to make the ardor of writing much more than a throwaway. The bad thing? Elevating Jo’s authorship into creating the Great American Novel, which the book ain’t. Yet the pages are laid out on the floor and the cover medallion polished into auteur absurdity. Subdued dangerously is any sense of how Alcott learned to set aside Gothic flourishes and write about her own life, particularly her memories about Beth that elevated the original novel past being treated as some girly romance.

There are some stellar cameo performances – Meryl Streep as an acid Aunt March and Chris Cooper as the rich and quietly moving grandfather next door. As Laurence, the handsome and thin Timothee Chamalet is nearly blown off the screen by the stronger actresses around him. Laura Dern provides a warm centered Marmee and Tracy Letts as the all-knowing editor survives some terrible overwriting.

I liked the film’s occasional impromptu excursions, such as when Jo plops to the ground in the middle of one of cinematographer Yorick Le Saux’s incredibly sumptuous landscapes or when some wild dancing shows off Jacqueline Durran’s costumes And there is also a composer name that should be growing on moviegoers, Alexandre Desplat.

Like 2018’s “Lady Bird,” this Gerwig film may be suffering a case of media overselling, since she is half of movieland’s current golden couple (with director Noel Baumbach). Talented she is, but visionary she is not yet. The danger of Gerwig reveling in her own screenplays still exists.